Crickets Fight it Out at China’s National Championship 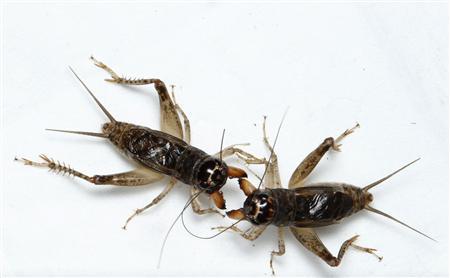 After being banned during the Cultural Revolution, cricket fighting (斗蟋蟀), a traditional Chinese pastime dating back to the Tang Dynasty, experienced a renaissance in recent years. With autumn upon us, cricket fighting season is in session, and Reuters reports from the National Cricket Fighting Championships in Beijing:

“I raise crickets as a hobby because I admire their positive spirit,” said Man Zhiguo, a truck driver who has been involved in the sport for more than 40 years. “They never admit defeat, they have a fighting spirit, so we all like them.”

[…] The insects have a lifespan of 100 days or so and are in their prime in the autumn. Every year, 25 major cities in China hold regional fights and the winners advance to the prestigious contests in Beijing.

At the national championships, each team was allowed 35 crickets and each insect was weighed and labeled the day before the competition. [Source]

WTVY CBS News 4 in Dothan, AL provides some visuals from the championships: