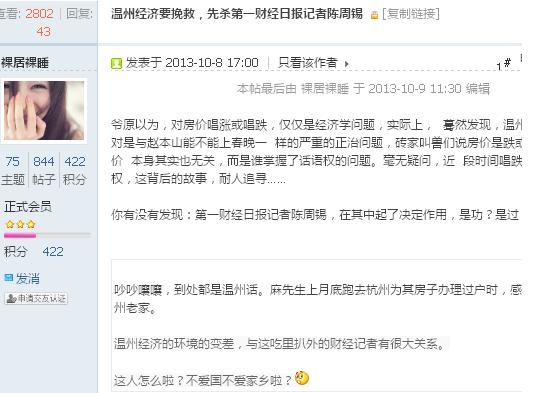 On October 8, administrators of the popular Wenzhou message board 703804.com discovered a post made by a user named “Luoju Luoshui”. The post entitled “If you want to save the Wenzhou economy, first kill Diyi Caijing Ribao reporter Chen Zhouxi” incited an uproar amongst forum readers.

Administrators deleted the post, but it re-appeared the next day, complete with a multiple choice voting poll, where the options were “kill”, “do not kill”, and “abstain from voting”.

“The changes in Wenzhou’s economy and the actions of this double-crossing finance reporter are connected,” a section of the post read. “All of the negative reports about Wenzhou were done by him … For the sake of Wenzhou’s economy, it’s necessary for Chen Zhouxi to become a victim of the system.”

[…] In statements released in a Diyi Caijing Ribao follow-up article after the incident, Chen speculated that the forum post had been motivated by a number of articles he had written about the regional economy of Zhejiang province – particularly the cooling housing market in Wenzhou city. [Source]

Read more about violence against journalists in China, via CDT.