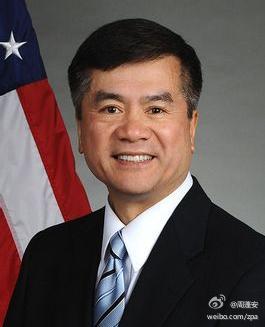 Gary Locke’s decision to step down as U.S. ambassador to China has given rise to much speculation among Chinese netizens. The Wall Street Journal Reports:

As one user of China’s popular Sina Weibo microblogging platform speculated: “The haze in Beijing is so bad that Gary Locke couldn’t take it anymore.”

“Even his family left” because of it, said another.

[…] At least one user speculated that the ambassador was leaving in part because of frustration related to the excessive spending habits of China’s bureaucrats. “He probably couldn’t take the gap between how China and the U.S. spend their public funds,” he said. [Source]

Locke’s modesty and humility as an official has gained him a lot of praise from Internet users in China. From Offbeat China:

Chinese netizens love Locke, and that love began even before his arrival in Beijing. A photo of him shopping at a Starbucks with a backpack at a US airport went viral in China before his assignment started. Chinese netizens were “shocked” because a Chinese official at his level would never pay for his own coffee or carry his own bag.

Locke won hearts for his humble manners, for his honest, and for the fact that he is the dream official that many Chinese have hoped to have but never did. His popularity, however, may be part of the reason why he resigns.

“Though Locke simply behaves like all ordinary US officials do, he actually violates all of the unwritten rules of China’s officialdom. He is isolated.” One netizen 徐付群 commented. Another netizen 浪漫拉马丁 commented: “His humble manners and his promotion of PM 2.5 awareness are like a slap in the face of those authoritarians.”

[…] “Locke is like a mirror, reflecting the true faces of officials in China. At the same time, he is a window, through which the Chinese people are given a chance to get a taste of the American way of being an official. The Chinese people admire his ‘close-to-the-people’ working style.” Commented netizen 老徐时评. But unfortunately, Chinese officials, as one netizen 李小勇宁宁宁 pointed out, “won’t be more like Locke.” [Source]

Locke responded in an interview with the Los Angeles Times that his reasons for resigning were purely personal:

“We wanted our kids to have junior and senior year of high school back in the United States,” Locke said in a telephone interview on Wednesday from the Beijing Capital International Airport, where he was about to fly on a trade mission to Kunming in southwestern China.

Locke said he had personally informed President Obama of his decision to resign and that the president was supportive. “He is facing the same situation with his older daughter, Malia, who will be heading off to college in a few years,” Locke said. “He is very aware of how fast our children are growing up and how little time we have with them.”

[…] Locke denied speculation in Chinese social media that his family had been sent home because of Beijing’s notoriously hazardous air quality.

“Absolutely not. We are concerned about it [air quality], but that’s not what motivated us to go back,” he said. [Source]

Shan Renping at Global Times writes that the Chinese public’s opinion of Locke and his tenure comes from “Chinese expectations.”

Looking back, Locke is a “normal” US Ambassador to China. The unusual stand and image of him in the eyes of Chinese public in fact stem from Chinese expectations. Chinese public opinion should become more mature after taking a close look at Locke for over two years. The Chinese public needs to deepen their understanding of national interests. Locke’s Chinese American identity and affable face made some take him as “Chinese.” However, he soon displayed his loyalty to US national interests.

There are incidents such as former Chongqing’s police chief Wang Lijun and blind activist Chen Guangcheng fleeing to the American Consulate and US Embassy. But Sino-US ties kept their forward momentum while he was in office. It is time when high-level visits took place and the two countries started discussing “a new type of major power relationship.” Locke stressed that he reduced the waiting time for Chinese visa applicants. Chinese people visiting the US and US export to China both witnessed growth. In general, from the perspective of both the US and China, Locke’s performance shouldn’t be given a low mark.

But he also caused controversy as details of his work and life were exposed in the Chinese media several times. It was also under his charge that PM 2.5 data monitored within the US Embassy was openly released to the Chinese public, causing a sensation. The related coverage, while showering admiration on the US Embassy and Locke himself, channeled discontent toward certain parts of domestic governance. [Source]