In Remote Village, Xi Jinping is Asked: Who Are You? 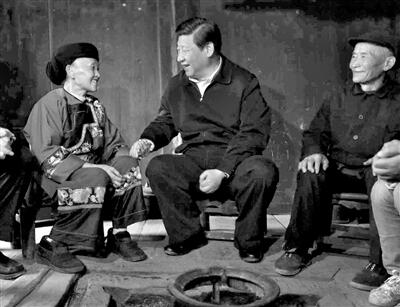 An encounter on Xi Jinping’s latest visit to the countryside underscores the extent to which China’s development remains unevenly distributed. From Austin Ramzy at Sinosphere:

China’s top leader, Xi Jinping, had come to Shibadong village to gauge conditions in a poor corner of Hunan Province. Upon entering the home of a family whose sole electrical appliance was a fluorescent bulb, the most powerful man in China was asked by the 64-year-old matriarch, “What do I call you?,” according to a report from Xinhua, the state-run news agency. It was a polite way of saying, “Who are you?”

[…] His trip to a remote region of Hunan is a reminder that, while China now has nearly 600 million Internet users, there is another half of the country’s population without Internet access. In the case of Shibadong village, there are people without televisions or the means to readily know, outside perhaps the occasional newspaper, just what the country’s leader looks like. [Source]

That state media covered the potentially embarrassing episode, Ramzy adds, highlights the contrast between Xi’s down-to-earth public image and that of his more aloof predecessor, Hu Jintao. Xi is not unfamiliar with rural poverty, having spent his late teens and early twenties in the Shaanxi village of Liangjiahe during the Cultural Revolution. See also Xi’s highly publicized visit to the Hebei village of Luotuowan in January, via CDT.

As the Party’s Third Plenum approaches, meanwhile, others are also trying to work out who Xi is.