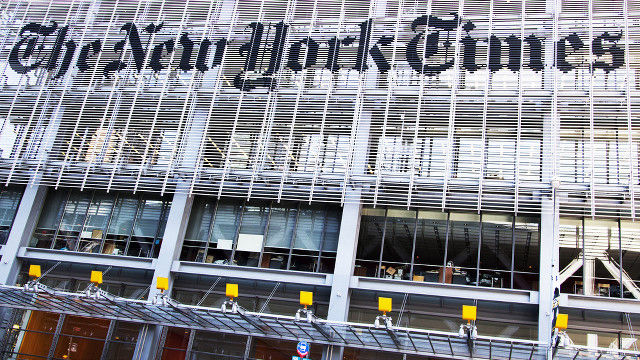 Reuters reports that Chen Guangbiao (aka Chen Ditan—”low-carbon Chen”), the billionaire recycling tycoon and former canned-air salesman known for pulling eccentric publicity stunts, has announced that he is looking to buy a controlling stake in the New York Times Company:

An eccentric Chinese recycling magnate said on Tuesday he was preparing to open negotiations to buy the New York Times Co..

[…] Chen says he is perfectly serious in his bid to buy the Times, which he said he had been contemplating for more than two years. He said he expected to discuss the matter on Jan. 5, when he is due to meet a “leading shareholder” in New York.

“There’s nothing that can’t be bought for the right price,” Chen told Reuters.

It is unlikely that the Times, which has long been controlled by the Ochs-Sulzberger family, would sell to Chen.

[…] Chen said if he was unable to buy the New York Times, he would settle for becoming a controlling stakeholder, and failing that, would simply buy a stake. [Source]

New York Times’ websites have been blocked in mainland China since publishing an investigative report on the family wealth of former Chinese premier Wen Jiabao in October of 2012. Since then, the Times has reportedly been the target of  hacking attacks based from China. While Chen mentioned (in his characteristically philanthropic tone) that he would set his sights on another major U.S. media outlet if the deal failed to go through, he also said that he could work to repair the paper’s image and access to the Chinese market if granted controlling stake. The New York Times reports:

In the telephone interview, Mr. Chen said, “If I can get this deal with The New York Times, I will be able to bring more positive images and influence to contribute to world peace and make the world a better place.” He added, “If the deal breaks off, I will keep searching for another credible and influential media company in the U.S. to achieve my goal.”

[…] Mr. Chen said he would work to repair The Times’s image in China, and also improve the paper’s understanding of the country.

“My plan for The New York Times if I get the deal will be putting the paper on every newsstand across the country and making The Times accessible to every Chinese household. China is such a big market and is too big to miss,” he said. [Source]