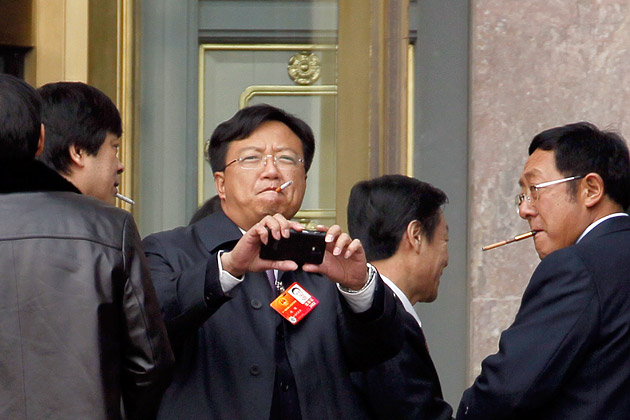 Xinhua reports that China’s State Council and the Party’s Central Committee have banned government officials from smoking in public alongside efforts from authorities to enact a national public smoking ban.

According to a circular from the Communist Party of China Central Committee and the State Council, officials are not allowed to smoke in schools, hospitals, sports venues, public transport vehicles, or any other venues where smoking is banned.

Government functionaries are prohibited from using public funds to buy cigarettes, nor are they permitted to smoke or offer cigarettes when performing official duties, the circular notes.

[…] The sale of tobacco products and advertisements will no longer be allowed in Party and government offices. Prominent notices of smoking bans must be displayed in meeting rooms, reception offices, passageways, cafeterias and rest rooms. [Source]

The ban on smoking will end “a decades-old tradition” that had been embraced by bureaucrats and top leaders, including Mao Zedong and Deng Xiaoping. From The Atlantic:

In a tell-all biography, Mao’s personal physician wrote that the leader responded with a joke when he criticized Mao’s chain smoking, saying “Smoking is also a deep-breathing exercise, don’t you think?”

[…] China’s current generation of top leaders, though, are a marked contrast to their predecessors ones: none of the current members of the Central Politburo Standing Committee, the all-powerful seven-man group that runs the country, are smokers. President Xi Jinping’s wife is a vocal anti-smoking campaigner. [Source]

Each year China’s tobacco industry produces more than 2.3 trillion cigarettes—40 percent of the world’s total—and is “one of the largest sources of tax revenue for the Chinese government,” as Brooking Senior Fellow Cheng Li wrote last year in a report (pdf) entitled The Political Mapping of China’s Tobacco Industry and Anti-Smoking Campaign. Li estimated that over the past decade, China’s tobacco industry “has consistently contributed 7-10 percent of total annual central government revenues.” By his calculations, that amounted to $95.2 billion in 2011.

Moreover, the tobacco industry has friends in high places—among them, Li Keming, who is both deputy director of the State Tobacco Monopoly Administration and Premier Li Keqiang’s younger brother. State-run tobacco farms and cigarette factories are also significant employers in many Chinese cities. [Source]

Nonetheless, the ban appears to represent a significant effort on the part of the state to curb smoking in a country known to be the world’s largest producer and consumer of tobacco. From The Wall Street Journal:

New rules signal that the drive to stamp out tobacco is “an endorsement from the top,” said Judith Mackay, a Hong Kong-based senior adviser to the World Lung Foundation, a health organization. “It’s a sea change,” she said.

[…] Health experts have been urging China to curb smoking as deaths mount and medical costs rise. China is the world’s largest consumer and producer of tobacco, home to more than 300 million smokers and 43% of the world’s cigarette production, according to the American Cancer Society and the World Lung Foundation. Tobacco is also a leading cause of death in China, causing 1.2 million deaths annually and expected to cause 3.5 million deaths annually by 2030, the groups said. [Source]

Meanwhile, 29 Shanghai hospitals have been blacklisted by authorities for failing to control smoking on their premises. From Shanghai Daily:

Those blacklisted include three well-known maternity hospitals, one leading pediatric hospital and some big hospitals. The list was put up on the official microblog of local health authority and the city government yesterday.

The authorities faulted the hospitals for lack of no-smoking signs, especially on the stairs, elevators, corridors and restrooms, and a lack of staff to deal with people smoking on the premises.

Patients’ families were found smoking outside surgery rooms and some hospitals had staff smoking inside their offices. Designated smoking areas were also an area of concern.

Some hospitals had indoor smoking areas while others allowed people to smoke outdoors but  were too close to people. [Source]