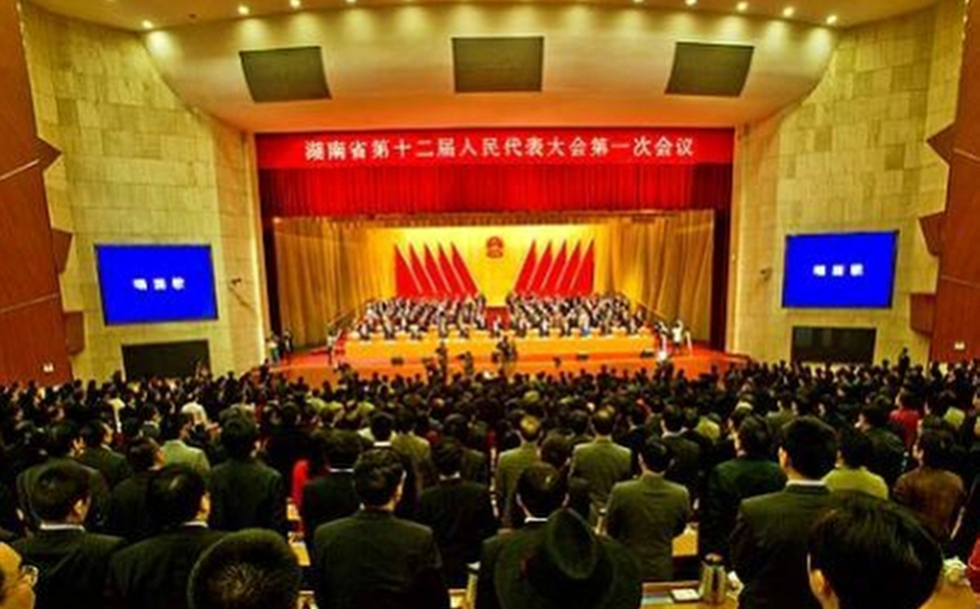 The South China Morning Post reports that lawmakers have resigned in mass in Hengyang city, Hunan province after a massive bribery scandal led to the sacking of 56 provincial legislators:

The massive vote-buying scandal that has already decimated the local people’s congress in one Hunan city exposes deep-rooted problems in the country’s legislative system, analysts said.

The case centred on Hengyang – the province’s second-largest city – reveals the potential scale and scope of the bribery as local officials, businessmen and others pay off lower-ranking colleagues to secure promotions.

In all, 56 provincial legislators from Hengyang have been sacked amid allegations that they bribed 518 local lawmakers in exchange for their votes. The local lawmakers, who have all resigned, are accused of accepting more than 110 million yuan (HK$139 million) in illicit payments.

“It’s not something limited to Hunan, but a broader problem inherent in the flawed legislative election system on the mainland,” said Xiong Wei , of the New Enlightenment Institute for Citizens’ Participation.  [Source]

Reuters’ coverage further describes the levels of China’s people’s assemblies, and the local-level democratic experiment that has been corrupted in Hengyang:

China does not have fully democratic one-man, one-vote elections but has experimented with a selection process at the grassroots for local legislatures, even if most candidates are Communist Party members and there is rarely more than a single candidate for each position available.

Provinces, cities, counties and other administrative districts all have their own People’s Congresses, and they all generally act as a rubber stamp for party decisions rather than providing a forum for debate or making policies.

The competition, though limited, to become lawmakers in some places has opened the door to corruption, as membership of such bodies brings opportunities to influence decisions about things such as business contracts and promotions.

Xinhua said that those found to have broken the law in this bribery scandal would be handed over to judicial authorities for prosecution. [Source]

Bloomberg puts Hengyang into the wider context of ongoing crackdowns on corruption in China, noting that experimental local-level elections may have opened a door for bribery:

The cash-for-votes scandal was disclosed less than two weeks after the party’s anti-corruption watchdog said Tong Mingqian, a vice chairman of the province’s political advisory body and former party secretary of Hengyang, was being probed. Hu Guochu, the head of the city’s congress, has also been removed and is under investigation.

Xinhua’s report named Tong as “directly responsible” for the corruption. Hunan’s procuratorate has started an investigation into the fraud, Xinhua said in a report late yesterday.

“This is just the tip of the iceberg, it’s a very common problem,” said Qiao Mu, director of the Center for International Communication Studies at Beijing Foreign Studies University, who unsuccessfully stood for election to the Haidian District People’s Congress in 2011 as an independent candidate. “In a closed election like this where candidates know who the voters are, there’s more likely to be corruption. If you pay for votes you won’t necessarily win, but if you don’t you’ll definitely lose.”

The problem has become more widespread since the party introduced competitive elections at local level a few years ago, said Qiao. Becoming a member of the congress is attractive because it bolsters reputations and opens up a network for contact with politicians and business people, he said.

“When there was only one candidate for one position there was no need to bribe anyone, because you were guaranteed the seat,” he said. “But now there are 10 percent more candidates than seats.” [Source]

The Hengyang scandal and mass resignation comes amid an intensification of the Xi Jinping administration’s ongoing fight against Party corruption. Last week, the CCP Central Committee issued a five-year plan to guide the Party’s fight against internal corruption.