Corruption Probes Spread, but to What End? 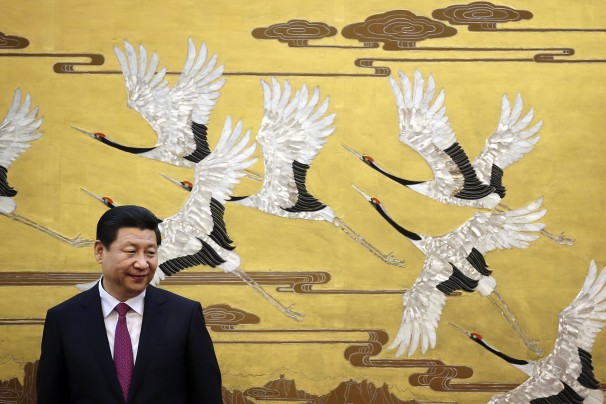 The Xi Jinping administration’s crackdown on corruption is spreading to the provinces, with a recent inspection tour of local governments by the Central Commission for Discipline Inspection, the official anti-corruption watchdog. From Reuters:

Taskforces working since May had found mismanagement and corruption in Jiangxi, Hubei and Guizhou provinces, along with the sprawling western city of Chongqing, the party’s Central Committee for Discipline Inspection said in a statement published on its website late on Thursday.

The statement gave no details on individuals or specific crimes, but noted cases of widespread graft and abuse of power. Corruption was also found at state-owned enterprises China Grain Reserves Corporation and the China Publishing Group Corp.

The Commission also sent an inspection team to the Ministry of Water Resources, where it said supervision of anti-corruption initiatives was “weak”.

In the poor southern province of Guizhou, a small number of officials had engaged in “trading power for money” and the probe had uncovered a high incidence of corruption in construction projects, land transfers and mineral extraction. [Source]

Chongqing, the former stronghold of convicted former Party chief Bo Xilai, was a notable target of the investigators, according to the South China Morning Post:

The most eye-catching destination was Chongqing, still smarting from the upheavals of the downfall of its former party chief Bo Xilai . Bo was sentenced to life imprisonment for corruption and abuse of power.

In a comment about the new Chongqing municipal government, Xu Guangchun, head of the Fifth Central Inspection Team, said the municipality had failed to impose sufficient checks and supervision over its top leaders, and certain leading cadres did not have firm political beliefs and failed to reach moral standards.

Xu also warned about “corruption risks” in state-owned enterprises in the municipality, pointing to rampant “fly-style” corruption – committed by lower-ranking officials – within the organisations. [Source]

In Anhui, Deputy Governor Ni Fake has been dismissed from his post and is awaiting prosecution on charges relating to corruption. From Reuters:

Ni Fake was sacked as deputy governor of the poor landlocked eastern province of Anhui in June, and his case has now been turned over to the judicial authorities for prosecution following an internal party probe, the Central Commission for Discipline Inspection said on its website.

Ni “used his official position to enrich others and to receive a massive amount of wealth directly or through relatives”, the statement said.

Ni was also “morally degenerate”, it added, without giving details, though this is often code for visiting prostitutes or keeping mistresses, both banned by Communist Party rules. He will be charged after being expelled from the party. [Source]

Meanwhile, more details have emerged about the case against former Railways Minister Liu Zhijun, who was given a suspended death sentence for corruption in July. During the trial of businesswoman Ding Shumiao, who is accused of facilitating Liu’s bribes, details have emerged about how Liu tried to bribe his way to the highest echelons of power. From the South China Morning Post:

The document [a draft of the court indictment against Liu] gives a rare glimpse into rampant money-for-power deals on the mainland. It is the first time an official at such a senior level has confessed to trying to further his career through bribery.

It also raises questions about who Liu tried to bribe, given that he was already a powerful politician and that only a handful of people could have helped him.

[…] The court heard yesterday that Ding bribed Fan, a former bureau director of the Poverty Alleviation Office under the State Council, to the tune of 40 million yuan because she wanted to “boost her image as a generous philanthropist”.

But sources said the money was paid as part of the carefully designed plan for Liu to advance his career. Liu hoped to first secure a party chief position at a local province – a prerequisite for him to move further up the ladder, according to the sources and the preliminary indictment. [Source]

As Ding’s case is revealing, the tangled relationships between powerful business leaders and government officials are opening the business world up to scrutiny as well. The Wall Street Journal reported last week on a number of business executives who have gone missing, notably in Chengdu:

Chengdu this month threw open its doors to what is perhaps the world’s biggest building in terms of square feet, essentially a town enclosed in a glass-walled box. Yet New Century Global Center’s owner and visionary, Mr. Deng, hasn’t been seen since February. In May, websites advertised plans by Chengdu’s government to auction a fleet of fancy cars seized from Mr. Deng and others, including his orange Lamborghini.

Mr. Deng’s company, Exhibition & Travel Group China, says that its operations are running as usual but that it doesn’t have any information about the boss. Neither he nor the other magnates were able to be reached to comment.

In the absence of much official explanation, employees and associates of missing business executives say they believe Chinese legal authorities and Communist Party investigators are holding them. Interviews with the employees and associates suggest a broader effort to root out a group of people connected through political and business ties. As Xinhua news agency put it when tycoons were toppled in a probe of senior officials six years ago in Shanghai: “Behind each corrupt official lurks a business big shot.” [Source]

In a report today, the Washington Post looks at how Xi’s anti-corruption movement intersects with a crackdown on free speech. The endgame for the anti-corruption campaign is not yet clear, but it is unlikely to lead to substantive political reforms, according to the article:

Xi realizes that Chinese people are angry about corruption, but his attempts to address the problem will almost inevitably fall short, experts say.

“There is a pretty hard and deep and wide attempt to look at everybody’s books,” said Jeremy Goldkorn, the founder of a media research firm in Beijing. “But what will inevitably happen is: one, it will be used to pursue vendettas, and two, because they won’t give up press control, because they won’t open up the party to outside scrutiny — because they are not able to address the systemic problems — it won’t be effective.”

[…] “The main single ferocious idea of the party is that there is not going to be a Chinese Gorbachev,” said James Mann, author of “The China Fantasy,” a book that aims to explode the assumption that economic progress inexorably leads to democracy.

“They are committed to a collective leadership, where nobody can get too far out in front of the others. They are not open to restraints on the power of the party,” he said. There was no reason to think Xi wanted to relax the party’s hold on power, he added — “and if he did, he wouldn’t be allowed to.” [Source]

For more on this topic, see “Bo’s Arrest was About Politics—But His Verdict May Have Been About Corruption” from Jamestown Foundation, and “China corruption trials risk erosion of party legitimacy” from the Financial Times. See also all CDT posts on the current and former anti-corruption campaigns.