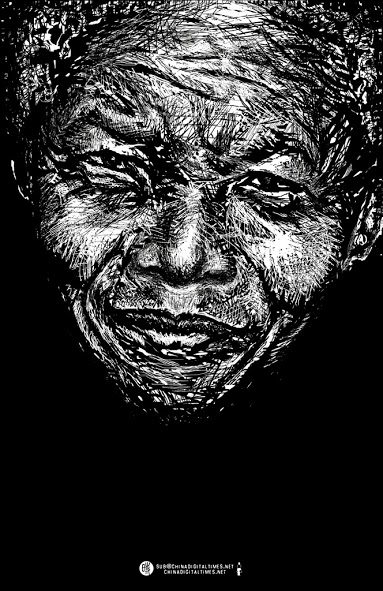 Some 80,000 had been expected, but the venue was two-thirds full as the ceremony got underway in rain that had been falling since the early morning.

In a keynote speech, South African President Jacob Zuma said Mandela was “one of a kind.”

“There is no one like Madiba,” Zuma said, using the clan name by which Mandela was fondly known.

In his speech, US President Barack Obama eulogized Mandela as a “giant of history” and compared the Nobel peace laureate to Mahatma Gandhi, Martin Luther King Jr. and Abraham Lincoln.

[…] China’s Vice President Li Yuanchao, special representative of Chinese President Xi Jinping, delivered a speech at the memorial, describing Mandela as the pride of the African people who had dedicated his entire life to the development and progress of the continent. [Source]

The South China Morning Post has more on Li’s response to Mandela’s passing:

Li, who will be in South Africa until tomorrow, said Mandela spent all his life advocating and implementing racial equality and reconciliation.

That sentiment was echoed by Chen Yuling, president of the South Africa Chinese Education Foundation, who said her heart was broken as if she had lost an old friend or a family member when she heard of the former South African president’s death.

“When Mandela was in office, he visited Beijing twice, and he also liked to visit Chinese companies and Chinese people’s homes. I had the honour to meet him face-to-face a few times. Mandela was a very kind, wise, broad-minded person,” Chen said.

Fang Wubin, a Chinese entrepreneur in South Africa, could hardly speak through his tears as he described Mandela as a good friend of the Chinese people. “When I saw the horrible news on TV, I could not help but cry … The flag in the courtyard of my company [is] half down, and I hope Mandela will live well in heaven,” Fang said. [Source]

In their liveblog of the proceedings, the Guardian reported that Li was booed by the audience as he was introduced, in a sign that China’s relations with South Africa remain more complicated than they are often portrayed in the official media.

President Xi Jinping is one of a handful of world leaders who did not attend the ceremony. As the Wall Street Journal’s China Real Times explains:

When asked why Mr. Xi wouldn’t attend the memorial, where U.S. President Obama among others will deliver tributes to the former South African leader, Foreign Ministry spokesman Hong Lei said President Xi had offered his condolences in a telephone call to South African President Jacob Zuma, in which he praised Mandela’s long-time struggle against apartheid.

Mandela is a complex figure in China, praised by the Communist Party as an icon in the struggle against imperialism but also admired by the party’s critics as a figure who stood up to authority. China called him “an old friend of China” the day after his death.

Mr. Hong didn’t say why Mr. Xi won’t attend himself, but added that dispatching Mr. Li as his special representative “fully demonstrates the attention attached by the Chinese government to the relevant arrangements made by the South African government.” [Source]

South Africa’s Independent Online reported other reasons Xi may have chosen not to attend:

This week, China will hold its Central Economic Conference to discuss reforms with which Xi is closely associated.

“There’s no way he could get there and back in time,” said [Center for Strategic and International Studies’ Chris] Johnson.

Jean-Pierre Cabestan, a political science professor at Hong Kong Baptist University, said Xi has delegated many such tasks to Li.

Communist Party leaders also don’t want to send the wrong signal to their people, he said.

“They don’t want to give too much publicity to the funeral of someone who spent 27 years in jail fighting against injustice and apartheid,” Cabestan said. [Source]

Mandela has been hailed as a hero by Chinese leaders and official media, largely due to his decision as president to cut South Africa’s ties with Taiwan and reestablish them with the PRC. Nevertheless, due to his heroic status among dissidents as well, the Central Propaganda Department issued restrictions on reporting on the human rights side of Mandela’s legacy, as CDT reported yesterday. From the South China Morning Post:

The ministry ordered local media not to highlight Mandela’s remarks on human rights and democracy issues.

“All posts and comments on Weibo and blogs that take advantage of the funeral of Mandela to attack our political systems and state leaders must be deleted immediately,” the papers stated.

The orders also warned local media not to report on the relationship between Mandela and the Dalai Lama, and not to cover Taiwan-related issues during the funeral. Taiwan is a former diplomatic ally of South Africa.

[…] “We were told not [print] gossip. But content on the positive China-South Africa relationship are welcomed,” said an editor with a local media outlet. [Source]

And President Obama’s, which contains a pointed reference to, “leaders who claim solidarity with Madiba’s struggle for freedom, but do not tolerate dissent from their own people”:


Read more about the United States’ own complicated relationship with Mandela over the years, from the Washington Post.