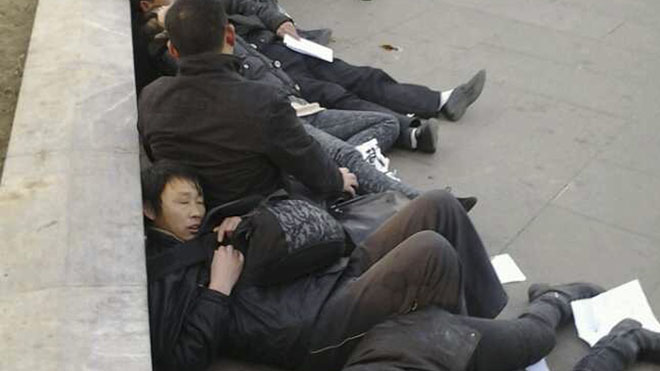 In a new show of desperation over forced demolitions of homes, a group of 12 petitioners from Wuhan drank pesticide in a group suicide bid in Beijing on Tuesday. From AP:

Wang, 40, and the others had traveled to Beijing from a district in Wuhan, the provincial capital of Hubei province, to draw attention to their complaints. Wang described the protest as a group suicide attempt.

“We have been petitioning for so many years, but either we have been dragged back home or locked in secret jails and beaten, and no one has been willing to help us,” Wang said by telephone. “We felt like there was no hope left.”

Each petitioner drank about 50 milliliters (1.7 ounces) of pesticide, Wang said, then lay down on the ground until police bundled them into vehicles and drove them to a hospital.

[…] Wang said the petitioners have been unsuccessfully seeking redress since 2010 for the razing of their homes by local authorities who provided little or no compensation. [Source]

Last month, Sinosphere reported a topical and patriotic protest against another forced demolition: a Jiangxi man erected a stone monolith engraved with gold characters reading “The Diaoyu Islands Belong to China. This House Belongs to Xie Taiyang.” Reporting on Wednesday on another man suing Shanghai authorities for an unprecedented $48 million over the demolition of his home museum, Sinosphere’s Austin Ramzy wrote that forced demolition is so common that only especially unusual cases or dramatic protests stand out:

The homeowner, Li Guangjia, asserts that the property and a collection of bonsai plants, unusual rocks and antiques he amassed over the past 20 years were worth 290 million renminbi, or about $48 million, and he is suing the Minghang district government in Shanghai for compensation.

Forced demolitions are a regular phenomenon in China. Local governments depend on land sales for a significant part of their revenue, and developers can make huge returns off building projects in cities where property values have climbed dramatically in recent years. Land is owned by the state, and residents’ rights to their property are often tenuous and easily overridden by powerful officials and businesspeople.

Evictions are so frequent that individual cases seldom grab public attention unless there is something unusual about them. […] [Source]

Read more about forced demolitions and petitioners in China, via CDT.