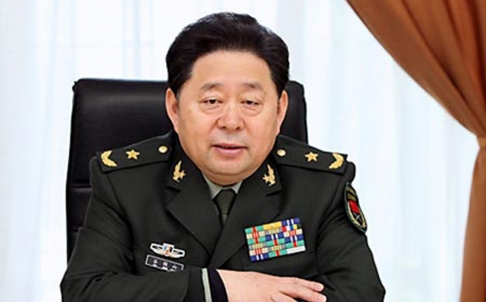 On Tuesday, Caixin began releasing a series of Chinese-language articles on the now two-year running corruption investigation into former PLA Lt. General Gu Junshan [zh], who was removed from his post in early 2012. An English-language report from Caixin gives a brief overview of the corruption that the probe into this once-influential PLA official has uncovered:

A two-year investigation into a former People’s Liberation Army deputy logistics chief has found that he personally benefitted from military real estate deals and building projects, sources close to the inquiry say.

During the tenure of Gu Junshang, deputy head of the PLA General Logistics Department who held the rank of lieutenant general, the PLA started large-scale building and renovation of soldier accommodation.

The official Xinhua News Agency said that from 2003 to 2007, the Central Military Commission spent 2.5 billion yuan to build apartments for retired military officials. Also, from 2005 to 2007, the logistics department spent another 500 million to renovate military accommodations.

Sources close to the investigation into Gu say he profited from the projects and land deals. The inquiry found Gu owns dozens of apartments in downtown Beijing. Gu told investigators the apartments were supposed to be gifts for other people, several source said.

Gu received a 6 percent “rebate” from a 2 billion yuan sale of a plot of land owned by the military in Shanghai, a source close to the investigation says. Gu and his relatives also profited from development projects in his hometown of Puyang, in the central province of Henan. [Source]

A report from the AP cites Caixin’s Chinese-language reporting to describe the secretive confiscation of Gu’s spoils from his Forbidden City-themed manor in Henan province early last year:

Under the cover of night, investigators last year hauled away four truckloads of plunder including gold statues and boxes of high-end liquor that were allegedly part of the ill-gotten gains of a Chinese general under investigation for corruption, a financial magazine reported.

[…] Caixin said military investigators catalogued the goods at one of Gu’s mansions during the daytime but confiscated them at night to avoid any public outrage over the items, which included a boat, statue and basin made of gold and countless cases of Moutai liquor.

“About two dozen military policemen in plainclothes queued up in two lines, facing each other. Boxes and boxes of special-order Moutai were transported to the two military trucks parked at the door,” Caixin wrote, describing the scene on the night of Jan. 12, 2013.

After the investigation began, Gu’s name was removed from official PLA rosters, an news related to him vanished from official websites. Gu’s trial is pending, and as the AP notes, details from it will likely be scant as he is expected to appear before a closed military court.

A report from the South China Morning Post, which also looks to Caixin’s extensive Chinese-language coverage of the case, describes Gu’s rise to senior official status as a result of his charm and connections, and not his military skills:

Colleagues of Gu Junshan said he was criticised for never paying attention to learning military discipline early in his career, but his emotional intelligence and personality made him popular with his bosses, who used him to solve their domestic problems, according to the news portal Caixin. A military researcher said in the state media in August that Gu, who was the PLA’s deputy logistics chief, was under investigation, but there has been no official word about the case.

Gu joined the army at 17 and was later taken under the wing of Zhang Longhai, then a commissar of the air force’s 16th division, according to Caixin.

Gu dated Zhang’s daughter and despite initial objections about his lowly rank the senior officer allowed them to marry. [Source]