Why China Needs a House of Lords for its Red Nobility 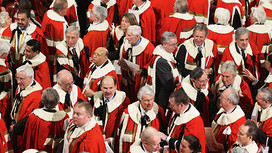 In a ChinaFile conversation, Columbia University’s Andrew J. Nathan tries to put himself in Xi Jinping’s head, and finds some prickliness at public perceptions of his princeling pedigree:

“They call us the Red Nobility. Considering how hard we worked to get where we are, I find that insulting. But there’s a grain of truth in it. Our fathers and grandfathers fought to put us where we are. Sure, mistakes were made. But nobody suffered more than we did. We survived and we put things back together; nobody thanks us for that. We are smarter, tougher, and better connected than the rest. No one else could manage this fractious country. We’ve done more: we’ve made a success of it. We’re the only ones who understand how the system works. That’s why we are in charge. So what if we enjoy some personal privileges along the way? We deserve it.” [Source]

At The Financial Times, Jamil Anderlini suggests that Xi should embrace and formalize the idea of a Red Nobility by converting the Chinese People’s Political Consultative Congress into a British-style House of Lords:

By reintroducing the titles and honours of China’s imperial past, President Xi Jinping, himself the powerful “princeling” son of a Communist founding father, would acknowledge and formalise the current reality.

[…] Even the common folk of China would probably be supportive of peerages because at least these would provide some explanation as to why Communist politicians and their relatives have accumulated so much wealth and power. [Source]

There is some precedent for the once unthinkable rehabilitation of imperial-era customs—see Evan Osnos on the post-Maoist revival of Confucianism, via CDT.