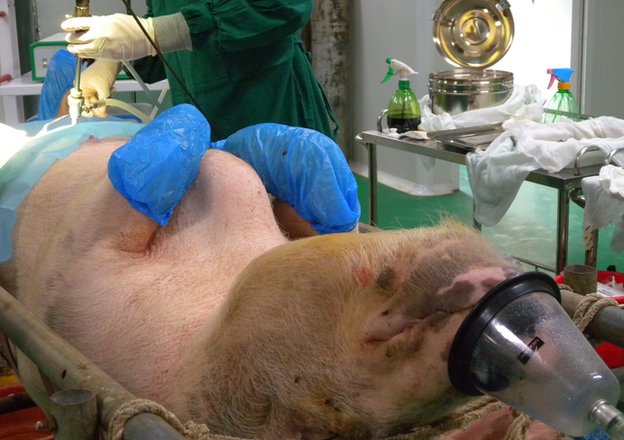 BBC science editor David Shukman writes that “China is on a trajectory that will see it emerging as a giant of science” after visiting a BGI “cloning factory”, where the world’s largest gene sequencer produces pigs engineered for medical testing:

One batch of particularly small pigs has had a growth gene removed – they stopped growing at the age of one. Others have had their DNA tinkered with to try to make them more susceptible to Alzheimer’s.

Back at the company headquarters, a line of technicians is hunched over microscopes. This is a BGI innovation: replacing expensive machines with people. It’s called “handmade cloning” and is designed to make everything quicker and easier.

[…] “If it tastes good you should sequence it,” [chief executive Wang Jun] tells me. “You should know what’s in the genes of that species.”

Species that taste good is one criterion. Another he cites is that of industrial use – raising yields, for example, or benefits for healthcare.

“A third category is if it looks cute – anything that looks cute: panda, polar bear, penguin, you should really sequence it – it’s like digitalising all the wonderful species,” he explains. [Source]

BGI and its sometimes controversial work were the subject of a New Yorker profile last month. At Quartz, Gwyn Guilford describes the company’s particularly contentious efforts to identify genetic indicators of exceptional human intelligence, which it hopes could help parents select offspring from a number of embryos.

Half of China’s Antibiotics Now Go to Livestock