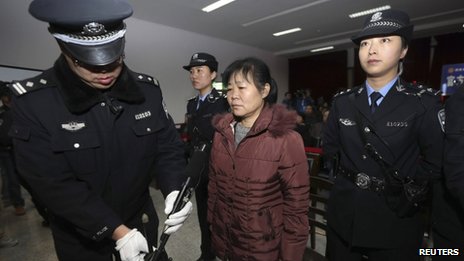 In August, Shaanxi obstetrician Zhang Shuxia was accused of selling a newborn child after convincing her clients that the baby was sick and would be a financial burden. In her court trial late last month, Zhang admitted that she had stolen multiple babies and sold them to human traffickers over the past two years. On December 31, AP reported:

Zhang told parents their newborns had congenital problems and persuaded them to “sign and give the babies up,” the court postings said. Calls to the Weinan Intermediate People’s Court and the local Communist Party propaganda department went unanswered.

The case exposed the operations of a baby trafficking ring that operated across several provinces centering on Zhang, who delivered babies at the Fuping County Maternal and Child Hospital.

[…] The indictment said that from November 2011 to July 2013, she sold seven babies to middlemen who sold the babies to “couples” in central and eastern China. Six of the babies were rescued, but one that was trafficked for 1,000 yuan ($165) in April later died. [Source]

An update from the AP reports that the court in Fuping, Shaanxi province has sentenced Zhang to a suspended death sentence, and situates this case into the larger context of child trafficking and medical corruption in China:

A Chinese court on Tuesday convicted a doctor of baby trafficking and sentenced her to death with a two-year reprieve, after she admitted in court that she stole babies from the hospital where she worked and sold them.

[…] Child trafficking is a big problem in China, despite severe legal punishments including the death penalty. Families who buy trafficked children are driven partly by the traditional preference for male heirs, a strict one-child policy and ignorance of the law.

The case has added to public frustration with China’s medical profession over rampant bribery and other abuses. [Source]

Coverage from the BBC relays comments from netizens leading up to Zhang’s sentencing:

On Chinese social media, netizens condemned Zhang’s actions, with many calling for the death penalty.

“She obliterated her humanity, and conducted unspeakable acts under a cloak of legality – only executing her will level the people’s anger!” microblog user China Luo Jian wrote.

However, user Wen Jin Rang wrote: “For such a criminal, sparing her life will serve a greater educational purpose than killing her.”

Meanwhile, Sina Weibo user Doctor Fei Ge described Zhang as the “scum of the medical profession, who damaged the reputation of doctors”. [Source]

Also see a picture gallery of the trial from CRI, or all prior CDT coverage of child trafficking.