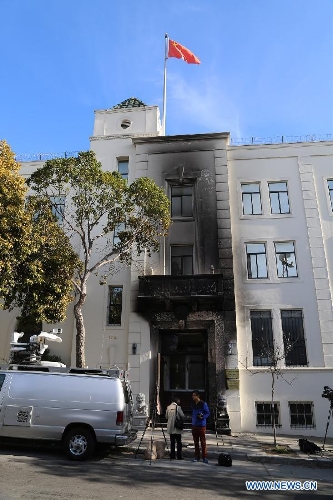 The FBI is investigating an arson attack on the Chinese consulate in San Francisco. From Sarah McBride and Adam Rose at Reuters:

“We strongly condemn this despicable attack,” said Wang Chuan, the consulate spokesman, reading from a statement at a brief news conference. “We urge the U.S. side to take all necessary measures to provide adequate protection for Chinese consular personnel and properties.”

[…] The San Francisco Fire Department said it received a report of a fire at 9:33 p.m. PST (0500 GMT), arrived on the scene within two minutes and brought the fire under control within six minutes, and has turned over the investigation to the Federal Bureau of Investigation.

[…] State Department spokeswoman Marie Harf said the United States is “deeply concerned” by the reported arson attack. “We take this incident very seriously,” she said at a briefing in Washington. She did not comment on whether security was being stepped up at the consulate or at the Chinese Embassy in Washington, and said she was not aware of any specific threats against the consulate. [Source]

The FBI has confirmed that the fire was started deliberately, according to the AP, but does not regard it as a terrorist act.

China’s Global Times accused American authorities of failing to protect the consulate, and of allowing attackers to feel that “they are being winked at”:

This is not the first time that the city’s Chinese consulate was attacked. Tibetan separatists once set fire to the premises right before the Beijing Olympic Games, and its walls were also sabotaged by oil paint. Given the recurrence of such incidents, the US government can hardly absolve itself from blame.

There is a question that remains unsolved: Why has the Chinese consulate become an easy target in the face of the strongest US security forces?

[…] Chinese Embassy and its consulates should have been more heavily protected by US security forces. However, a lack of hard crackdowns on those attackers has obviously made them feel they are being winked at.

[…] If it skimps on the job, the impression of the US in the mind of China and its people is snubbing and arrogant. [Source]