Life Working as a Model in China 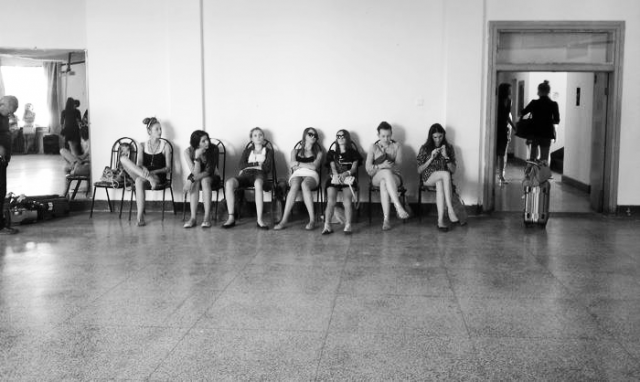 Freelance journalist and graphic designer Meredith Hattam gives an insider look at the unpleasant realities of modeling in China with a personal account of working for a Ukrainian-owned modeling agency in Beijing. From Fashionista:

In Beijing, I was one of 13 roommates, all models, most of whom were under 18 and from the Eastern Bloc. Nine girls, four boys, give or take, during the busy season. Lana was one of them, though she wasn’t the youngest. The youngest was 14-year-old Kate, a shy Ukrainian girl who, out of all of our roommates, worked the most — which, in industry-speak, meant that she was frequently in demand. Kate celebrated her 14th birthday two months into her contract, sitting down with us between jobs to eat a store-bought cake that we purchased with our pocket money. Most of her jobs were nine hours a day, requiring last-minute travel and hotel stays (usually with a handler and another model) to the homonymous cities that comprise China’s fashion economy: Shenzhen, Guangzhou, Hangzhou.

Our shabby, dorm-like apartment consisted of four bedrooms (two baths) for the 13 of us. When we arrived, I found I had no bed — only a stained, faded couch covered in a fake Gucci blanket, for which I was charged $500/month. As a model, inflated rent and poor living conditions are unfortunately industry standards. Rent is charged as part of your expenses and later deducted from any jobs you may (or may not) do — which is what makes booking them so important.

In Asia’s modeling industry, working under an illegal tourist visa is commonplace. Models are told by their scouts to say they’re visiting on vacation, putting them in a precarious situation in which they’re entirely in the hands their employers: If a model denies even one job, she may lose her contract and her apartment. She can’t work elsewhere, because she’s a tourist. And if her family or agency refuses to support her, she doesn’t have the financial means to get home. [Source]

The New York Times has more on Hattam’s account of the modeling industry in China:

This came from one of the more bizarre episodes in Ms. Hattam’s brief modeling career, when she was sent in September 2011 in a group of 40 models to the ancient desert town of Dunhuang to take part in a fake beauty pageant for Chinese tourists, complete with sashes, bikinis and nightgowns.

Ms. Hattam performed as Miss America. A model from Warsaw was appointed Miss India. And so on.

I walked. I waved. I smiled ­­ even as my trailing dress fell to my stomach, exposing Miss America’s stars and stripes to 4,000 Chinese strangers, who let out a collective gasp.