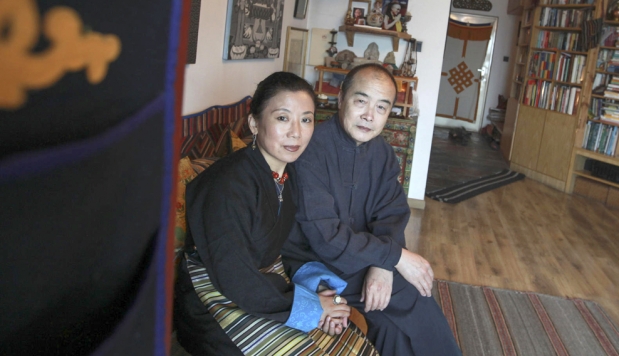 Editor and translator Violet S. Law delves into the lives of dissident literary couple Wang Lixiong and Tsering Woeser, co-authors of Voices from Tibet (2009), describing “the tortuous trails they have blazed to become noted writers.” From The South China Morning Post Magazine:

Wang Lixiong and Tsering Woeser, argu-ably China's most famous dissident literary couple, could hardly be more different as individuals.A Han Chinese hailing from the Manchurian northeast, Wang, 60, aired his budding interest in political reform as early as 1978-79, during the Democracy Wall movement. Born into an army family in the heady first year of the Cultural Revolution, Tibetan poet Woeser, 47, rediscovered her heritage as a young adult but only much later eschewed poetry for polemics. Wang is as vaguely pensive as Woeser is blithely vivacious. He seems to be shouldering the heft of China's future while she appears little scared, or scarred, by the constant surveillance and occasional house arrest she is subject to.By choice Wang acts the part of the traditional Chinese intellectual, sounding alarm about his country's looming woes. Woeser, it often seems, has been thrust into the role of fearless, feted chronicler of Tibet's tumults. Long before their marriage, in 2004, though, Wang and Woeser were united by their passion for the nation, as well as an unflappable faith in their freedom to speak truth to power. [Source]