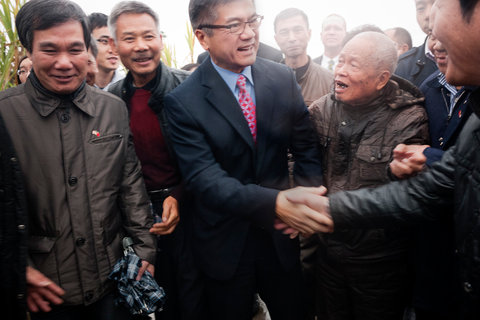 In light of Gary Locke’s December 17 visit to his ancestral home in Taishan, Guangdong Province, The New York Times’ China correspondent Edward Wong reflects on the meaning of Taishan, the “main origin point of the Chinese diaspora,” in his own life, revealing that he is a relative of the ambassador:

Mr. Locke and I share common ancestry. One of my great-grandfathers on my father’s side is a grandfather of Mr. Locke on his mother’s side. That man was a successful merchant of herbal medicine who lived mostly in Hong Kong and married twice. He had 17 children with the two women, and Mr. Locke and I are descended from different wives, my father once told me.

Last week, I reached Alan by telephone to ask him about documenting Mr. Locke’s last visit.

“Considering that my whole project here is on Toishan, and Locke is the most prominent Toishanese guy there is in the universe, and given the fact that he was visiting while I was here, I had to check it out,” Alan said. “Honestly, it was more of a show than I had expected. Since this was his fifth time here, I thought it would be more subdued.”[Source]

Locke resigned from the post in November and is expected to leave this month.