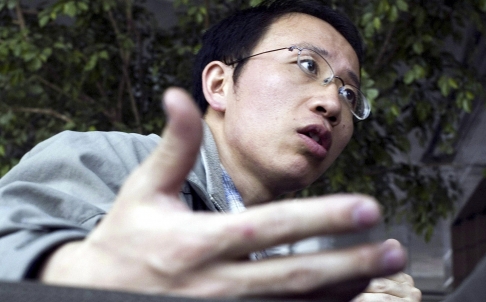 Following two rounds of police questioning in the past month, rights activist Hu Jia says he believes the authorities are building a new case against him, but that he has “no regrets.” Hu was previously imprisoned for three and a half years on charges of inciting subversion of state power. From Verna Yu at South China Morning Post:

During nearly eight hours in custody, Hu said he was repeatedly interrogated about comments he posted on Twitter on a number of issues, including him calling for a rally in Tiananmen Square to commemorate the 25th anniversary of the 1989 military crackdown, urging people to wear masks to protest at Beijing’s bad air, and calling on fellow citizens to follow the example of Ukrainians to stand up to an unpopular government.

[…] Because of the wide range of issues he was involved in, Hu said the authorities could arrest him on a number of charges, including “subverting state power”, “provoking and stirring up trouble”, “assembling a crowd to disrupt order in a public place”, and even secession charges because of his support for causes in Tibet and Xinjiang.

Hu said that when he was summoned last month, a police officer told him his alleged crime was “much more serious” than Xu [Zhiyong]‘s and he could receive a jail term three times longer than his. Xu was last month jailed for four years on the charge of “assembling a crowd to disrupt order in a public place”. [Source]

See more on Hu via CDT.