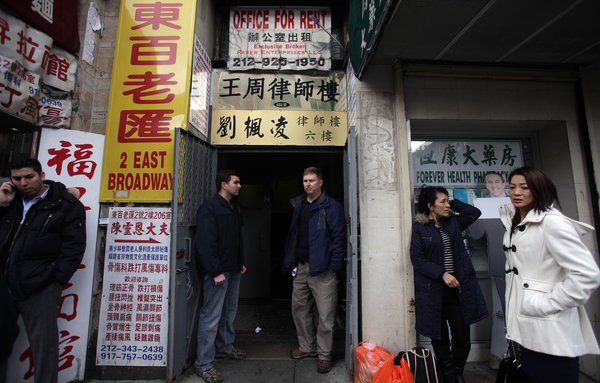 Kirk Semple, Joseph Goldstein, and Jeffrey E. Singer report on an official crackdown on fraudulent asylum-seeking in New York’s Chinatown, where at least thirty people have been prosecuted on charges of coaching clients with “false tales of persecution” to recite to immigration officials.  From The New York Times:

More Chinese immigrants apply for asylum than any other immigrant group in the country, with the Chinese population in New York leading the way: Over the past six years, about half of all applications filed by Chinese immigrants not facing deportation were submitted in New York City. (Comparable data for asylum applications from those in deportation proceedings was not available.)

In fiscal year 2012, Chinese immigrants filed more than 62 percent of all asylum cases received by the federal asylum office in New York, which in recent years has received more Chinese applications than the next 10 nationalities combined.

[…] Peter Kwong, a professor at the City University of New York and an expert on the Chinese population in New York, said it was an open secret in the Chinese community that most asylum applications were at least partly false, from fabricated narratives of persecution to counterfeit supporting documents and invented witness testimony. [Source]

At the Law Professor Blogs Network Professor at the University of California, Davis Kevin R. Johnson argues that the The New York Times report must be read with “caution” and that last December, “testimony by U.S. government and independent witnesses did not support an epidemic of fraud and abuse”:

[…] While there unquestionably is some abuse of the system (which no doubt is not limited to the Chinese immigrant community), it is unclear how widespread such abuse is and far from clear that reforms would not result in the denial of many bona fide asylum claims.  Recall that previous concerns with so-called asylum abuse led to controversial measures such as expedited removal, limitations on work authorization, and other restrictions on asylum claims (such as in the REAL ID Act of 2005).

The article also relied on the high rate of denials of Chinese asylum claims in New York as supporting the claim that abuse is rampant there. [Source]

See also a Facebook discussion on this story with comments from Professor of Law at George Washington University Law School Donald Clarke,  Chinese-American writer Kaiser Kuo, and others.