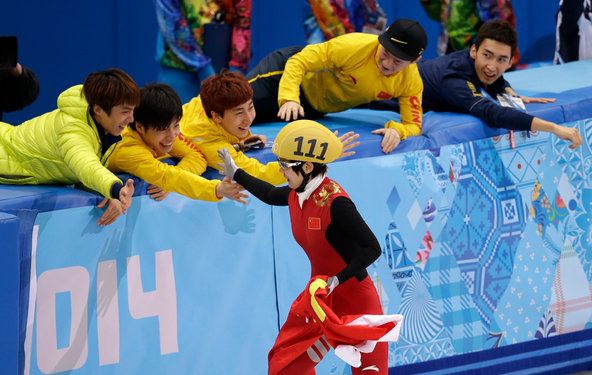 China is celebrating its first gold medals won Thursday in the women’s 500-meter short-track speed skating and the women’s 1,000-meter long-track. From Amy Qin at The New York Times:

The first gold medal was won by Li Jianrou, 27, who coasted to victory as the only woman not to fall during a slippery 500-meter short-track speedskating final.

[…] “Regardless of how hard we had to work, today it appears it was all worth it because our great efforts helped win a gold medal for our country,” Li wrote on her microblog account. “I feel honored to be this lucky winner.”

Hours later, Zhang Hong brought home the second gold medal for China, the country’s first ever long-track speedskating gold. It was a stunning victory for the 25-year-old athlete who competed in the seventh of 18 pairs and was considered by few to be a serious medal contender. [Source]

Meanwhile, back in Beijing, gay rights activists protested Russia’s anti-gay laws outside the Russian embassy. From Mia Li at Sinosphere:

Behind a rainbow banner that read “To Russia with Love,” a dozen activists cheered as three couples puckered up and kissed in front of a countdown clock for the Sochi Winter Olympics outside the embassy’s tall walls.

[…] “Putin has a very bad attitude towards gays, who have to live with the threat of violence,” said Xiao Tie, executive director of the Beijing Lesbian Gay Bisexual Transgender Center, referring to the Russian president, Vladimir V. Putin. “Russia still needs some education on diversity. That is the reason for today’s advocacy mission.” [Source]