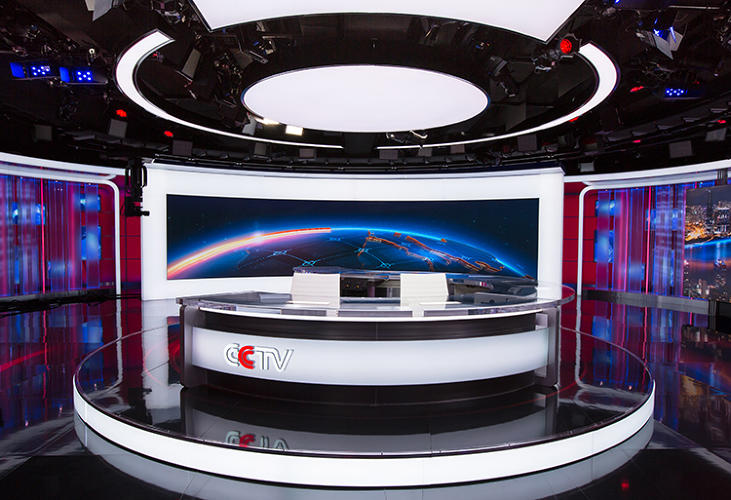 As China’s state broadcaster CCTV reaches out to the world, its flagship domestic news show is taking on a more international look. The New York Times’ Austin Ramzy highlights a Fast Company feature from last month on the construction of a new studio for Xinwen Lianbo by the creator of sets for several Western news stations, as well as their satirical counterparts The Daily Show and The Colbert Report.

“They wanted to be on a par with the BBC, CNN and Sky News — to be cutting-edge, and to be an equal,” Mr. Fenhagen told Fast Company, which first reported on the new set. “Money wasn’t the defining issue. They wanted the most contemporary tools and an ‘international style,’ not a Chinese look.”

CCTV has long been looking to rework its flagship news program, which was once closely followed but has gradually lost viewers amid competition from regional broadcasters and online media. China’s biggest state-run news outlets have also invested heavily in expanding overseas to help increase the country’s global clout.

[…] “CCTV’s new broadcast studio is truly top quality,” wrote Ding Laifeng, an editor for PR Magazine, a Chinese trade publication. “But the question is: If you’re constantly advocating Chinese characteristics, why use foreign design concepts rather than a Chinese model for your studio? And if you lecture people every day about the value of frugality, why did the studio designer say, ‘Money isn’t an issue’?”

[…] “What people care about isn’t a new studio,” read the headline of an article about the set in Orient Today, a Zhengzhou-based newspaper. “It’s the content of the news.” [Source]

See pictures of the new set at Fast Company. For more on Xinwen Lianbo, see a KDNET infographic on its history and changing looks over the years, translated by CDT.

The ritual recriminations had to be got out of the way. Chinese delegates complained that much British press coverage of China was biased and hostile, the product – according to one editor – of a “superiority complex”. The British contingent retorted that a function of Western media was to hold political power to account, and China should not consider itself singled out for harsh treatment. British journalists asked for wider access to China to allow them to report more broadly: the Chinese railed against the perceived western assumption that their media were nothing but mouthpieces of the state. “We criticise the government every day (…) You like to point the finger but we are more subtle.”

But the Chinese side had not come half-way around the world just to complain: they said they wanted to collaborate, brainstorm and learn. Several indicated that the rise of social media made them uneasy for their futures, and were anxious – in all senses – to trade ideas with their hosts. Broadcast news remained very much part of the Chinese plan: presenter Bai Yansong felt CCTV was only now developing into a “global station”.

[…] Chinese friends observe that the multi-national CCTV News in English “doesn’t look Chinese”. CNC World, the newer offshoot of the Chinese news agency Xinhua, may look more Chinese but even avid media-watchers in Britain admit they haven’t yet got round to looking at it at all. What image – or images – of China are being conveyed here? Are China’s English-language media intended to project China’s values or simply give Western viewers what they’re used to? The picture is confused. [Source]