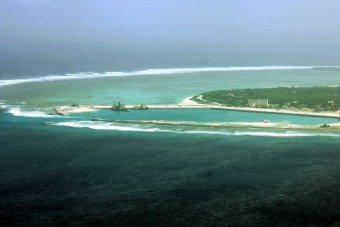 Reuters reports that the United States has emphasized its intention to defend both Japan and stability in the Asia-Pacific region “against a backdrop of increasingly assertive territorial claims by China”:

After a meeting with Japanese Foreign Minister Fumio Kishida, Secretary of State John Kerry emphasized the importance of the U.S.-Japan relationship, which both countries say remains robust in spite of a bump after Japanese Prime Minister Shinzo Abe visited a controversial war shrine in December.

Kerry said the United States and Japan were committed to closer security collaboration and stressed the long-standing U.S. commitment to defend Japan if it is attacked.

“I … underscored that the United States remains as committed as ever to upholding our treaty obligations with our Japanese allies,” Kerry told reporters after talks with Kishida. [Source]

Japan has in turn reassured the United States that it will attempt to foster dialogue in the region and “calmly” respond to “actions by China that have increased tensions between the two Asian powers.“  From ABC News:

After meeting Secretary of State John Kerry, Japan’s Foreign Minister Fumio Kishida said they agreed they will respond “calmly and with resolve” to China’s actions, including its recent declaration of an air defense zone over an area including the uninhabited, Japanese-controlled islands, which it calls Senkaku and China calls Diaoyu.

Like China, South Korea has been angered by a recent visit by Japan’s prime minister to a controversial war shrine in Tokyo, which has deepened resentment in both of the neighboring countries over Japan’s colonial past and abuses committed during World War II. Japan says it is willing to hold high-level dialogue with both nations to ease tension, but there appears little immediate prospect of that happening. [Source]

The Global Post notes that Secretary Kerry did not bring up the issue of Shinzo Abe’s visit to the controversial Yasukuni Shrine in his recent talk with Japan’s Foreign Minister Fumio Kishida:

Kerry, meanwhile, did not touch on Japanese Prime Minister Shinzo Abe’s visit to war-related Yasukuni Shrine in December, over which the United States had expressed disappointment.

“The United States remains as committed as ever to upholding our treaty obligations with our Japanese allies. That includes with respect to…the East China Sea,” Kerry told reporters after the meeting.

Kerry was referring to the 1960 bilateral treaty which obliges the United States to defend Japan. China has claimed the Japan-administered Senkaku islets in the East China Sea, frequently sending its ships into Japanese territorial waters near the Senkakus since 2012. [Source]

On the other side of the issue, the Chinese government-backed People’s Daily urges the U.S. to drop its “irresponsible” ADIZ remarks:

China on Saturday urged the United States to drop irresponsible remarks on the Air Defense Identification Zone (ADIZ) over the East China Sea to avoid detriment to stability in the region.

“It is a legitimate right for China, as a sovereign state, to set up the Air Defense Identification Zone over the East China Sea,” said Chinese Foreign Ministry spokesman Hong Lei, adding that the establishment of the ADIZ is in line with international law and norms.

Hong made the remarks when answering a question on U.S. Secretary of State John Kerry’s stance about the China ADIZ. [Source]

Update: Meanwhile, in the New York Times, writer Murong Xuecong writes about how Chinese propaganda movies have influenced attitudes toward Japan in the country:

Before television arrived in the countryside, film teams took projectors to villages to screen movies; they were often shown outdoors. As a child in the 1970s, I’d go to screenings as often as possible, blissfully unaware that most of what I was watching was Communist Party propaganda. I must have watched “Tunnel Warfare” and “Landmine Warfare” at least a dozen times.

When I turn on the television these days, I notice not much has changed. The second Sino-Japanese War may have ended in 1945, but the Chinese people are still haunted by it. Enemy Japanese soldiers run amok on Chinese screens. The state-approved films and TV dramas of today are more colorful and the actors are better-looking than in the films of 1960s and ’70s, but the themes remain the same.

The state prohibits content that “incites ethnic hatred,” yet according to Southern Weekly more than 70 anti-Japanese TV series were screened in China in 2012. [Source]