200 Refugees In Thai Slave Camp May Be Uyghurs 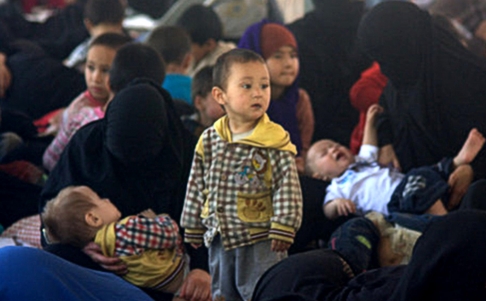 Police say the group claim to be Turkish, although they have no documents to prove it and none of them had spoken more than a few words of Arabic, even to local Thai Muslims who arrived to offer help.

However, police sources say, the group shows strong similarities to Uygur asylum seekers who have been detained in Bangkok.

[…] “These people will refuse to acknowledge Chinese citizenship to avoid being forcibly repatriated,” said Kayum Masimov, president of the Montreal-based Uyghur Canadian Society. “They will simply refuse to talk. They fear for their safety.”

Human Rights Watch spokesman Phil Robertson said when Uygurs “try to flee overseas, Beijing often pursues them relentlessly”. He added: “Over the past few years, there have been several serious incidents in Cambodia, Malaysia and Thailand where China has used its influence to demand Uygur refugees and asylum seekers be returned against their will to China.” [Source]

In 2011, Phelim Kine at The Washington Times urged President Barack Obama to address the 2009 incident when 20 Uyghurs seeking refugee status in Cambodia “effectively disappeared into official custody” after they were forced to fly back to China:

On Dec. 19, 2009, 20 Uighurs – a Muslim ethnic minority in China who have long suffered from state discrimination and other abuses – were forced onto a Chinese government plane in Phnom Penh, Cambodia, flown back to China and effectively disappeared into official custody. Since then, the only whisper of the fate of the deported Uighurs – who included two infants – was an unconfirmed report in mid-January 2010 that some of them had been sentenced by a Xinjiang court to verdicts that included the death penalty.

The group – which had sought refugee status in Cambodia – had been issued “persons of concern” letters by the United Nations High Commission for Refugees; under international law, those documents should have provided them protection from deportation. The Chinese government insisted that the 20 Uighurs were “criminals” to whom those protections did not apply. The Cambodian government ignored the high likelihood that the Uighurs would face torture, disappearance and/or arbitrary detention upon return to China, and under pressure from Beijing, Cambodia forced the Uighurs to return. Shortly after their plane left, Chinese Vice President Xi Jinping touched down for a high-profile state visit to Cambodia, suggesting that Phnom Penh prioritized Beijing’s demands over Cambodia’s obligations under international law. [Source]

Read more about recents events that have increased tensions between the Chinese government and Xinjiang’s Uyghur community via CDT.