China is Believed to Execute 1000s of People Every Year 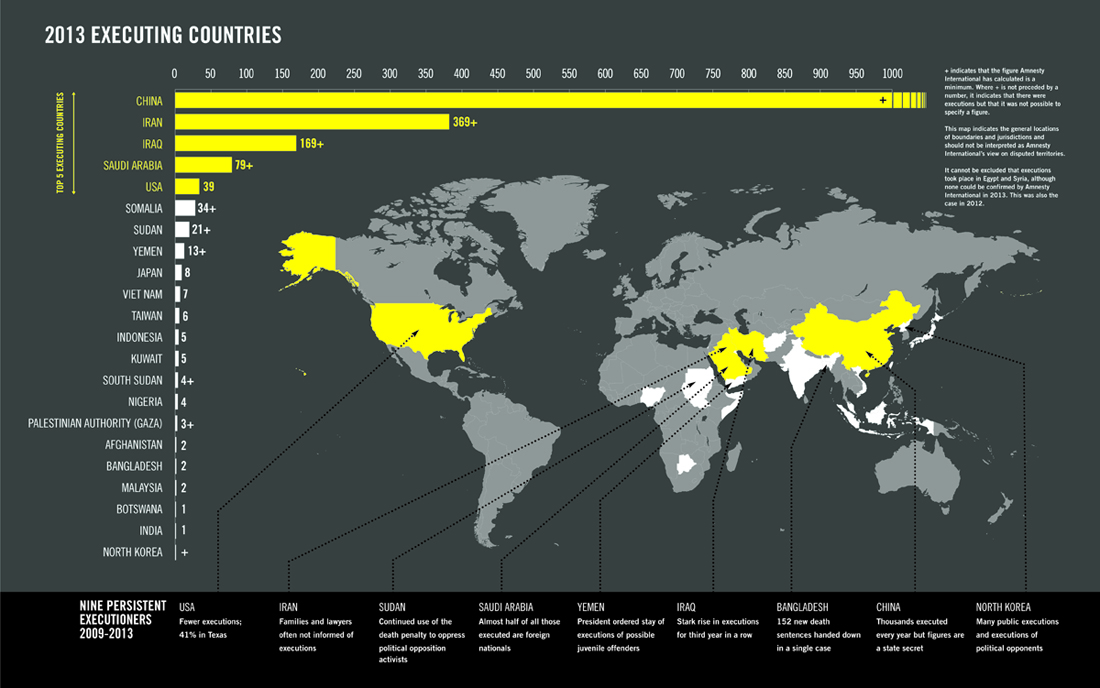 According to Amnesty International’s newly released death sentences and executions report, China has “executed more people than the rest of the world put together in 2013.” The exact number of deaths by execution is, however, uncertain due to the lack of transparency with respect to China’s death penalty system and the shortage of reliable relevant data. The Washington Post reports:

The number of executions worldwide rose 15 percent in 2013, according to an Amnesty International report, with the United States up with Iran, Iraq and Saudi Arabia as the countries executing the most people.

But one country stood out from the rest. In fact, Amnesty argued, China appeared to have executed more people than the rest of the world put together in 2013.

[…] When you look at the graphic above, however, you probably notice that the end of the chart for China fades out. That’s because Amnesty hasn’t been able to fully estimate the true number of executions in China.

[…] The problem is that China treats the number of executions like a state secret, so observers are forced to use media reports and other means in an attempt to come up with accurate figures. Other groups have attempted to estimate the number of Chinese executions and have come to some extremely high numbers: The Dui Hua Foundation estimated that 4,000 were executed during 2011, for example. [Source]

Salil Shetty, the secretary general of Amnesty International, urges China and other countries that use the death penalty to reform their ways. From CNN:

Excluding China, almost four-fifths of all executions worldwide took place in just three countries – Iran, Iraq and Saudi Arabia. In sub-Saharan Africa, Nigeria, Somalia and Sudan were behind more than 90 per cent of all reported executions in that region. In the Americas, the United States still finds itself in the shameful position of being the only country to use the judicial system to kill people. In 2013, the state of Texas alone accounted for 41 percent of all U.S. executions.

[…] To those governments that still execute, our message is clear – you are on the wrong side of history, Whatever the argument is, the death penalty is never the answer. We urge authorities in Iran, Iraq, Saudi Arabia, China, the United States and the rest of the world to take this message to heart, and give us better news to report next year. [Source]

In response to Amnesty’s report, China’s Foreign Ministry spokesperson Hong Lei dismissed the study and defended China’s use of the death penalty. From China Spectator:

“The relevant organisation always has biased opinions against China,” he said at a regular press briefing.

“Whether or not a country retains the death penalty is mainly based on the traditional culture and specific national conditions.

“It meets the aspirations of the Chinese public and will also help crack down on and prevent severe criminal activities,” he said, adding that the practice also followed the country’s “legal and cultural traditions”.