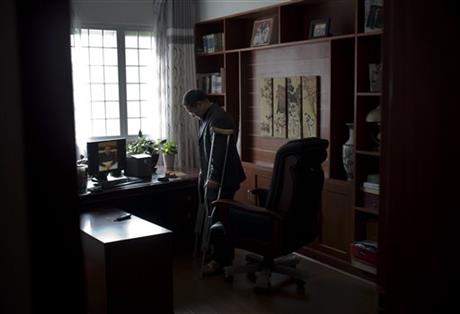 The anti-corruption crackdown launched by President Xi Jinping’s administration has netted officials at most levels of government, many of whom have been investigated and questioned under an internal disciplinary process called shuanggui. While reports have come to light in the past about mistreatment and harsh conditions in shuanggui facilities, Gillian Wong at the AP now gives detailed account of torture from four local officials held in Hunan:

Zhou, land bureau director for the city of Liling, was confined in the party’s secret detention system at a compound in central Hunan, touted as a model center for anti-corruption efforts. Nobody on the outside could help him, because nobody knew where he was.

In a rare act of public defiance, Zhou and three other party members in Hunan described to The Associated Press the months of abuse they endured less than two years ago, in separate cases, while in detention. Zhou said he was deprived of sleep and food, nearly drowned, whipped with wires and forced to eat excrement. The others reported being turned into human punching bags, strung up by the wrists from high windows, or dragged along the floor, face down, by their feet.

All said they talked to the AP despite the risk of retaliation because they were victims of political vendettas and wanted to expose what had happened. Party representatives contacted by the AP denied the abuses had taken place.

[…] Wang Qiuping, party secretary of an industrial park in Ningyuan, said he was slapped often and forced to stand and kneel for hours during a detention of 313 days. His deputy Xiao Yifei told the AP he was hooded for more than a month and beaten up by an interrogator who went by the nickname “Tang the Butcher.” Xiao provided the AP with a receipt from a local party discipline office showing his sister paid 35,000 yuan, or $5,700, in “violation fees” to secure his release after 208 days. And Fan Qiqing, a contractor, said he was kicked and lashed with a metal whip and wooden plank during his 431-day detention and forced to take hallucinogenic drugs.

A Ningyuan party official who refused to give his name said the investigation involving all three men was carried out in a “civilized manner” and no one was tortured.

In April, a suspect died during a shuanggui investigation. Read more about the anti-corruption drive and about shuanggui, via CDT.