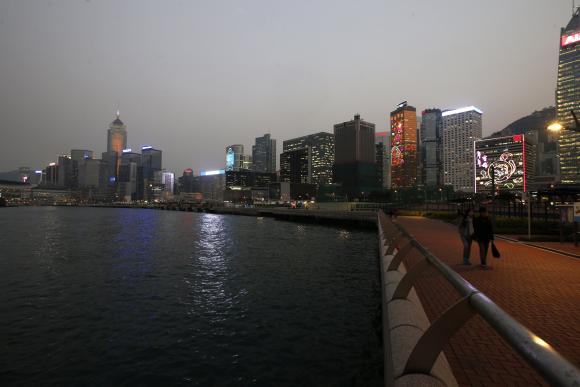 According to a delegate who attended a “closed-door meeting” last Thursday, Zhang Dejiang, head of the National People’s Congress, has warned that “importing western-style democracy for a planned direct election in Hong Kong in 2017 could lead to ‘disastrous’ results.”  From James Pomfret at Reuters:

China has agreed to let Hong Kong elect its next leader in 2017 in what will be the most far-reaching version of democracy on Chinese soil. Specific arrangements, however, have yet to be decided including, crucially, whether public nominations of candidates including opposition democrats will be allowed.

[…] Other delegates in the meeting said Zhang had re-emphasized three key criteria for the poll, including that candidates must “love” China and abide by the city’s mini-constitution that states all candidates must be approved by a “broadly representative nominating committee” that would more than likely be dominated by pro-Beijing loyalists. [Source]

The Economist notes that while Hong Kong’s Basic Law grants a nominating committee the right to elect candidates, pro-democrats predict that the process will likely be rigged:

Electoral reform, however, may not be as radical as that sounds. The Basic Law also stipulated that candidates will be nominated by “a broadly representative nominating committee”. Pro-democrats fear, with good reason, that any such body will simply replicate the rigged election committee, and that Hong Kong’s voters will be presented with a choice between a handful of candidates acceptable to China. If so, 2017 would not be very different from 2012, when Mr Leung, who was probably China’s second choice, won after the favoured candidate proved utterly hapless. The terms of the debate as set by China seem to portend endless wrangling over how the nominating committee might be expanded and become a bit more representative.

An alliance of pro-democracy parties wants to dodge this by adding new methods of nomination—by political parties and by the general public. The government and Chinese spokesmen insist this is just not on, since it would contravene the Basic Law. It is not only the “pro-democracy” camp that is gloomy. In an article this week to mark the halfway point of a five-month government consultation exercise on the election, the head of the civil service, Carrie Lam Cheng Yuet-ngor, wrote that the chances of “the successful implementation of universal suffrage” were “not very bright, though the prospect is not yet completely bleak.” It looks doubtful whether any compromise is possible that could win the two-thirds vote it would need in the Legislative Council, where pro-democracy politicians hold 27 out of 70 seats. [Source]

On Wednesday, Li omitted the phrases “Hong Kong people ruling Hong Kong” and “high degree of autonomy” from his work report. His predecessor Wen Jiabao had included the phrases in all his 10 reports.

But observers see a deeper significance behind the omissions, particularly in view of Zhang Dejiang’s remark and what some see as a tightening of Beijing’s hold on Hong Kong’s government amid governance problems, heated debates over universal suffrage, anti-mainlander protests and nostalgia for British colonialism. [Source]