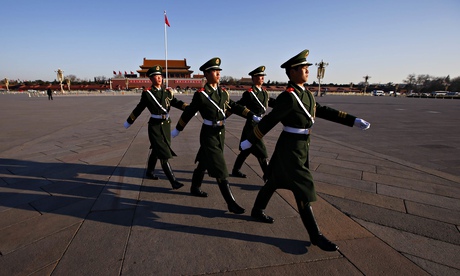 The Guardian reports that four have been detained, including human rights website Tianwang founder Huang Qi,  after reporting a fire believed to be a self-immolation in Tiananmen Square and the defacement of the Mao portrait that faces the square from the north. The fire occurred on March 5, opening day of the National People’s Congress, and the defacement the following day. The NPC is held in the Great Hall of the People, which flanks the western edge of Tiananmen Square.

“Seven police officers came directly to our home, some of them Beijing police,” [Huang Qi’s mother] Pu said. “They said they wanted to understand a situation,” without giving further details. The officers confiscated Huang’s computer, mobile phone and USB thumb drives, she said. Huang is being held incommunicado at a local police station.

Police detained the Tianwang volunteer Wang Jing on Friday and sent her back to her home province Jilin, where she remains in criminal detention on charges of “provoking and stirring trouble”, the website reported. They arrested two more volunteers, Liu Xuehong and Xing Jian, 17, on Saturday morning.

Wang reported the apparent self-immolation attempt on 5 March, the first day of the National People’s Congress, an important political conclave in Beijing that ended on Thursday. Pictures posted online show smoke clouds rising from a distant spot near the Forbidden City, which abuts the enormous flagstone square. Little else is known about the incident.

[…] One day later, Xing reported that a 30-year-old man had vandalised the giant portrait of Mao Zedong that overlooks the square by pouring ink on its lower left-hand corner. Police quickly whisked the man away and blocked off a 200-metre area around the site. [Source]

The New York Times coverage of Huang Qi’s detention provides background on the human rights advocate, and notes that his assistant expressed confusion as to the reason for Huang’s detention:

Starting in the 2000s, Mr. Huang served two prison terms totaling eight years. Human-rights advocates say Mr. Huang has been a victim of political persecution. In 2009, Mr. Huang was sentenced to three years in prison for illegally possessing state secrets in connection with a campaign he had started to help parents whose children were killed when schools collapsed in the 2008 Sichuan earthquake. The Chinese government worked hard to quash any independent investigations into the school collapses.

[Assistant] Mr. Pu [Fei] said he had “no idea” why Mr. Huang was taken away on Thursday. “The situation is very complicated,” he said.[Source]

Tianwang’s Pu Fei tweeted that police have allowed Huang Qi to return home for rest after discovering his body swollen, but that his cellphone and computer remain in confiscation (h/t @hrichina).

On March 11—six days after the alleged self-immolation—the China Police Daily vaguely reported on the an “emergency incident” and the accolades two officers received for dealing with it. From the Global Times:

Zhang Xin, a police officer from Beijing Police’s rail construction branch, and Wang Xiangjiang, an officer from the patrol force at the Tiananmen Square, received awards from Fu Zhenghua, vice-minister of public security, for their successful handling of the incident.

The newspaper did not provide any details of the incident.. [Source]