Fire and Frugality as NPC Opens 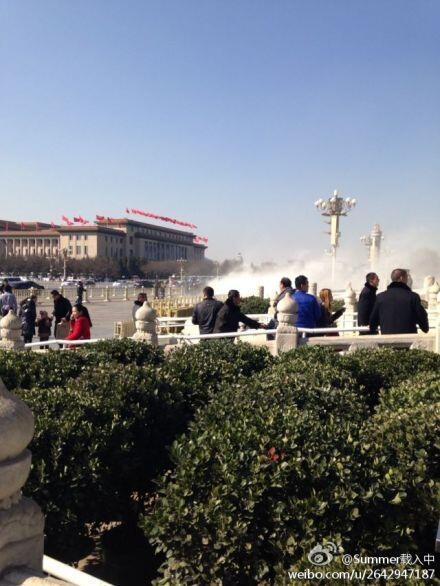 As the annual National People’s Congress session kicked off at the Great Hall of the People on Tuesday, a fire broke out outside, reportedly from a self-immolation, according to witnesses who spoke to journalists. Few details are known about the identity, motivations or current whereabouts of the person involved. Patrick Boehler at the South China Morning Post reports:

Five eyewitnesses close to the scene told the South China Morning Post how a commotion erupted near Tiananmen Gate, the main entrance to the Forbidden City, at around 11am.

Shortly afterwards smoke could be seen rising from the square.

“I had a glance that four, five men trying to put out a fire,” said a woman from Jilin province at the scene. “It all happened so quickly.”

“I heard it was a woman around 40 who burned herself,” she said. “She was alive when they took her away.” [Source]

Report of a woman setting herself on fire in Tian'anmen while NPC kicked off steps away: http://t.co/DfcrMpiKnE … pic.twitter.com/IcdGIMhInr

A SWAT team inspect the ground on Tiananmen Square in Beijing after the flag-raising ceremony took… http://t.co/AjV6HKQ5pU

Unidentified protesters on Tiananmen Square were also taken away by police:

Protesters throw leaflets on Tiananmen, are dragged instantly at flag raising ahead of Parliament opening pic.twitter.com/9bVdF8OF6q

Meanwhile, inside the hall, Premier Li Keqiang delivered the annual work report, in which he vowed to fight pollution, maintain a steady economic growth rate, bolster defense spending, and “carry out people-centered urbanization.” China Real Time has posted full copies of all government reports presented at the meetings in both English and Chinese.

Read more about what to expect at this year’s NPC, via Wall Street Journal’s China Real Time blog. Bloomberg reports that delegates to the meetings will be enjoying fewer of the traditional perks and indulgences this year as part of the government’s austerity campaign. CPPCC delegate Li Xiaolin, CEO of China Power International Development Ltd. and daughter of former premier Li Peng, reportedly carried a cloth bag this year, in contrast to 2012’s US$2000 Pucci suit.