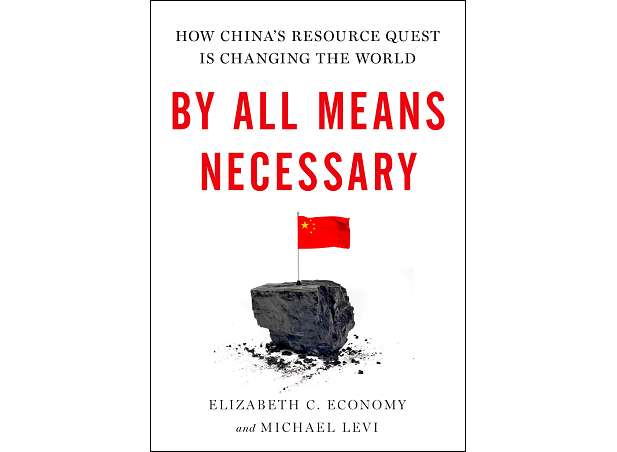 Micah Zenko interviews Elizabeth Economy and Michael Levi about their new book By All Means Necessary: How China’s Resource Quest is Changing the World.  From The Council on Foreign Relations blog on Politics, Power, and Preventative Action:

1. Does China have a clearly identifiable, achievable resource strategy?

Michael Levi: The Chinese government has a series of resource-related strategies. It has long had a goal of increasing Chinese firms’ overseas investments in critical resources, and Beijing has put in place a series of tools to help them be more effective in doing that. China has a goal of increasing the efficiency with which it uses resources and it has a set of strategies, or tools, for trying to accomplish that. In individual diplomatic engagements, China often factors its resource needs into its diplomacy. And when its military thinks about its various priorities it thinks about protection of and risks to the secure flow of resources from overseas back into China. But that leaves two big questions. One: is all of this coherently brought together? I’m skeptical. Two: how often do China’s capabilities match its intentions? That varies enormously.

[…] 5. What is the biggest misperception that you hear, even from informed audiences, about your book and how would you correct that?

Economy: For me, the greatest misperception is that China is the “cookie monster” of the resource world, that somehow it is going out and gobbling up resources all over the world. In fact, we found that China is the fourth-largest investor in Africa, the third-largest investor in South East Asia, third-largest investor in Latin America, and the third-largest investor in land overseas. In many respects, its ability to coordinate an effective and diplomatic resource strategy is much less than what we typically believe—Chinese companies and firms are far more independent actors than we think, sometimes electing not to participate in what Beijing wants to do in terms of a big overarching package of investment, trade and aid, and sometimes going out by themselves and causing all sorts of problems for Beijing. It’s a much less coordinated and cohesive resource strategy, and, in some ways, less successful strategy than I think I, maybe we, anticipated.

Levi: A myth is that Chinese leaders get what they want. We have a habit, that isn’t restricted to this particular discussion, of hearing scary-sounding goals or pronouncements and assuming that is how reality will turn out, which leads us to often overreact or react in the wrong ways. What Chinese leaders want is not necessarily what they get, in part because of what Liz said. They often have less capacity to command outcomes than they might hope or that someone who reads the “China for a Day” chapter in Tom Friedman’s book, Hot Flat and Crowded, might conclude. Also, as big as China is, the global economy and the global security system are all also pretty big things and pretty resilient systems. Fifteen years ago Chinese leaders were skeptical of markets and thought they might move to a way of securing oil that didn’t rely as much on markets. However, the market has been a pretty remarkable and resilient institution itself. You can see examples like this over and over. The countries, market players, and institutions around the world, exert extraordinarily powerful forces on China even as China is influencing the rest of the world. As a result you see China changing in some ways as much through its own resource quest as it is changing the world itself. [Source]

Watch an interview with Levi and Economy which addresses whether China is “taking lessons from abroad.” From The Carnegie Council for Ethics in International Affairs:

See also a review of the book by Howard French at The Wall Street Journal.

Nickname of the Week: Big Spender

One Belt, One Road, One Global PR Blitz