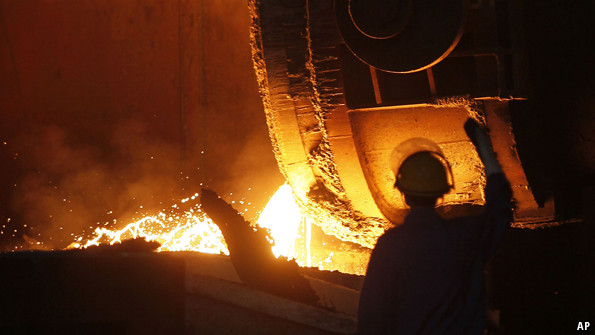 The Economist explains why smuggling iron ore to China has become a popular activity for Mexican drug traffickers:

IT IS big, bulky, you can’t snort it, and it doesn’t get you high. Per tonne, it sells for about $125, compared with cocaine, which fetches at least $50m wholesale. By any reckoning, iron ore would seem like a daft thing to peddle if you were in the drugs trade. Yet on March 3rd Mexican authorities seized nearly 120,000 tonnes of it near the port of Lázaro Cárdenas on the Pacific coast. Much of it they reckon was due to be smuggled to China by the Knights Templar, a bloodthirsty drug-trafficking outfit. Officials say that the business had become even better for the Templars than drugs.

How can there be so much money in selling such a dull commodity—even to the Chinese, who seem to be addicted to the stuff? The simplest answer is that this is no ordinary business. For years, Michoacán, the state where Lázaro Cárdenas is located, has been lawless. Even though the port is the biggest on Mexico’s Pacific coast, the area surrounding it has been a battleground for drug gangs fighting over its strategic location. The Templars, who in recent years won the turf battle, took advantage of the fact that Michoacán is Mexico’s biggest producer of iron ore. Officials say they muscled in and forced the local mine bosses, some of whom are Chinese, to pay from $4 to $7 per tonne of mineral extracted. By some accounts, they also sent shipments of iron ore and other minerals to China themselves, including gold, which was hidden in containers. In return, the Chinese have sent chemical precursors for making synthetic drugs. With iron ore shipments from Lázaro Cárdenas rising to 4m tonnes last year from 1.5m previously, the bonanza was reckoned to be worth many millions of dollars.

But the main reason it started to predominate was because smuggling drugs is more complicated than it looks. […] [Source]

Read more about why China imports so much iron ore, via CDT.