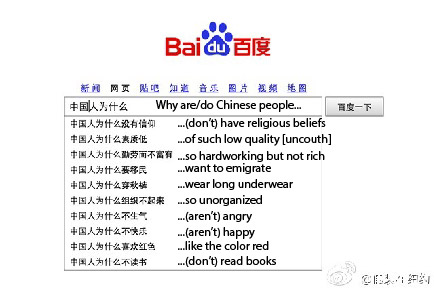 […] As I played around with the tool this week, a portrait of the average Baidu user started to emerge: a broke, sexually frustrated guy/girl who wants to become a teacher, buy a car, marry, and have a son (or, better yet, twins), if only he/she can get this damned wifi router to work.

Indeed, China has many problems, but the biggest headache plaguing Baidu users seems to be how to get wireless. Type in “怎么,” or “how,” and four of the top ten suggestions involve the setting up of routers and cracking of passwords. (For simplicity, the searches below are all translated from Mandarin.) Rivaling wifi for subject of greatest concern is pregnancy. “How do I make sure I have a son?” users ask, reflecting a common desire in China, especially under the government’s one-child policy. Women also want to know how to “get pregnant quickly” and have “dragon-phoenix twins,” or twins of opposite genders. Otherwise, users are most concerned with how to “buy stocks,” “apply eye-liner,” “download videos,” “reduce belly fat,” “repair a kidney,” and “catch pheasants,” slang for soliciting prostitutes. […] [Source]

In the spirit of The Atlantic’s sociologically insightful map of the United States published in January and sourced from Google’s autocomplete, Tea Leaf Nation published their own map of China last week. With each province or autonomous region labeled with the most common questions beginning “why is [insert region here]…,” the map reveals common regional stereotypes in China:

Why is the northwestern Chinese region of Xinjiang “so chaotic?” Why are many from the southern metropolis of Shanghai “unfit to lead”? And do people from central Henan Province really steal manhole covers? These are just some of the questions — ranging from the provocative, to the offensive, to the downright ridiculous — that Chinese people ask about themselves and each other on Baidu, the country’s top search engine, which says it processes about 5 billion queries each day.

In the West, amateur sociologists use Google’s voluminous search history to finish half-written questions about different regions. They then plot the stereotypes onto maps such as this one of the United States, which The Atlantic called “The U.S. According to Autocomplete.” China, with its long history of regional stereotyping, is ripe for similar treatment. After all, it is home to 22 provinces, five autonomous regions, four municipalities, as well as Taiwan, what some there would call a renegade province, pictured above because of its prevalence on Baidu. Held together by a common history and culture (and occasionally force), the regions are divided by real and perceived differences in wealth, environment, stability, ethnicity, and personality — not to mention variations in that history and culture. […] [Source]

Click through to see Tea Lea Nation’s map and read the analysis.

Weibo user 假装在纽约 allowed Baidu to finish questions beginning “why are people from [insert region]…” [［XX］人为什么…], providing a glimpse of the stereotypes attributed to individuals from different regions in China. CDT has translated 假装在纽约’s findings and his weibo conclusion:

@假装在纽约：Why is it that our understanding of each other and our world is so simple, so direct, so coarse and so full of prejudice? 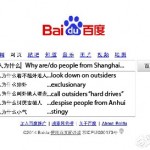 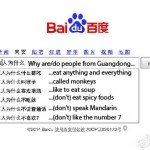 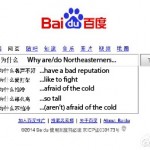 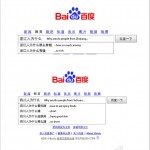 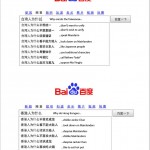 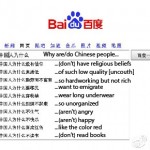 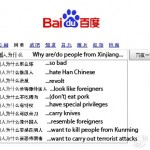 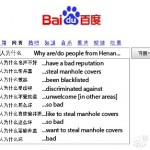 Just as Tea Leaf Nation noted a lack of suggestions when beginning a question about “Tibet,” Baidu also fails to autocomplete a query about