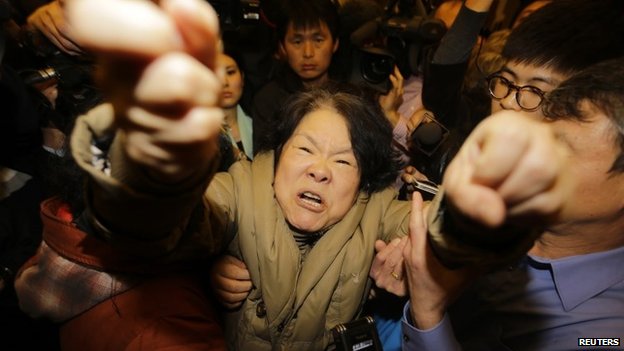 At the BBC, Celia Hatton asks whether those protesting the Malaysian government’s handling of the investigation into missing flight MH370 may have endangered themselves by also criticizing Chinese authorities:

If anger continues to build against the Chinese leadership, the families could be entering very dangerous territory.

In the past, the Communist authorities tolerated mild protests by groups who had been publicly wronged, including parents whose children were sickened by tainted milk formula or families who lost children when their schools collapsed during the 2008 Sichuan earthquake.

However, in both of those instances, Beijing’s patience for those groups quickly ended once the families organised and began issuing demands.

Chinese police are now preventing journalists from meeting family members inside the Beijing hotel where the relatives receive their daily briefings – an ominous sign that the government will not accept any more public protests. [Source]

Heather Timmons at Quartz reports that the MH370 incident may be a setback to what Xi Jinping described six months ago as a “‘new era’ in Sino-Malaysian relations”:

Less than six months ago, Chinese president Xi Jinping made his first-ever visit to Malaysia to usher in what China’s state media dubbed a “new era” in Sino-Malaysian relations, as the two-countries agreed to increase trade and cooperate on everything from agriculture to energy. “It’s a miracle that so many achievements have been made within such a short period of time,” Tan Khai Hee, secretary general of Malaysia-China Friendship Association, told Xinhua after the October visit.

The short-lived new era between the long-time allies ended abruptly this month, with the disappearance of Malaysian Airlines flight 370.

Chinese officials and citizens alike are furious with the Malaysian government over what they see as ineptness and incomplete disclosure over the fate of the Beijing-bound plane that had 154 Chinese citizens aboard. Malaysian prime minister Najib Razak finally confirmed late March on 24th that MH370 ”ended in the Indian Ocean.” […] [Source]

Bruce Einhorn at Bloomberg Businessweek emphasizes that China will also suffer if relations with Malaysia deteriorate:

The reaction in the Chinese media and in cyberspace will no doubt hurt the Malaysian tourist industry, which has been seeking to attract a growing number of big-spending travelers from China. (In another example of unfortunate timing, 2014 not only is supposed to be “China-Malaysia Friendship Year,” it is also supposed to be “Visit Malaysia Year.”)

But China has something to lose, too. An ongoing squabble with Malaysia would set back China’s efforts to expand its influence in Southeast Asia. Like other Asian nations, including Japan, Vietnam, and the Philippines, Malaysia has claims to islands that China says are Chinese territory, but until now the Chinese leadership has tried to avoid straining its Southeast Asian ties and focused instead on disputes with the Philippines and Japan .

[…]Any freeze in Sino-Malaysian ties could open a door to China’s major rival, Japan. Prime Minister Shinzo Abe spent much of his first year in office courting leaders in Southeast Asia, traveling to Malaysia and all the other ASEAN countries. Notably, the Japanese government is now taking a much more conciliatory position toward Malaysia’s handling of the Flight 370 crisis. “The Malaysian Government has been cooperating with us, giving us quite a good amount of information, very timely and swiftly,” Mako Miyagawa, Japan’s ambassador-designate to Malaysia, told reporters on Tuesday, according to Malaysia’s the Star newspaper. Bernama, the official Malaysian news agency, quoted him further as saying “we really understand how difficult it has been for the Malaysian authorities to handle this case.” [Source]

The International Business Times reports on Southeast Asian anxiety that “China may be exploiting the disaster… to solidify its presence” in the disputed waters of the South China Sea.

The tragic crash of Malaysian Airlines Flight 370 appears to have reinforced regional tensions in the South China Sea, where China and several Southeast Asian nations have long sparred over competing territorial claims.

From the Philippines to Vietnam, officials are growing anxious that China may be exploiting the disaster as an opportunity to solidify its presence on the waters, using the search for the wreckage as pretext to stick around in contested waters.

“I don’t think any ships that China has deployed in the South China Sea, ostensibly in the name of the search, are going home any time soon,” said Ray Kwong, a senior adviser to the US-China Institute at the University of Southern California, in an email to International Business Times. [Source]