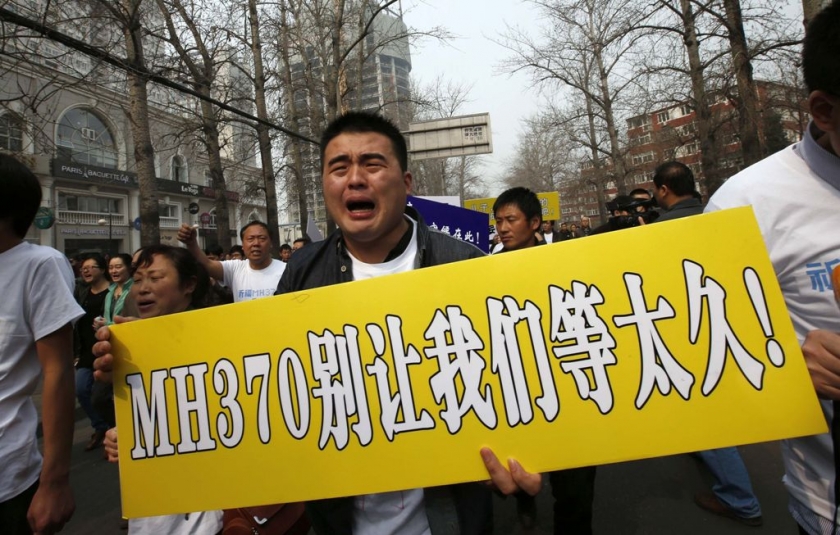 Following an announcement from Malaysian Prime Minister Najib Razak that “Flight MH370 ended in the southern Indian Ocean” and that there was no hope of any survivors, families of passengers took to the streets to protests Malaysia’s handling of the investigation into the flight’s disappearance. After gathering at the Lido Hotel, where they have been receiving briefings on the search, family members marched to the Malaysian Embassy in Beijing. The Chinese government also called on the Malaysian government to show them the evidence of the plane’s final location, which has not yet been released to the public. From Reuters:

Early on Tuesday, just hours after Malaysian Prime Minister Najib Razak said the plane had crashed in the Indian Ocean, an unidentified family member read out a statement at the Beijing hotel where many of the relatives of those on board were staying, denouncing the airline, the Malaysian government and military for “constantly trying to delay, hide and cover up the truth”.

In a later statement, the families said they would head to the Malaysian Embassy in Beijing to “protest, seek the truth and the return of their family members”.

The families, in a statement, said they would “take all possible means” to pursue the “unforgivable guilt” of the airline, the Malaysian government and the military. [Source]

Journalists and others in Beijing live-tweeted the protests and a press conference by Malaysia Airlines:

#Flight370: Malaysian Airlines official said at press conference that US$5000 financial assistance has been prepared for each family member

#Flight370: Relatives have arrived outside of the Malaysian Embassy.(photo) pic.twitter.com/CZrH6DvUny

These chaps have just turned up – embassy guards? pic.twitter.com/VkcMThkSxu

Some #MH370 relatives now in media throng. Police pulling some cameramen away. Now a stretcher with woman being wheeled past.

Another young man makes a run at the embassy gate. Plain clothes police telling riot police and paramilitary not to use force. #MH370

Hundreds of police in front of Malay embassy in Beijing. More coming. Ambulances. One more small group of relatives just let through.

#MH370 families chanting for Malaysian diplomats to come out and face them. More police heading to area cordoned off for protest.

Unlike gov't-sponsored protests at Japanese embassy, this one by relatives of MH370 fueled by genuine personal loss – could get ugly

A protester wearing a 'Pray for MH370' t-shirt said the Malaysian ambassador did not come out to talk with families. They all left on buses.