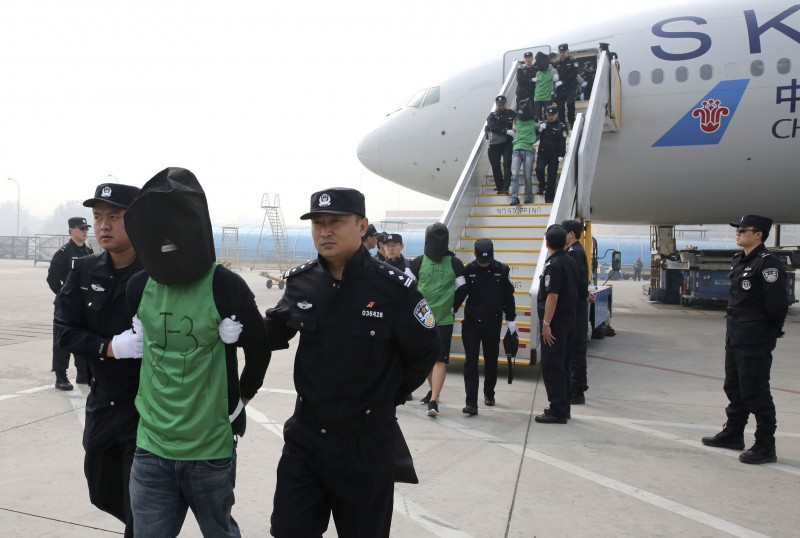 This week, 45 Taiwanese citizens were deported from Kenya to China after several were acquitted on charges of telecoms fraud by a Kenyan court. Beijing praised the Kenyan government for respecting the One-China policy, but Taipei accused it of violating international law to curry favor with China. Now, Chinese state television has aired the confessions of two suspects believed to be Taiwanese citizens. Reuters’ Michael Martina, Natalie Thomas, Faith Hung, and Ben Blanchard report:

“I now know that carrying out these scams is wrong, and I will accept the punishment of the law,” said one suspect surnamed Jian. “I hope that the government will give me a chance.”

Asked by a woman off-camera what he wanted to say to his “mainland compatriots”, Jian, who had a Taiwanese accent, said: “Sorry to the people of the mainland”.

[…] China’s Ministry of Public Security has said the group detained in Kenya had operated out of Nairobi and were suspected of cheating people out of millions of yuan across nine provinces and cities in China. As most of the victims were in China, it said, they would be prosecuted there. [Source]

The confessions are the latest in a trend of state televised admissions of guilt—some of which may have been obtained by coercion—that critics argue compromise the rights of suspects.

The Hong Kong Free Press’ Kris Cheng reports on the lack of confirmation that the two suspects were indeed part of the group recently deported from Kenya, and provides more information on the scam as presented by state media:

Xinhua was able to “interview” two of the suspects on Thursday, with approval from the authorities. It was not possible to confirm that they were indeed the suspects deported by Kenya, as Chinese and Taiwanese authorities and Xinhua have not revealed any identities.

The two suspects, surnamed Hsu and Jian, said they were introduced to a phone scam ring in Kenya in July and October 2014, respectively.

They told Xinhua that there were three levels of operatives in the ring. People on the first level were those who called people on the mainland and pretended to be medical insurance company staff to obtain information from them.

Jian, who claimed to be a second level operative, said he would pretend to be a Beijing police officer and tell victims their personal information had been stolen and they were suspected of involvement in money laundering. They would request victims to provide more information, such as names, family situations, occupations, incomes, and bank accounts.

The forced deportations from Kenya come as Beijing grows increasingly assertive in returning overseas critics—some of them with official refugee status abroad—to China. In the wake of the latest incident, Global Voices’ Oiwan Lam translates commentary from Taiwanese web users expressing concern at China’s willingness to detain their compatriots overseas.

Beijing has also sought Taiwanese suspects in a similar scam be returned to China from Malaysia and Indonesia; Indonesia has pledged not to send the 31 Taiwanese arrested there to China, and on the urging of Taipei, Malaysia has made a similar pledge. The AP’s Eileen Ng reports:

Taiwan on Friday persuaded Malaysia to hand over 20 Taiwanese criminal suspects rather than deport them to China, amid an ongoing battle over jurisdiction involving the self-ruled island. […]

A Taiwanese Foreign Ministry statement said the 20 suspects, who were detained on suspicion of committing wire fraud, had boarded a plane bound for Taiwan on Friday. Malaysian officials had delayed the flight, saying they were awaiting legal approval, but the Taiwanese foreign ministry said the plane was allowed to take off 5:45 p.m. local time.

Taiwan’s statement Friday evening said its officials were actively engaged in talks to pressure Malaysia to allow another remaining 32 suspects to be deported to Taiwan for investigation.

Malaysian officials, speaking anonymously because they weren’t authorized to talk to media, confirmed that Chinese officials had requested the suspects be sent to China. The officials said the case was still under discussion but were unable to give further details. [Source]

Experts in both China and Taiwan say that Beijing did not violate international law in asking for the suspects’ return to China, but others have warned that the move could serve to further alienate the people of Taiwan amid mounting cross-strait political tension. Pro-independence Democratic Progressive Party (DPP) candidate Tsai Ing-wen won a landslide victory in Taiwan’s executive elections in January, and ahead of her inauguration next month Beijing is watching for any assertion of independence by the self-governing island nation. At the South China Morning Post, Shi Jiangtao reports on Taiwanese official’s claims that Beijing has violated a cross-strait agreement on international crime suspects, and on analyst’s suspicion that the successful and attempted deportations were part of a diplomatic offense against Taiwan following the DPP victory:

In a strongly worded statement, Taiwanese legislators from across the political spectrum accused Beijing of deliberately ignoring a tacit 2011 agreement on dealing with crimes committed by Taiwanese or mainlanders in a third country and severely undermining cross-strait ties.

“Such violent actions only create negative perceptions among the Taiwanese public,” the statement said.

[…] Li Fei, deputy director of Xiamen University’s Taiwan Research Institute, said the dispute over deportation cases was another warning shot from Beijing against Tsai following her crushing victory over the mainland-friendly Kuomintang administration this year. [Source]