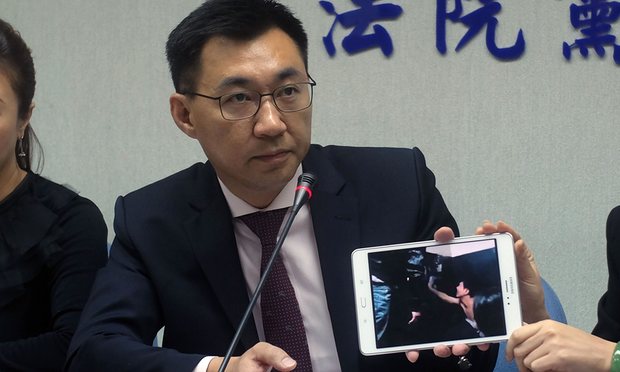 Early this week, news broke of eight Taiwanese nationals being flown from Kenya to mainland China last Friday, reportedly due to pressure from Beijing. The eight were among 77 ethnic Chinese arrested in November 2014 for illegally entering Kenya to engage in cybercrime; all eight were also among a group of 37 acquitted on all charges by a Kenyan court last week. As Taiwan’s foreign ministry protests what Taipei sees as Beijing’s “abduction” of Taiwanese citizens, the AFP reports that 37 more Taiwanese are soon to be deported to China:

Taiwan said Kenyan police broke down a jail wall and used tear gas Tuesday to force a second group of Taiwanese to board a plane for China, a day after accusing Beijing of “abducting” eight other citizens.

The 15 Taiwanese were being held in a police station despite being cleared by a Kenyan court of involvement in a cyber scam, the foreign ministry said.

[…] Three people from China’s Kenyan embassy were present, he said. Taiwan itself has no diplomatic ties with Kenya and its nearest diplomat is based in the South African capital.

There was no immediate confirmation the 15 had left for China.

[…] Another 22 Taiwanese arrested just last week over similar allegations were also expected to be sent to China Tuesday, it said.

Mainland authorities have not confirmed details of the deportations and Taipei is still seeking a response. […] [Source]

The New York Times’ Jeffrey Gettleman and Austin Ramzy note that this is not the first time an African government has controversially attempted to curry favor with Beijing:

This would not be the first time an African nation did something contentious to please China, the new heavyweight on the continent. Zambia, South Africa and others have bent over backward — often provoking the ire of their own people — to keep China happy.

Analysts say that for authoritarian governments, which is the case for many in Africa, Chinese support is like a dream. China drops billions of dollars on splashy infrastructure projects all across Africa without pressuring governments to improve democracy or human rights, like Western nations often do.

In recent years, Chinese workers and Chinese money have transformed Kenya, building thundering new highways, bridges, malls, a flagship airport and a railroad; the Chinese are even helping on secretive national security matters, like installing electronic eavesdropping equipment for the Kenyans.

According to Taiwanese officials, Chinese pressure explains why the Kenyan government deported several dozen Taiwanese nationals to mainland China in recent days, even though Taiwan considers itself politically separate from mainland China. [Source]

Reuters’ Ben Blanchard reports on Beijing’s plans to prosecute the Taiwanese for fraud, and on Taipei’s fears that they will not face a fair trial in China:

Taiwanese had been heavily involved in telecoms fraud in China and had caused huge losses, with some victims killing themselves, the ministry said.

Taiwanese criminals “have been falsely presenting themselves as law enforcement officers to extort money from people on the Chinese mainland through telephone calls”, the ministry added.

The group detained in Kenya had operated out of Nairobi and were suspected of cheating people out of millions of yuan across nine provinces and cities in China, and as most the victims were in China, they would be prosecuted there, it said.

[…] “The Chinese judicial system is in question for many people in Taiwan,” said Lo Chih-cheng, a lawmaker for the ruling pro-independence Democratic Progressive Party. “They are wondering if those people can get a fair trial in China.” [Source]

The AP’s Christopher Bodeen relays legal experts’ concerns that Beijing’s claims to jurisdiction over the 45 Taiwanese may not be valid, and reports analysts’ opinion that this could be part of a plan to draw concessions from newly-elected Taiwanese president Tsai Ing-wen:

[…L]egal experts say Chinese law is not quite so explicit and the case’s handling appears to be based mainly on the “one-China principle” that insists Taiwan be viewed as part of China — and Taiwanese as Chinese for legal purposes.

“I think the Chinese are taking a hard approach to these matters,” said Joseph Cheng, a scholar of Chinese politics formerly at the City University of Hong Kong. “They are saying we can play hard ball and in places like Kenya, we have a lot of influence.”

Analysts say China’s specific goal is to extract concessions from Taiwanese President-elect Tsai Ing-wen, who has refused to endorse Beijing’s position that Taiwan and the mainland are part of a single Chinese nation. The sides split amid civil war in 1949, and China has threatened to use force to gain control over the self-governing island.

Part of Beijing’s approach is to isolate Taiwan internationally, excluding it from global institutions like the United Nations and leaving it with just 22 formal diplomatic allies. Kenya and Taiwan have never had diplomatic relations.

Although Beijing eased the pressure under Taiwan’s China-friendly outgoing president, Ma Ying-jeou, indications are it’s redeploying such tactics to influence Tsai ahead of her May 20 inauguration. [Source]

Following the widespread expression of public dissatisfaction with the ruling Kuomintang’s pro-Beijing policies in the 2014 Sunflower Student Movement, Tsai won a landslide victory in Taiwan’s executive elections in January, and will next month become Taiwan’s first female president. Tsai’s pro-independence Democratic Progressive Party (DPP) also won a majority of seats in the legislature, and Beijing is watching anxiously to see if the new government will adopt symbols of Taiwanese independence. The National Interest’s Aaron Jensen recently reported that mainland political anxiety has been expressed in a series of Beijing-sponsored “mind games,” including the airing of inauthentic military operations in Fujian that a Taiwanese military official warned could be “psychological warfare.”