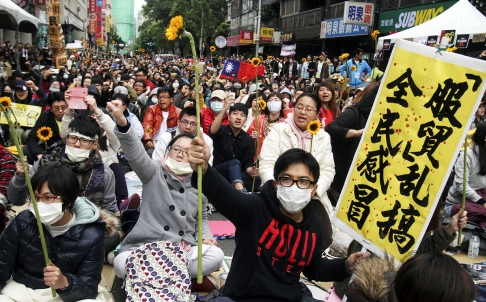 In March of last year, student protesters occupied Taiwan’s Legislative Yuan in opposition of a trade pact with Beijing, stoking what would become known as the “Sunflower Student Movement.” Nine months later, the ruling Kuomintang (KMT/Nationalist) Party suffered major losses in local elections last November, a further indication that the close ties the party had forged with Beijing had fallen out of public favor. As we approach the one-year anniversary of the occupation of the Legislative Yuan, AFP’s Amber Wang reports on the lasting impact that the Sunflower Movement has had on Taiwan’s political landscape:

“The fast-paced exchanges between the two sides [China and Taiwan] in the past seven years have slowed and halted amid concerns over Taiwan’s security, manifested by the movement,” said Tung Chen-yuan, a political analyst at Taiwan’s National Chengchi University.

“The ‘sunflower’ movement was a turning point in the development of cross-Strait ties.”

The movement had also encouraged people to express their wider frustrations with the KMT, said Wang Yeh-lih, a political science professor at the National Taiwan University.

[…] “We think the Ma [Ying-jeou, KMT leader until last year and President of Taiwan until next year’s general election] government is leaning too close to Beijing,” said activist Lai Ping-yu, spokeswoman for Black Island Nation Youth Front, one of the civil groups behind the movement.

[…] “I think young people are no longer indifferent to politics and so many of them came out to vote in the November elections, which affected the outcome, she said. “I think their votes will have some impact next year” [when Ma’s term comes to an end.] [Source]

“It shows the possibility of a third way,” said Joseph Lin, chairman of Taiwan’s Judicial Reform Foundation, which is defending 118 people charged over the protests. [see CDT coverage of the indictments.] “It shakes up the pre-existing relationship between politics and moneyed interests.”

[…] That is where the new parties come in. They aim to disrupt Taiwan’s two-party system, in which the Nationalists and the DPP hold the bulk of the 113 seats in the legislature.

Just five of more than 260 of the island’s political parties figure in parliament. A newly formed Social Democratic Party, led by social activists, plans to set up shop soon.

While last year’s events may have stimulated grassroots politics in Taiwan, Taipei-based journalist and University of Nottingham China Policy Institute’s J. Michael Cole last week noted that Beijing now appears intent on changing the terms of the “1992 Consensus,” whose malleable interpretation has been the mechanism fostering cross-strait relations for decades. From the National Interest:

[…] Given what has been achieved under the Consensus, it would be logical to assume that Beijing would seek its continuation. However, recent comments by Chinese President and CCP Chairman Xi Jinping, as well as articles appearing in official Chinese media, indicate that the Consensus no longer suffices. What Beijing seems to have in mind could have serious ramifications for cross-strait stability and is sure to cause a storm in Taiwan’s political scene, where the framework is already regarded as controversial and unpalatable to the DPP.

Xi now insists that future exchanges will be contingent on the Taiwanese side acceding to the Consensus minus the part about “different interpretations.” In other words, the built-in flexibility that has made the Consensus a success is to be obviated, and the baseline has moved. Beijing’s new position is that there is only “one China,” of which Taiwan and “the Mainland” are indivisible components. By adhering to this new concept, Xi said, political parties in Taiwan should not have any problems dealing with the “Mainland.” (Significantly, many Chinese visitors to Taiwan in recent years have insisted on being called da lu ren—“people from the Mainland”—rather than zhong guo ren, or “Chinese people.”)

This departure from a framework that has arguably served as a “foundation for peace across the Taiwan Strait” underscores Xi’s growing impatience with the slow pace of progress (in Beijing’s view) in resolving the Taiwan “question.” It is also part of a strategy of gradual escalation, one in which the norms, or baselines, are constantly shifting to reflect Beijing’s preferences. […] [Source]

Cole’s argument, backed up by similar statements in the Taiwanese media by some other scholars, sounds convincing but I am inclined to take issue with it. First of all, I cannot see any real change to the ‘1992 consensus’ articulated by the Beijing leadership. Xi Jinping has certainly upped the ante in many policy fields (think of his foreign policy and his campaign-style initiatives in the domestic arena) since he took over the wheel. But his Taiwan policy has so far not left the wording of previous governments going back to the Deng Xiaoping era. What he stressed recently in Beijing was another confirmation that: a) China upholds the ‘1992 consensus’ as the foundation and condition of exchange with Taiwan’s authorities and political parties; b) its essence is to acknowledge that the mainland and Taiwan belong to ‘one China’; c) if this foundation is shattered, mutual trust across the Taiwan Strait becomes impossible and cross-Strait relations must return to a state of instability.

Looking through my files on the ‘1992 consensus’, I cannot find one official Chinese statement that has deviated in substance from this one. China has never officially acknowledged the “two interpretations” part (I am ready to be corrected here by written evidence). Consequently, what Xi has said is no “demolition” of the ‘1992 consensus’ but just a repetition of what has been known for many years. Hence, the DPP’s position vis-à-vis Beijing hasn’t changed either. It will face an arduous task to get into talks with China’s leaders if it doesn’t fall in line with the ‘1992 consensus’, no matter if it allows for different interpretations or not. Xi Jinping reiterated just this, period.

I also think that Cole misreads the current position of the KMT vis-à-vis Beijing and its exposure to Chinese pressure. […] [Source]

Read more about Taiwan and cross-strait relations, via CDT.