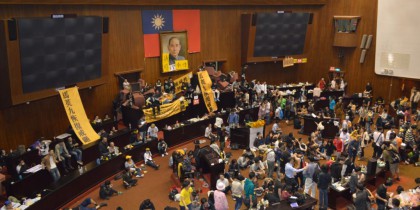 Taiwanese authorities have indicted over 100 people over last year’s protests against a trade deal with China, which focused on a three-week student occupation of the island’s legislative chamber. From Austin Ramzy at The New York Times:

Protest leaders including Huang Kuo-chang, a scholar, and Lin Fei-fan, a former graduate student, were charged Monday with counts related to the 23-day occupation of Taiwan’s legislature, including obstructing official business and inciting others to commit criminal acts.

A total of 118 people face charges, including 93 people for an hourslong effort to expand the protests by taking over Taiwan’s main government administrative building on March 23. The police used clubs and water cannons to clear the demonstrators, the most violent clash of the Sunflower Movement protests, with nearly 200 injured. Four people were charged with surrounding a police station on April 11, when the main body of protesters left the legislature. [Source]

The Taiwanese authorities must drop criminal charges against people solely for participating in or organizing peaceful demonstrations, Amnesty International said, after more than 100 people were charged for protesting during the so-called “Sunflower Movement”.

“While the government has been keen to press charges against the student leaders and citizen activists who took part in the Sunflower Movement, it seems content to let the police and politicians who may have carried out human rights abuses at the Executive Yuan get away without any independent investigation,” said William Nee, Amnesty International Researcher.

[…] “While there were injuries on both sides, Amnesty International believes that at least some of the police use of force on that night was excessive”, said William Nee. [Source]

The University of Nottingham’s China Policy Institute Blog (via CDT) hosted a series of reflections on the Sunflower protests and their aftermath in September, six months after the occupation began.