Where Have the Sunflowers Gone? 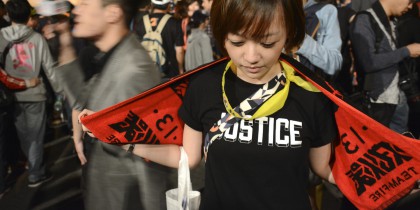 Six months after protesters occupied Taiwan’s legislative yuan, J. Michael Cole kicks off a series of reflections on the Sunflower Movement with an assessment of its past successes and present challenges. The former, he argues, lie in alerting the world to the depth of domestic resistance to Taiwan’s growing economic dependence on China and the influence of Singapore’s “soft authoritarianism.” From the University of Nottingham’s China Policy Institute Blog:

While it has yet to be fully appreciated, that success in signaling growing discontent should serve as a warning to the international community that the Taiwan Strait is not yet, as the Ma administration would want us to believe, an “avenue of peace.” Ultimately, the Sunflowers’ actions is a wake-up call, made all the more resonant given recent developments in Hong Kong, to China hands. Despite the rapprochement that has occurred since 2008, ties between Taiwan and China have only been warmed at the superficial level; the contradictions and incompatibilities remain as deep as they ever were, and are becoming starker as authoritarian China expands the areas in which it can gain control over Taiwanese society. The Sunflower Movement’s greatest achievement was to make it clear that the Taiwan Strait remains a dangerous place, and that the policy of foreign governments pushing Taiwan in a direction it would rather not choose (inevitably closer to China) is a recipe for disaster.

[…] Successes notwithstanding, the Sunflower Movement, or whatever successor movement emerges in its wake, cannot afford to lose its focus. Worryingly, this is exactly what seems to have happened. The movement has splintered and its members are now busy fighting among themselves. […] [Source]

See more on the Sunflower Movement and its links and parallels with Hong Kong, via CDT.