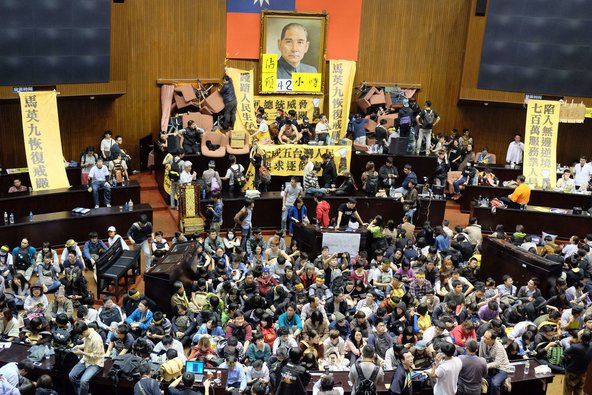 On Tuesday evening, hundreds of students and activists occupied the Legislative Yuan, Taiwan’s unicameral legislative assembly, to voice opposition to a trade pact with Mainland China. Activists have accused President Ma Ying-jeou and his ruling Kuomintang party of pushing the controversial trade agreement through without proper review. From Reuters:

Hundreds of protesters in Taiwan opposed to a trade pact with China which they fear gives the mainland too much economic influence and access to opportunities have occupied Taiwan’s legislature.

The protesters burst into the legislative chamber late on Tuesday and repulsed police efforts to evict them, media said.

The students said they were demanding an apology to the Taiwan people from President Ma Ying-jeou for the trade pact and that an initial review of the pact by the ruling Kuomintang (KMT) party be scrapped.

[…] A political analyst said the protest would not derail the deal.

“I don’t think this is going to threaten the overall passage of the pact, though it may delay it a bit,” said Lu Ya-li, a professor of political science at Taipei’s Chinese Culture University. “But this pact is too important for Taiwan’s economy – it will pass regardless.” [Source]

The New York Times’ Austin Ramzy provides details on the agreement, comments from protestors, and a glimpse into public sentiment about the pact:

The measure, which drops barriers on service trades, is a follow-up accord to the 2010 Economic Cooperation Framework Agreement between Beijing and Taipei. The services agreement has raised concerns in Taiwan that it will harm local businesses.

[…] “If we decide that our future is only in trading with China, then we will just restrict ourselves,” said Huang Pei-hao, 20, a junior at Fo Guang University, who spoke to a group of demonstrators outside the legislature.

[…] Under the agreement the two sides would lower barriers on cross-strait investment in dozens of fields including health care, finance and insurance. The D.P.P. said it would fight approval of the deal, but it lacked the votes to thwart the Kuomintang, which holds 65 of 113 legislative seats, versus 40 for the D.P.P.

An opinion poll released last week by Taiwan Indicators Survey Research found that 44.5 percent of respondents opposed the trade deal, while 32.8 percent supported it and 22.9 percent did not respond. A majority, 73.7 percent, said they endorsed a line-item review of the agreement. [Source]

The Cross-Strait Service Trade Agreement (CSSTA) was signed by semi-official organizations from China and Taiwan in June of 2013, and Taiwan’s legislature agreed to a clause-by-clause review along with 16 public hearings—half overseen by the Kuomintang, the other half by the opposing Democratic Progressive Party. At The Diplomat, J. Michael Cole describes the political situation leading up to the ongoing occupation:

The KMT held its eight hearings within the space of a week, with several members of social groups and NGOs complaining about lack of access. Moreover, several business representatives were not invited to attend, or were informed at the last minute, making their participation all but impossible.

Following completion of the hearings and substantial input by academics and the business sector, KMT Legislator Chang Ching-chung, the presiding chair of the legislature’s Internal Administrative Committee, said the agreement could not be amended and had to be adopted as is, raising questions over the utility of the public hearings. The hearings and legislative battles over the CSSTA nevertheless made it impossible to pass it by the end of 2013, as the government had hoped.

Negotiations on the matter resumed in the legislature in March 2014, when DPP Legislator Chen Chi-mai secured the right to plan the agenda for a clause-by-clause review as agreed earlier. However, KMT legislators blocked the process, leading to clashes in the legislature over a period of three days. Meanwhile, civic organizations launched a sit-in outside the LY.

Then, on March 17, with the legislature brought to a standstill and the DPP occupying the podium, Chang, citing Article 61 of the Legislative Yuan Functions Act, announced that the review process had gone beyond the 90 days allotted for review. The agreement should therefore be considered to have been reviewed and be submitted to a plenary session on March 21 for a final vote. […] [Source]

Following announcements as to the inevitability of a KMT victory, the protestors gained entrance into the chamber, where they’ve pledged to remain until March 21. Their occupation can be seen via USTREAM:

As reported by J. Michael Cole at The Diplomat, the numbers of protesters outside swelled into the thousands on March 19, and antagonistic and knife-weilding members of a “gangster”pro-unification party showed up to intimidate.

For visuals of protestors in- and outside of the chamber, along with translated political cartoons and social media support from Hong Kongers, see a round-up from Buzzfeed’s Kevin Tang.

In a post at the University of Nottingham’s China Policy Blog, political science professor Gary Rawnsley responds to a former student’s question about the efficacy of the activist’s illegal occupation:

My interest in writing about these remarkable events was piqued by a question posted on Facebook by a former student: ‘Isn’t there a better way to voice your opinion, guys?!’

As a political scientist with research interests in the media and political communication in new democracies, especially Taiwan, the short answer is ‘no’. A longer answer would include the phrase ‘I am sure there are better ways if you define “better” as “legal”, but are there more effective ways of voicing opinions that may have a political impact?’

The question of legality is tricky and boils down to the old ‘one man’s terrorist is another man’s freedom fighter’ type of argument. Breaking into and occupying the Legislative Yuan is illegal, but such forms of protest are often a weapon of the weak, an instrument of activism used by groups of people who are frustrated that their voice is not being heard through any other channel. […]

Direct action, especially involving illegal activities, are often the final strategy of groups who are frustrated with conventional methods of trying to persuade the powerful of their cause. […] [Source]

Last month, China and Taiwan held their first formal government-level talks. While the meeting was largely seen as symbolic, the two sides agreed to continue deepening economic ties. According to press freedom advocacy groups, Mainland China—already Taiwan’s largest trading partner—has been using its economic clout for media influence in Hong Kong and Taiwan. For more on “economic interdependence” between Taiwan and China, see “Cross-strait Relations: Symbolism as Substance,” via CDT.