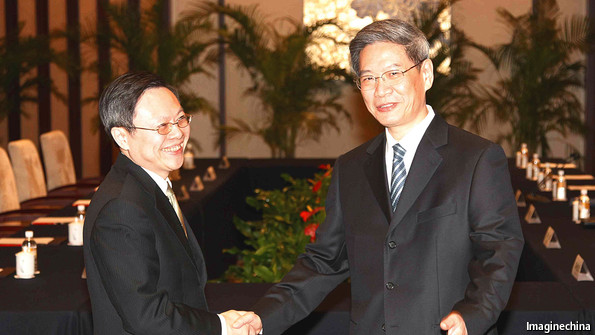 Following Tuesday’s official talks between China and Taiwan, the first of their kind since the Chinese Communist Party’s rise to power more than six decades ago, The Economist looks at the delicate balancing act between the two sides’ respective agendas and cross-strait stability.

Both sides have been wary of talks at such an official level. China’s leaders are loth to take any step that could be seen to legitimise Taiwan’s government. The Taiwanese president, Ma Ying-jeou, has argued for engagement since taking power in 2008, after eight years of rocky cross-strait relations under the Democratic Progressive Party (DPP) president, Chen Shui-bian. But Mr Ma has to walk a fine line between maintaining relations with China that boost Taiwan’s economy and being seen to sell out to the mainland, a prospect that worries even KMT supporters who back eventual reunion with China.

[…] In contrast, China’s president, Xi Jinping, at a regional forum in Bali in October said that the Taiwan issue could not be put off indefinitely, raising concerns that China’s increasing assertiveness in the region might be brought to bear on Taiwan. But Mr Xi’s predecessors found that did not work. In the run-up to Taiwan’s first democratic elections in 1996, China lobbed unarmed missiles into the waters near the island, but its intimidation backfired as Taiwanese voted for a fiercely anti-China candidate. The biggest deterrent to cross-strait dialogue continues to be the biggest difference between the two societies: Taiwanese leaders are constrained by the will of the Taiwanese people.

So China is in a bind. If it pushes too hard, then the Taiwanese push back. If it does not push, there is a risk that Taiwan will assert a separate identity more clearly. At the meeting on February 11th Mr Zhang, the Chinese official, said, “As long as we are on the right path, the destination will not be far.” The problem is that the two sides do not have the same destination in mind. So, for now, Chinese leaders will have to make do with symbolism. [Source]

Although the Nanjing meeting is widely seen as a government-to-government talk between China and Taiwan, both sides generally avoided using titles that explicitly endorse this view. The New York Times’ Austin Ramzy reports:

Just how Mr. Wang would be addressed during the meeting was closely scrutinized in Taiwan. Beijing is loath to take any steps that might be seen as conferring legitimacy on Taiwan’s government, one reason previous talks were carried out by semi-official organizations. Calling the head of the Mainland Affairs Council “Minister” rather than “Mr.” Wang could signal recognition of his governmental status.

Ahead of his opening statement, the head of mainland China’s Taiwan Affairs Office, Zhang Zhijun called his counterpart “Minister Wang Yu-chi” but did not name his ministry, The Taipei Times reported. [Source]

In a speech at Sun Yat-sen’s mausoleum on Wednesday, however, Taiwan’s Mainland Affairs Council head Wang Yu-chi made a potentially controversial reference to Taiwan as the Republic of China. From South China Morning Post:

“The Republic of China, the first democratic republic in Asia established by Dr Sun Yat-sen, has existed for 103 years,” Wang said in brief remarks before officials from Beijing’s Taiwan Affairs Office, Taiwanese journalists and a huge group of mainland tourists.

The statement seemed to contradict Beijing’s official line that the People’s Republic of China – founded by the Communist Party in 1949 as Nationalist forces fled to Taiwan – is the one true China. The party maintains Taiwan is a breakaway province, not a republic, as “103 years” would appear to suggest. [Source]

At Foreign Policy, Isaac Stone Fish asks whether China’s use of economic strategies to draw Taiwan closer will eventually lead to reunification:

Many analysts now see this as the endgame. “Cross-strait interdependence has been an irreversible process, at least in economic, social and cultural terms,” notes Titus C. Chen, an associate research fellow at the National Chengchi University in Taipei. He adds, “The prospects of Taiwan can no longer be separated from those of China.” When asked about the chess analogy, June Teufel Dreyer, an expert on China’s international relations at the University of Miami, offered a different one instead. “There’s a type of insect that a horde of ants will attack. The ants lay their eggs in the insect, and then eat it,” Dreyer says. “That’s what happening with Taiwan.”

[…] For Taiwan, the greatest danger is not military attack, but that Beijing “might exploit its growing power to ‘intimidate Taiwan into submission’ on China’s terms,” Richard Bush, a former head of the American Institute of Taiwan, the private corporation that manages U.S. interests on the island, said in January, according to the newspaper Taipei Times. Chen of National Chengchi University believes “the only option — indeed a risky one — is to engage China, further integrate into her economic and social systems, and change her political and ideological architecture from within.” A liberalized or democratic China would treat Taiwan differently — but drastic political change in Beijing is unlikely. “Barring an unexpected event, the prospects for continued independence in Taiwan do not look good,” Dreyer says. [Source]

Also at Foreign Policy, however, Daniel Blumenthal lists the inevitability of economically driven reunification among five “faulty assumptions” that US policymakers make about Taiwan:

2. Taiwan: Homo economicus. Related to No. 1, the unstated assumption in U.S. cross-strait policy after normalization has been that the Taiwanese are driven mostly by rational, material self-interest. The opening of China-Taiwan economic ties, a process that began two decades ago, was supposed to lead to some sort of political solution as Taiwan acted in its economic self-interest.

Well, Taiwan did invest heavily in China and in the process grew both the Chinese and Taiwanese economies. But as economic ties have expanded, the Taiwanese feel an ever stronger sense of uniqueness. Close contact did not make the heart grow fonder. The more contact the Taiwanese have with China, the more they feel different from the Chinese, including when it comes to the openness of their society and how modern and advanced Taiwan is compared with China. The other issue is a generational shift as fewer Taiwanese feel a historical emotional attachment to China. “Reunification” is now only possible for Beijing if it chooses to start a war.

3. Taiwan is dependent on China’s economy; it must eventually accept unification. This is a cousin of point 2 above. The truth is that Taiwan and China are dependent on each other (and on the United States, Japan, and South Korea) to design and produce high-tech products. They are both highly dependent on other countries to buy those products. Yes, Taiwan developed a very sophisticated China strategy that made the mainland a key link on its high-tech supply chain. But Taiwanese businessmen are arguably the most agile in Asia.

If China becomes too risky or costly, Taiwanese business will move production elsewhere. To some extent this is already happening as Taiwanese business is making large investments in Vietnam, Myanmar, and Indonesia. Taiwan has many options. […] [Source]

During a “tea chat” at Shanghai’s Fairmont Peace Hotel, officials from China and Taiwan discussed the way forward, including the possibility of a summit between Xi Jinping and Ma Ying-jeou. Lawrence Chung at South China Morning Post reports:

The possibily of an unprecedented face-to-face meeting between presidents Xi Jinping and Ma Ying-jeou was discussed by Zhang Zhijun , director of the State Council’s Taiwan Affairs Office, and his Taiwanese counterpart, Wang Yu-chi, as part of the first official talks in more than six decades between the two former civil war rivals.

“The two sides have expressed their respective stands on the issue,” said Wu Mei-hung, a spokeswoman for Wang’s Mainland Affairs Council, after the nearly three-hour discussion.

Several sticking points remain, such as where and in what capacity the two leaders would meet. Ma, who is said to want a presidential summit to cap off his legacy of improved relations with Beijing, has proposed meeting Xi at the Asia Pacific Economic Co-operation forum, which will be held in Beijing this year.

But mainland leaders, who view Taiwan as a breakaway province, want to avoid an international setting that might give the impression that cross-strait affairs are anything other than domestic. [Source]

Tea Leaf Nation’s Yueran Zhang reflects on how the nationalistic views of Taiwan that he acquired growing up in mainland China changed after he visited Taiwan in person.

The underlying message is plain and simple: Taiwan is a part of China, and every Chinese citizen is obliged to defend the dignity of his or her country. To many Chinese, whether Taiwan is part of China is not only a political question — it’s a moral one. After Taiwan’s ex-president Lee Tenghui and then-President Chen Shuibian made a series of remarks in favor of Taiwanese independence in 2003, my elementary school class organized a meeting to denounce them. One by one, we stood up to make short speeches about Taiwan, a place we had never visited or knew much about. What we actually said faded away long ago, but the angry faces and acerbic tones — including mine — are still vivid in my memory. Those moments, combined with statements issued by the Ministry of Foreign Affairs protesting Taiwan’s independence movement, shaped many Chinese’s perceptions about the island: not as a real place with real people living real lives, but as a symbol of our country.

[…] The opportunity to travel to Taiwan and witness the place firsthand has brought about a fundamental change in my own conception of the island. Starting in 2011, residents in China’s large cities could visit Taiwan without a tour group; I took advantage, and made a trip there in August 2012. The second night after my arrival, I stood amidst the crowd in the bustling Shilin Night Market in Taipei, and for a moment I closed my eyes. I smelled alluring Chinese food and heard peddlers calling out in Chinese from behind food stands. I felt as if I were in Shanghai or Guangzhou; a sense of intimacy washed over me. I started to realize how much the people there shared with us; and for a moment, the all-consuming political argument about independence seemed trivial — even humiliating. [Source]