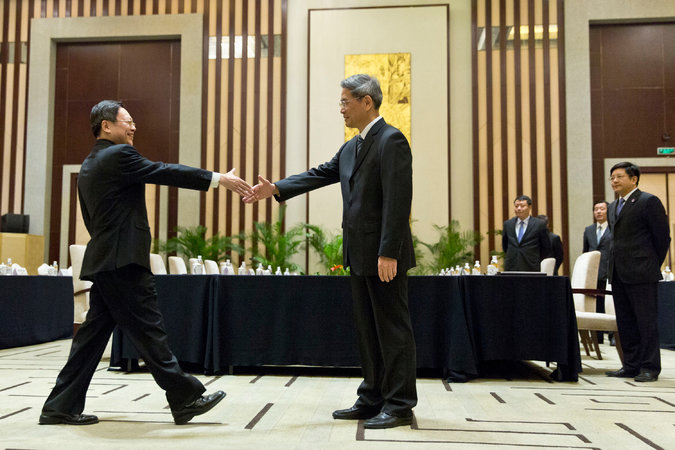 In what has been hailed by some as an indication that long-strained cross-strait relations may finally be warming, yesterday began the first official talks between the ROC and the PRC in 65 years. The Washington Post reports positive remarks from the representatives who engaged in the symbolic meeting yesterday in Nanjing—the city that once served as the Nationalist Party’s seat of government:

Representatives from both sides smiled and shook hands warmly before Tuesday afternoon’s session, the first formal talks since the country split in two in 1949, after a civil war.

[…] Wang Yu-chi, Taiwan’s minister of mainland affairs, called the meeting a “new chapter” in relations between the two sides, and “truly a day for the record books,” according to wire service reports.

Zhang Zhijun, China’s representative, said the two negotiators could “definitely become good friends” but would need to show imagination to achieve breakthroughs in the future, China’s official Xinhua news agency reported. “We absolutely can’t let the relations between the two sides be turbulent again, and even more, we can’t backtrack,” Zhang said. [Source]

Ever since the government of the ROC retreated to Taiwan after the Communist Party took full control of the mainland in 1949, diplomatic relations between China and Taiwan have been carried out only in non- and semi-official capacities. Last October on the sidelines of an APEC meeting in Bali, diplomatic counterparts Wang and Zhang addressed each other by their titles for the first time, and agreed to pave the way for an official dialogue. The Wall Street Journal reports that, while yesterday’s meeting in Nanjing produced few concrete results, it did much to set the stage for higher-level talks to come, and to signal Beijing’s motivations to engage in a cross-strait dialogue:

As expected, the two-hour closed-door meeting didn’t result in a concrete agreement. However, political analysts said the significance of the meeting was that it marked the first time China recognized Taiwan’s top government officials on matters across the Taiwan Strait, indicating Beijing is eager to start a political dialogue with Taipei. Officials handling cross-Strait affairs have previously met but as representatives of unofficial bodies, not in their official government capacities.

To some political observers, Tuesday’s discussions may have set the stage for a meeting between Chinese President Xi Jinping and his Taiwanese counterpart Ma Ying-jeou in future.

[…] “The important significance of the meeting is that it sets a precedent for how future cross-Strait negotiations will be formatted,” said Chang Kuo-cheng, a professor of National Taipei Medical University.

Since the 1949 split, communications between the two sides have been carried out via semiofficial organizations, namely Taiwan’s Strait Exchange Foundation and China’s Taiwan Affairs Office, in the absence of official contacts. [Source]

Elected as Taiwan’s president in 2008, Kuomintang Party politician Ma Ying-Jeou’s has rolled out a series of policies seen as favorable to the PRC, garnering him  degree of criticism at home. With Ma’s final term ending in 2016, his popularity at an all-time low, and the future of Taipei’s stance on cross-strait relations uncertain, The New York Times reports that Beijing may be seizing an opportunity that could soon disappear:

The remaining two years of Mr. Ma’s second and final term as Taiwan’s president offer a short window for Beijing to try to forge closer ties. Mr. Ma’s approval rating has dipped as low as 9 percent over the last year amid concerns about Taiwan’s slow rate of economic growth and a series of missteps, including a failed attempt to force out the legislative speaker.

That could hurt future presidential candidates from Mr. Ma’s Kuomintang, or Nationalist Party, and bolster the electoral hopes of the opposition Democratic Progressive Party.

Beijing “knows that Ma is pro-China,” said Jonathan Sullivan, a China specialist at the University of Nottingham. “It doesn’t know what the next president will be like because the election is two years away.”

The Chinese government may want to use the current window “to try and institutionalize some contact mechanisms and lock in future political leaders in Taiwan,” he said. [Source]

The South China Morning Post notes that President Ma is also eager to leave a legacy of improved relations.

Ahead of the talks and amid a crackdown on foreign and domestic media in China, Beijing refused to issue visas to journalists from Taipei-based Apple Daily and the U.S. government funded Radio Free Asia, and Taiwan said that Mr. Wang would bring up the issue of press freedom on his trip. The AP reports on the rest of the expected agenda for the talks:

While the official agenda for the talks was not disclosed, it was likely to have been heavily focused on trade. Beijing wants to see Taiwan ratify a trade services agreement that would allow the sides to open a wide range of businesses in each other’s territory. Beijing approved the accord more than six months ago but it remains stuck in Taiwan’s legislature, a reflection of public fears of being overwhelmed by their giant neighbor.

[…] Before the start of the talks, Taiwan’s Wang said he hoped to discuss setting up permanent representative offices on each other’s territory and would push for greater Taiwanese representation in international organizations — something Beijing has resisted. [Source]

By the end of the meeting in Nanjing, in which no flags were displayed, attendant officials wore nothing to mark their national and political affiliations, and Beijing reportedly demanded no mention of any sensitive issues, a bilateral agreement to set up representative offices was reached. While much media analysis of the Nanjing meeting stressed its symbolic meaning—aimed at easing tension more than reaching goals and signaling the imminence of higher-level meetings, possibly between Presidents Xi an Ma themselves—commentary from The Diplomat suggests otherwise:

Speculation that the meeting today might lead to what would be an historic meeting with Xi Jinping–hypothetically at the APEC Leaders meeting in Beijing in November–is misplaced. Of course such a meeting is on President Ma’s wish list, but it is unthinkable that Beijing would entertain the idea. Beijing imposes a blanket ban on Taiwanese leaders’ participation in international organizations as part of its strategy to marginalize Taiwan in international society.

Beijing even protests Taiwanese leaders’ requests to transit the U.S. en route to Taiwan’s few remaining diplomatic allies in Central America. Why would it suddenly allow the Taiwan President the opportunity to rub shoulders with President Obama and others? Although Chinese policy toward Taiwan is more temperate nowadays, don’t forget that as recently as 1995 it fired live missiles off the coast of Taiwan in reaction to then-President Lee Teng-hui’s visit to Cornell, his alma mater. Moreover, Beijing continues its military build-up in the proximity of the Taiwan theatre, including substantial missile deployments.

There is no incentive for Beijing to diverge from a successful policy and set the precedent of allowing a Taiwanese president to attend a bilateral or multilateral meeting unless there are credible expectations of a definitive political breakthrough, which is just as unlikely. [Source]