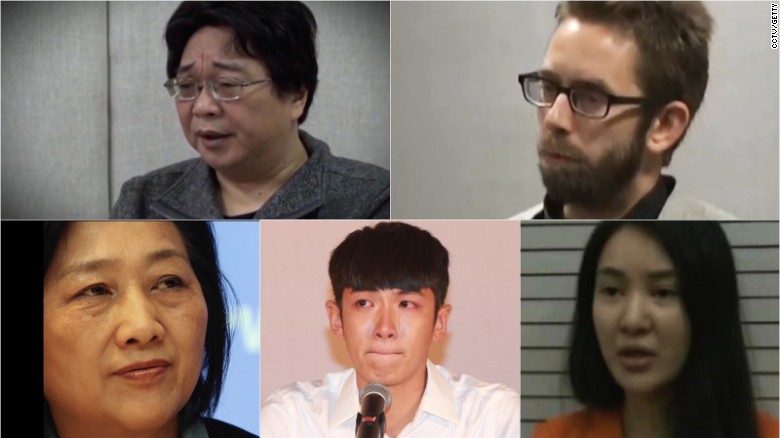 At CNN, Steven Jiang examines the recent trend of televised confessions on China’s state broadcaster, CCTV. Critics argue that they compromise suspects’ rights and the integrity of the legal system in order to crudely reassert the Party’s authority, while some appear to have been obtained through leverage such as threats against family members or access to medical treatment. These concerns have prompted calls for international sanctions against state media.

“Unfairly receiving accusations with no chance of defending themselves – this is not new, but it’s an adaptation to new technology that now makes it possible for everybody to see this,” said Jerome Cohen, a law professor at New York University and one of the foremost Western scholars on China’s legal system.

[…] “It’s a sad thing to see people put before the television and other media, before they have been even formally arrested,” he said. “It’s a pathetic thing and will defeat any chance the Chinese government has of trying to have a good reputation.”

[…] In a country where the ruling Communist Party controls the entire judicial process and the conviction rate in criminal cases is nearly 100%, the TV confessions come at a time when the leadership under Xi is fighting to rein in public opinion in the Internet age and tightening its grip over political dissent.

Pointing to the Dahlin detention and “confession” as an example, observers say it sets the stage for China to pass a controversial law governing the fast-growing number of foreign non-governmental organizations (NGOs) in the country on grounds of national security.

[…] “CCTV’s broadcasts are tantamount to trial by media and they convict people without the court,” said Mo Shaoping, a prominent Beijing lawyer known for defending sensitive human rights cases. “They never air people’s denial of their alleged crimes, or quote us lawyers. It’s against basic journalistic principles.” [Source]

Read more about the detention and release of Peter Dahlin—the Swedish founder of a Beijing-based legal NGO—and the draft NGO law via CDT.

The Black Friday sweep and its aftermath have shown the televised confessions in use as part of a broader media strategy. More than 300 rights lawyers and others were detained in the crackdown, and sixteen now face charges including subversion of state power. As well as the Zhou Shifeng broadcast, state media employed more confessions, mutual denunciations from the suspects, and sustained character attacks, particularly against lawyer Wang Yu and activist Wu Gan. Wang and her husband were also shown on CCTV, distraught over the fate of their son. Media directives have been issued to guide other news outlets. In an overview of the crackdown at the American Bar Association Journal, Abby Seiff discusses the role and effectiveness of televised confessions and other media coverage in the crackdown:

Eva Pils of King’s College in London has extensively researched Chinese law and the status of the country’s human rights lawyers. She says the media campaign was an integral part of the crackdown. “The intended impact is clearly intimidation,” Pils says. “I would call that visual repression—using images of persecuted lawyers to signal to the rest of society: ‘Make sure this is not you. You don’t want to end up in this place.’ Consider the effect these reports and broadcasts have on other members of the legal profession. You might be scared; you might think about exactly how much you would be prepared to use social media to discuss your case or reach out to colleagues,” she says.

[…] One media smear campaign out of a historical playbook suggests that the government narrative is not selling well. [Sharon] Hom of Human Rights in China says, “Even though the online space is being controlled, regulated, monitored, what was interesting was that in the aftermath of that smear campaign, we saw posts … where it was not only family members who spoke out,” she says. In spite of the “ecosystem of intimidation,” a range of messages surfaced questioning the state’s account.

[…] There is precedent for the Chinese government’s current campaign against human rights lawyers. In 2011, dozens of lawyers, activists and human rights workers were targeted. Many, such as prominent rights lawyer Teng Biao, were kidnapped, held incommunicado and tortured. (See “The Most Dangerous Job in Law,” ABA Journal, February 2015.) Then, as now, the government aimed to send a strong message to those considering “subversive” acts.

But the 2011 action also showed how “repression produces effects that are unintended from the perspective of those in charge,” Pils says. “There was a broad expectation that it would have a very, very bad chilling effect,” she says. “What happened was the movement grew. More and more lawyers were joining these groups, were holding meetings … and taking on cases together with more experienced human rights lawyers—even just joining signature campaigns or a social media group discussing a human rights issue was a meaningful first step that could lead to further involvement down the line. This is how the number of human rights lawyers grew from a few dozen or so five years ago to some 200-300 today. It’s too early to say what will happen from the effect of current repression.” [Source]

Seiff also addresses the controversy over the ABA’s original statement on the detentions, which some criticized as too mild. She concludes by quoting lawyer Wang Quanzhang’s letter to his parents, which is posted in full at Human Rights in China. Wang, like Zhou Shifeng and Wang Yu, is among those now facing possible life sentences for subversion. “No matter how despicable and ridiculous we appear to be in the portrayal by the manipulated media,” he writes, “Mother, Father, please believe your son, and please believe your son’s friends.”