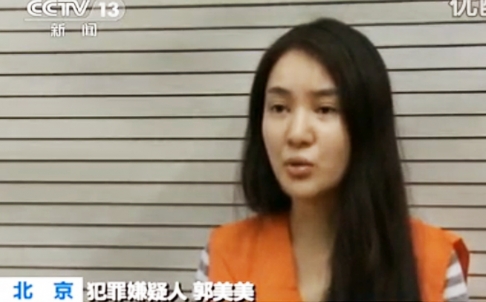 All websites are kindly asked to prominently display Xinhua and CCTV coverage of Guo Meimei, and to actively organize and direct commentary. (August 4, 2014)

On August 4, state broadcaster CCTV aired [Chinese] 23-year-old Guo Meimei confessing to prostitution and arranging gambling events. Detained by police on July 10 for alleged involvement in a World Cup gambling ring, Guo achieved Internet infamy in 2011 after posting photos of her lavish lifestyle from a social media account crediting her as the “commercial general manager” at the Red Cross Society of China. Guo’s claim further sullied the reputation of an organization already the target of public distrust; the Red Cross has been implicated in several other scandals unrelated to Guo. The South China Morning Post has translated part of her televised confession:

The New York Times notes that Guo also offered an apology to the Red Cross and all the people her lie may have affected:

After People’s Daily posted 12 reports on Guo in a row on Weibo without even mentioning the Yunan earthquake this morning, many netizens couldn’t help but drop the F-bomb. “Are these state media nuts? Why the hell do they give Guo more media attention than those earthquake victims?” Many netizens asked.

Even worse, many netizens seem to believe that these reports of Guo are but a PR run by China Red Cross in the time of an earthquake when they need to call for donations again. As many netizens asked: “Is the current heavy media takedown of Gou Meimei a pre-donation run for China Red Cross?” [Source]

Following the deadly earthquake, the Red Cross Society of China is urging the nation to forget about Guo Meimei, and think about those in the earthquake zone. From the Wall Street Journal:

“Numerous people have been fighting through the night for the rescue operation, as now time really is life. Is there anything more important, more urgent, more worthy of the investment of our hearts and souls?” the foundation said on its official microblogging site.

[…] The Red Cross denies any connection to Ms. Guo. Officials announced on Sunday that Ms. Guo has been in no way connected to the Red Cross, according to China’s official Xinhua News Agency.

“So from this moment, forget about her, and put the limited energy and resources into this disaster, ” the foundation said Monday. The people hit by the earthquake will need supplies immediately, the Red Cross notes on its microblog. [Source]