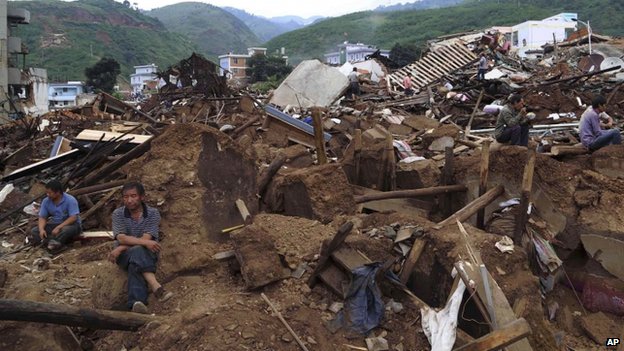 Heavy rains and inaccessibility have hampered rescue efforts following a 6.1 magnitude earthquake near Wenping, Yunnan, the strongest temblor to hit the region in 14 years. So far 398 people have been reported killed and at least 1800 injured, with People’s Liberation Army rescue teams delayed in reaching the epicenter. Tania Branigan and Jonathan Kaiman at The Guardian report:

“The blocked roads and the continuous downpours have made some disaster areas inaccessible for heavy relief vehicles,” Liu Jianhua, a senior local official, told Xinhua.

The news agency said 2,500 troops had been dispatched to the area, in addition to 300 police and firefighters from Zhaotong. Yunnan’s fire department posted on its microblog that it was dispatching 82 vehicles, 445 people and 12 rescue dogs.

Xinhua said the government was also sending 2,000 tents, 3,000 folding beds, 3,000 quilts and 3,000 coats, but that officials were having difficulty getting them to affected families.

The rain is expected to last four more days. [Source]

Despite the heavy death toll, rescue teams have managed to save several people trapped in the debris. From Christopher Bodeen at AP:

Rescuers digging in the debris by hand freed a 5-year-old boy whose legs were injured, Xinhua reported. It also said firefighters rescued 32 people who had been trapped but had retrieved the bodies of 43 residents.

Drenched survivors, including some half-naked, were sitting along muddy roads in the rain waiting for food and medication, Xinhua reported. Medics were reporting severe shortages of medicine and an inability to perform operations on the severely injured, while rescuers said their work had been hampered by continuous downpours and quake-triggered landslides, Xinhua said.

Ma Yaoqi, an 18-year-old volunteer in the quake zone, said by phone that at least half of the buildings had collapsed on the road from the city center of Zhaotong to the hardest-hit town of Longtou. The rest of the buildings were damaged, she said.

“I saw dead bodies being wrapped in quilts and carried away,” said Ma, who arrived with 20 other volunteers Monday. “Some were wrapped with small quilts. Those must be kids.” [Source]

The poor infrastructure in the remote area was largely to blame for the collapse of more than 12,000 houses. From Xinhua:

“Most rural houses in the county were made of brick or wood, were not designed to be resistant to quakes, and many of them were outdated,” said the China Earthquake Administration in a statement.

Ludian is recognized as especially poor by the Chinese government, which includes the county seat on its state-level poverty list.

Each square kilometer of Ludian houses an average of 265 people, twice the provincial average, according to official figures. [Source]

The earthquake has been the leading news story in China, with an emphasis on rescue efforts and the government response. Following the 2008 earthquake in Sichuan, the government was widely criticized for its slow response and for the disproportionate number of children killed when schools collapsed. Brian Spegele at China Real Time reports:

State-controlled China Central Television dedicated two-thirds of its official nightly broadcast to coverage of the quake. Premier Li Keqiang was shown jetting off to the quake-hit area, where he met with local villagers and delivered instructions on rescue efforts.

In one of the most striking images, Mr. Li was shown standing on the side of a road observing as someone apparently injured in the earthquake was rushed by on a stretcher. In another, Mr. Li met an elderly woman from the area, to whom he pledged the full support of the government and party.

[…] Party leaders know how important it is to look like they’re on top of responding to natural disasters. That is particularly true following some of the harsh criticism leaders got after 2008 quake in Sichuan. Revelations that thousands of students died, many when their shoddily built schools collapsed, brought a period of national reckoning and a host of uncomfortable questions for party leaders. [Source]

See photos and video of the earthquake aftermath and rescue efforts, via South China Morning Post and BBC.