Some efforts to flee an earthquake in Sichuan on Tuesday were thwarted by an even weightier power than tectonic plates: China’s zero-COVID policy. Viral videos and screenshots show that some residents of locked-down buildings in Chengdu were prevented from leaving their homes by building managers and pandemic control personnel in white hazmat suits who claimed that evacuation would violate COVID-containment rules. The magnitude 6.8 earthquake killed scores and necessitated the evacuation of tens of thousands more—more than a dozen people remain missing. Chengdu is one of 33 cities across China, including seven provincial capitals, currently under complete or partial lockdown, according to Caixin. It was placed under lockdown last Thursday, with residents instructed not to leave the city unless strictly necessary and restricted to one-person-per-household-per-day allowed out to buy essential supplies. Schools have shifted classes online while the city conducts rounds of rapid testing.

The effort to keep people inside their homes during a deadly earthquake echoes previous instances of overzealous pandemic policy enforcement, such as the asthma death of a Shanghai nurse who was denied treatment at her own hospital because she lacked proof of a recent negative COVID test. On Weibo, netizens expressed outrage at the policy while maintaining a sense of wry humor about the occasional absurdities of China’s pandemic policy: 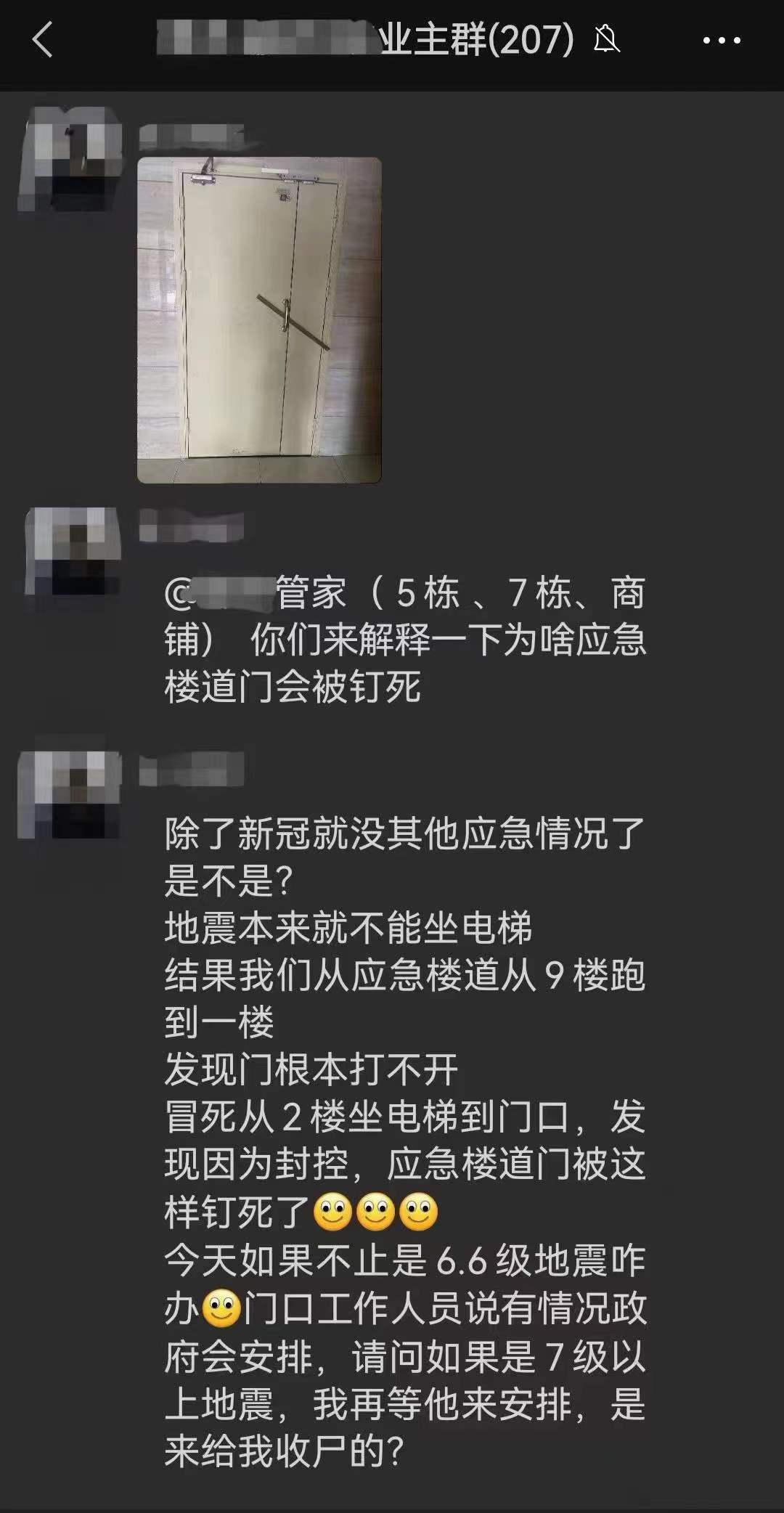 A photograph showing a building’s emergency exit barred shut, with one resident commenting: “There are no emergencies other than COVID, is that it?” 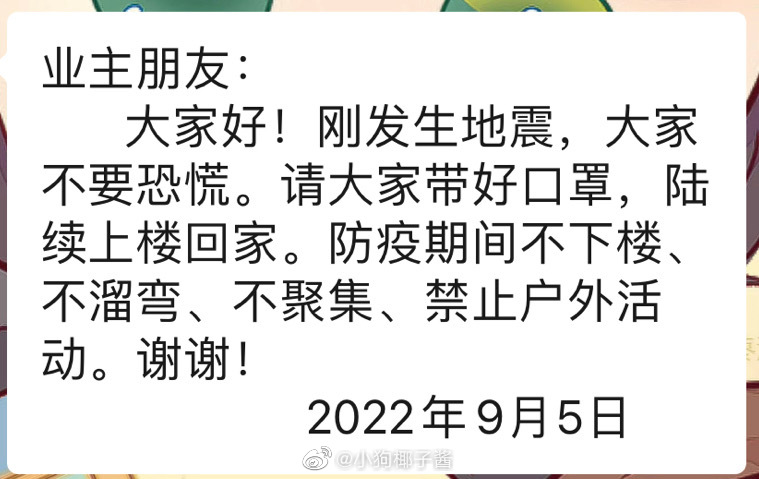 Hello everyone! There has just been an earthquake. There is no need to panic. Everyone should put on their masks and make their way back inside their homes in an orderly manner. During this pandemic prevention period, you must not go downstairs, stroll around, or gather in groups. Outdoor activities are forbidden. Thank you!

你有期待可能性吗：Premise one: the benefits of fleeing an emergency cannot outweigh the sacrifices made in doing so. Premise two:  pandemic policy is an order from on high; “pandemic prevention and control” is a duty; maintain a firm political stance. The logical conclusion: you cannot flee from danger at this time, as pandemic prevention work outweighs all other considerations.

影君子德尼罗：Only one person per household can flee?

貓貓朋克：Once the “Land of Plenty,” [Sichuan] is now a test site for the apocalypse.

一道浮川：What a joke, disaster is on the doorstep but humanity needs proof of a negative COVID test within 48 hours before admission to heaven. [Chinese]

No deaths have been linked to the policy, but a number of social media posts capture the terror of residents who found themselves locked inside during the earthquake. More video, screenshots, and commentary on the incident:

Reporters from People Daily called the property, which is designated as a high-risk area, and confirmed the policy. “The earthquake wouldn't get too serious. Staying at home is the safest,” staff said. pic.twitter.com/MjQMc0W1GZ

At this point, those who wonder why the Great Famine happened in China can see the political logic that caused it play out in real-time.

A glimpse of life in Chengdu posted to Twitter by People’s Daily over the weekend, meanwhile, omitted any mention of the city’s ongoing lockdown, favoring big black-and-whites over “big whites“:

Giant pandas are spotted everywhere in Chengdu, a city world-renowned for being the home of giant pandas in southwest China’s Sichuan Province. pic.twitter.com/pLZXPCFKZb