A performance art piece by a student who sat in a cage to protest a draconian lockdown of the Beijing Film Academy (BFA) recently went viral, and was censored just as quickly. Like many other Chinese citizens, university students have been living under strict lockdowns, and are beginning to chafe at the restrictions—and at administrators’ lack of responsiveness to students’ concerns. With the appearance of the omicron variant and fears of new COVID-19 outbreaks if protocols are relaxed, even more Chinese schools and universities are instituting lockdowns.

On November 22, a performance art piece by a Beijing Film Academy student began making the rounds on Weibo: the student sits in a cage, wearing a face mask over his eyes like a blindfold. A sign atop the cage reads, “Don’t leave the cage unless strictly necessary” (非必要不出笼); an online commentary on the performance notes that the sign is a riff on the school’s unwritten COVID-19 policy, “Don’t leave campus unless strictly necessary” (非必要不出校), interpreting the performance as a critique of Beijing Film Academy’s brute, indefinite lockdown of its campus. 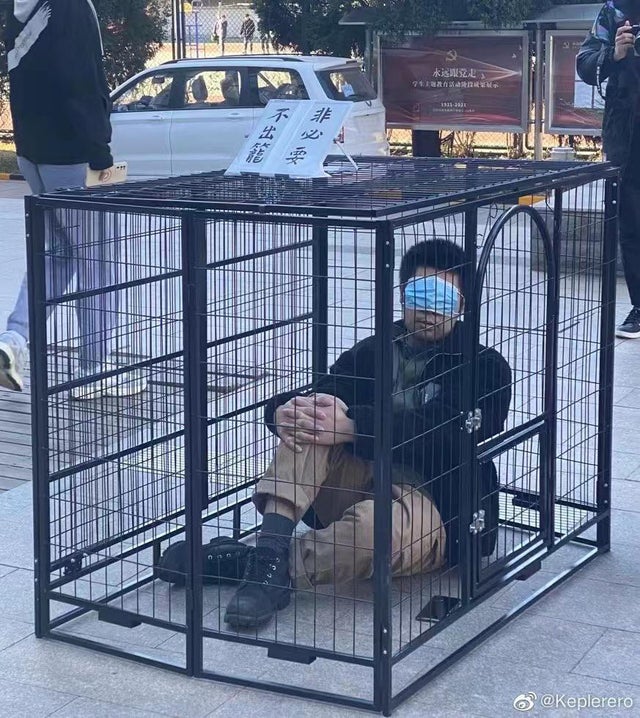 WeChat public account @导筒现场 has posted photos of the performance and the situation on campus: 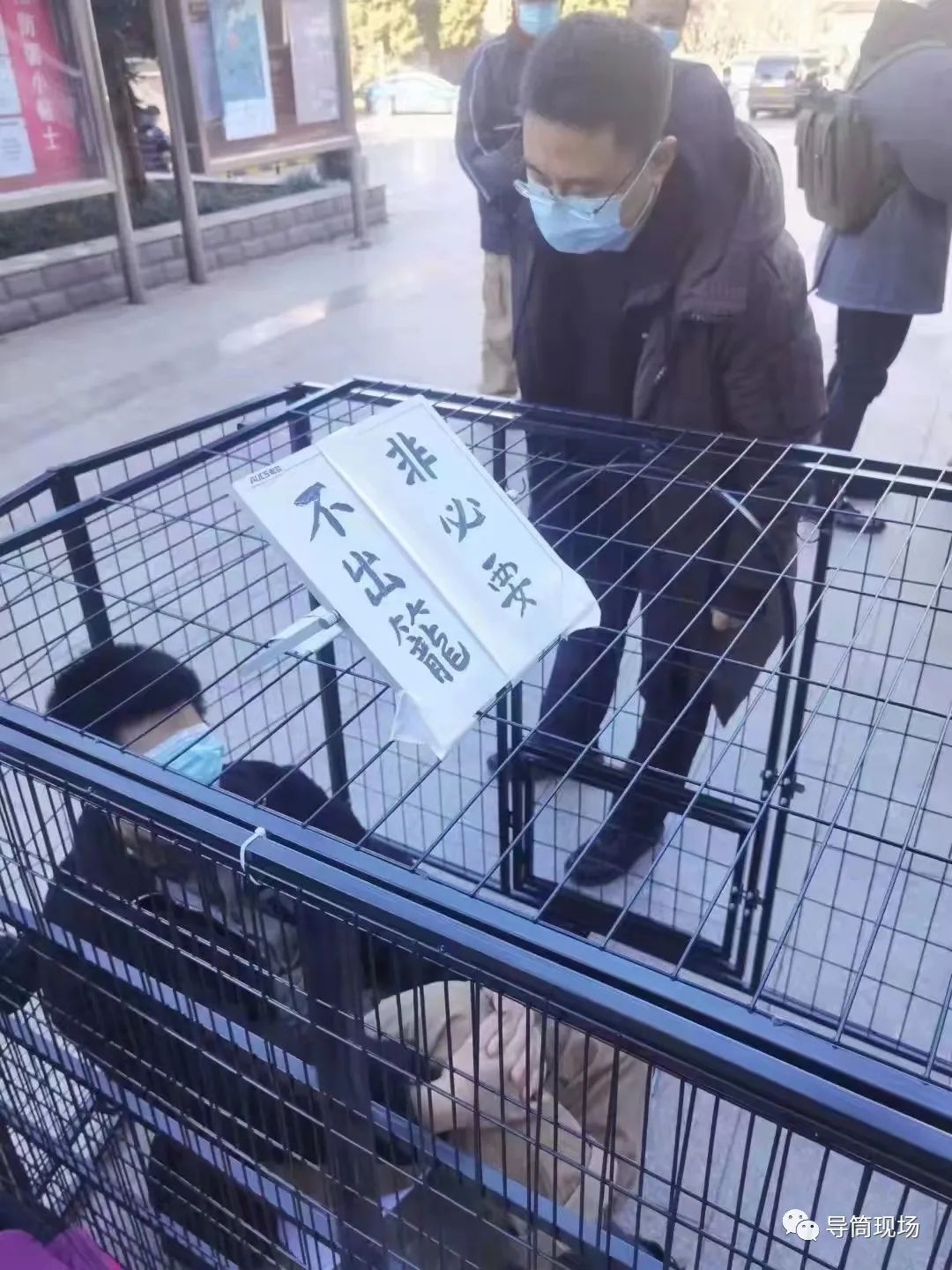 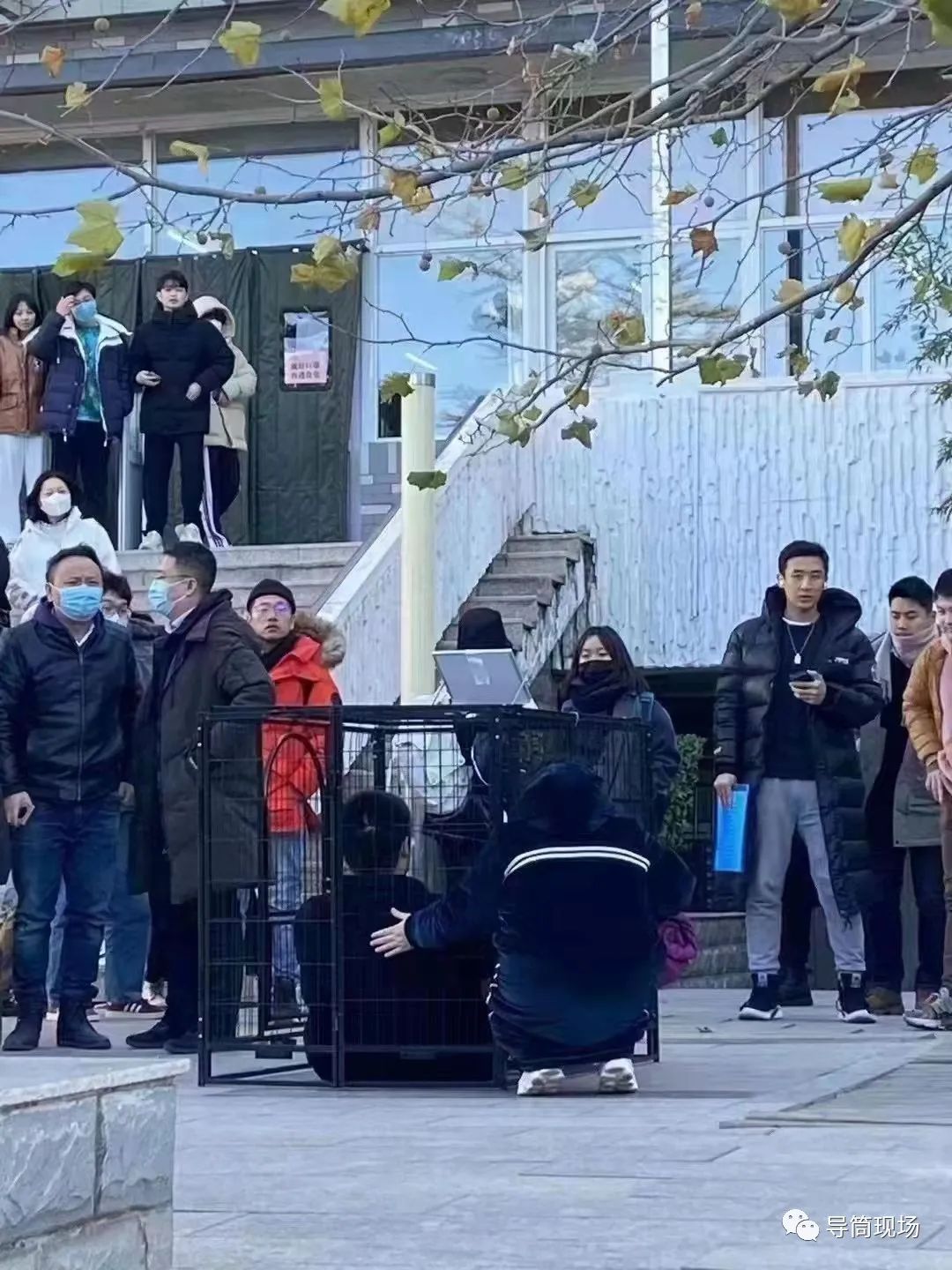 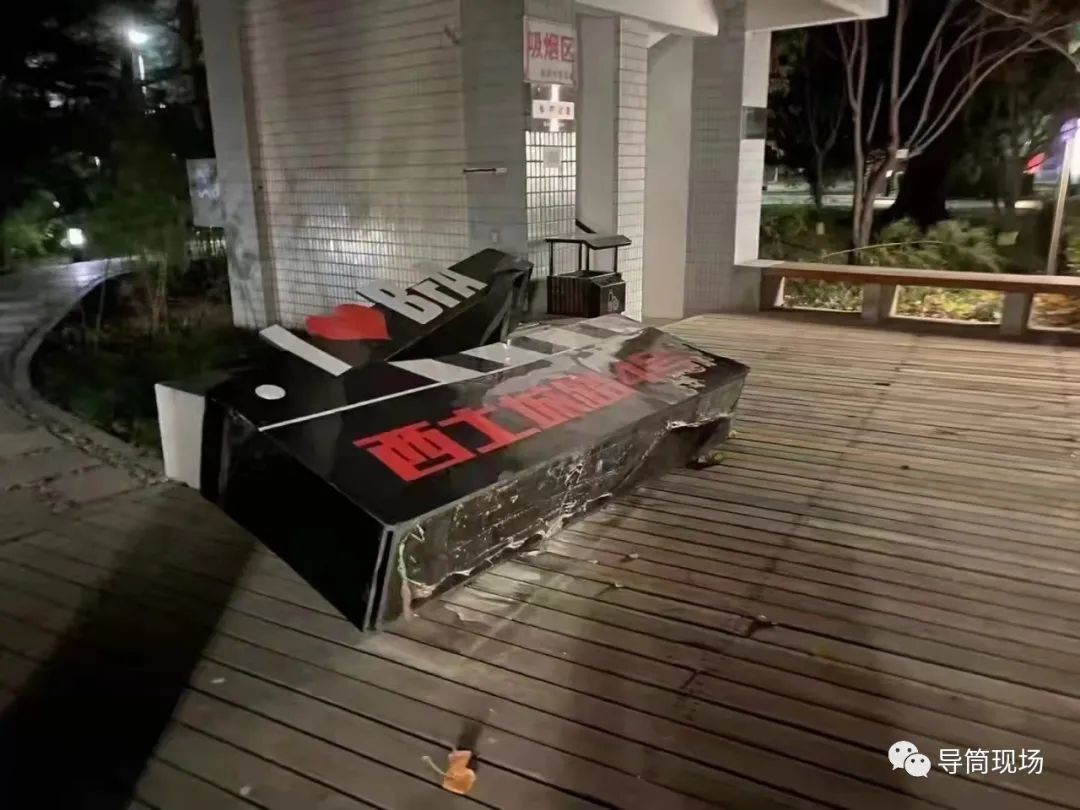 A sign reading “I love BFA” lies toppled on the ground. 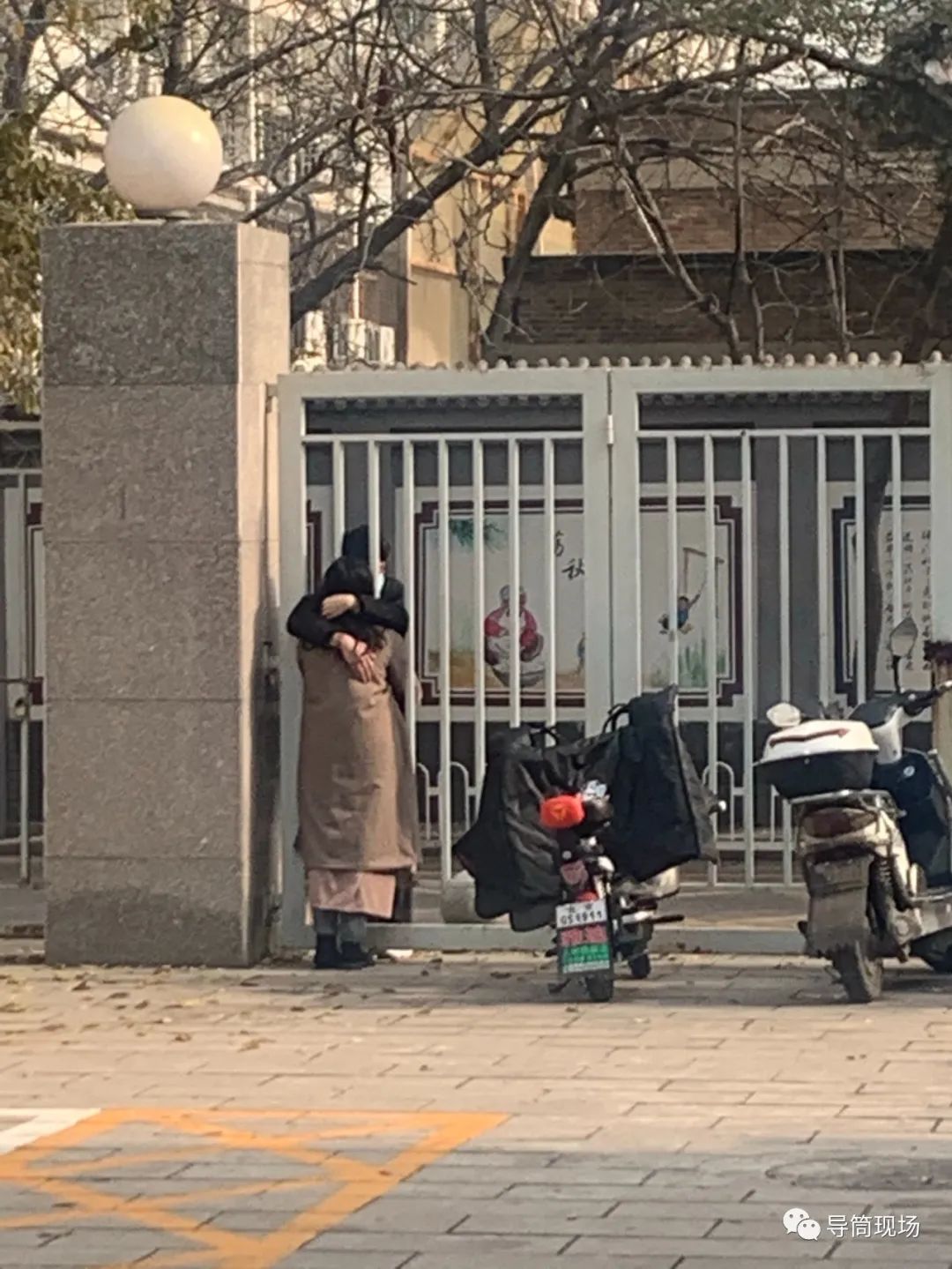 Students embrace through the metal bars of a locked gate at Beijing Film Academy. 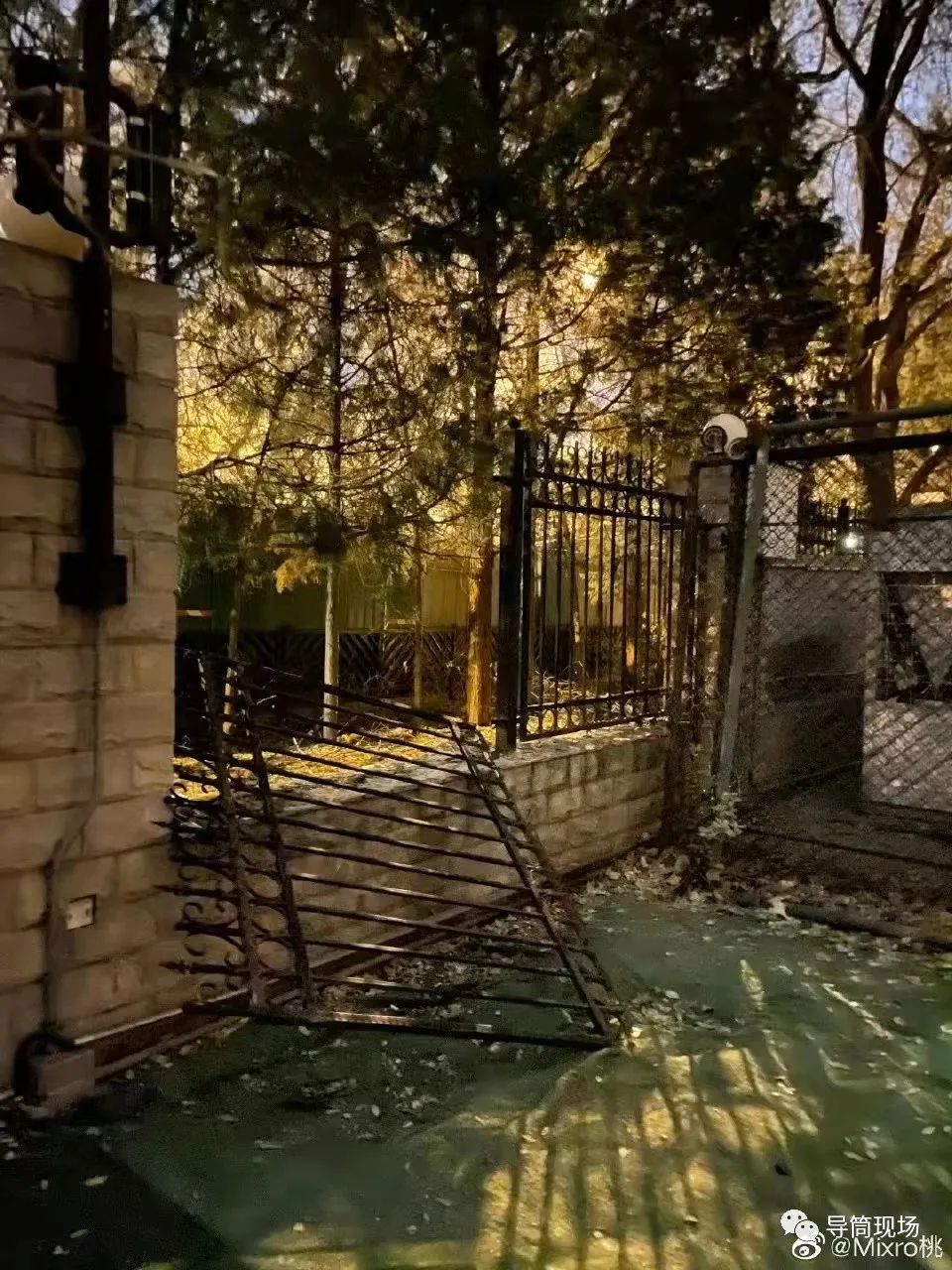 A damaged section of a barred metal fence at Beijing Film Academy.

Another apparently damaged fence at the academy.

According to the commentary below (《关于北京电影学院封校的思考及建议》“Thoughts and Recommendations on the Beijing Film Academy Lockdown”), the school has adopted some of the strictest quarantine measures of all the colleges and universities in Beijing’s Haidian District, a long list that includes China’s top institutions of higher learning. Students at the Beijing Film Academy need to apply for approval from their advisor or the Party branch secretary of their respective department in order to leave campus, but the criteria for what constitutes “strictly necessary” is vague, and approval hinges on the “whims of the administrators.” This process violates student privacy and intensifies conflict between faculty and students, according to the post. 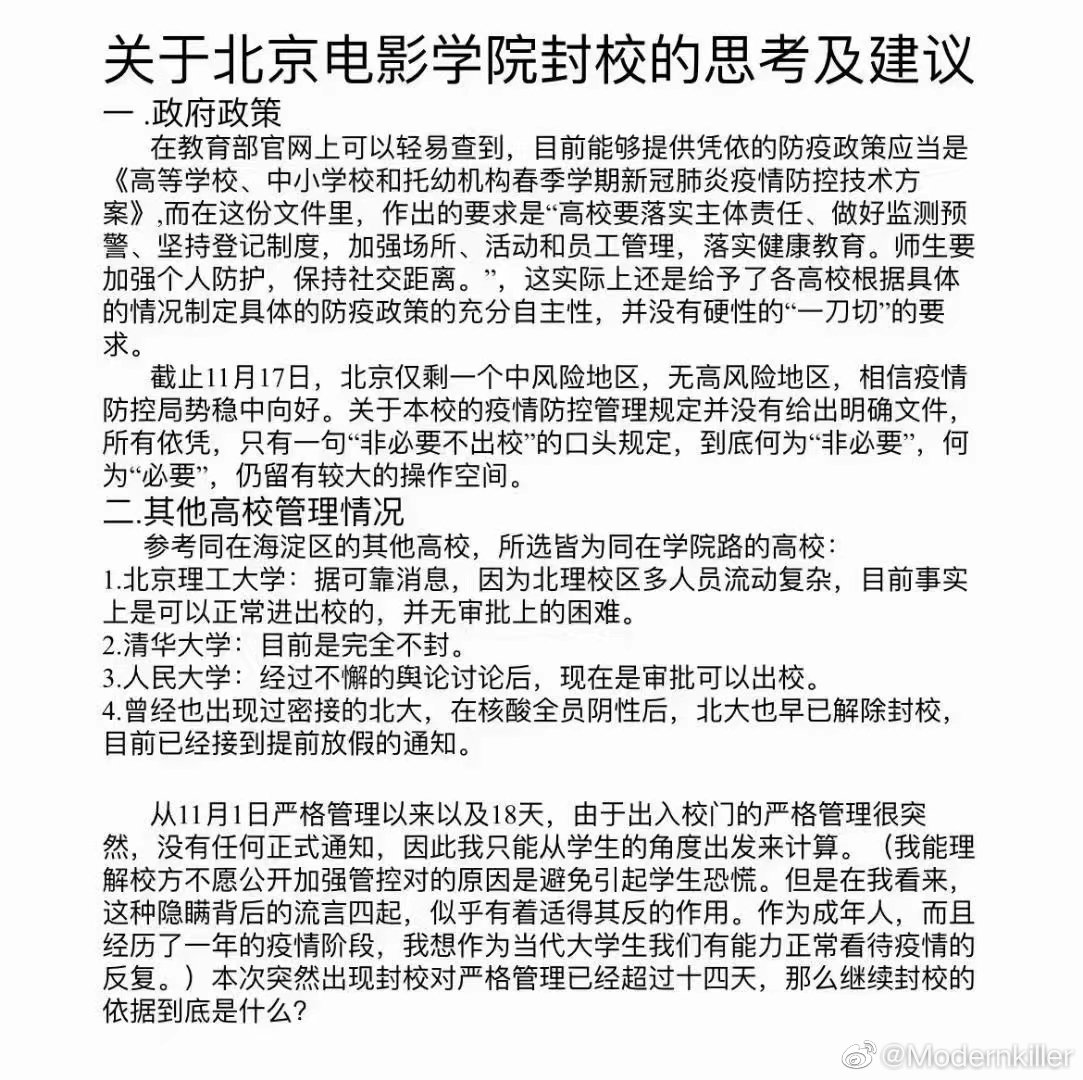 The Chinese text of “Thoughts and Recommendations on the Beijing Film Academy Lockdown” lists the names of other nearby universities that remain open and argues that the lockdown is uncalled for. 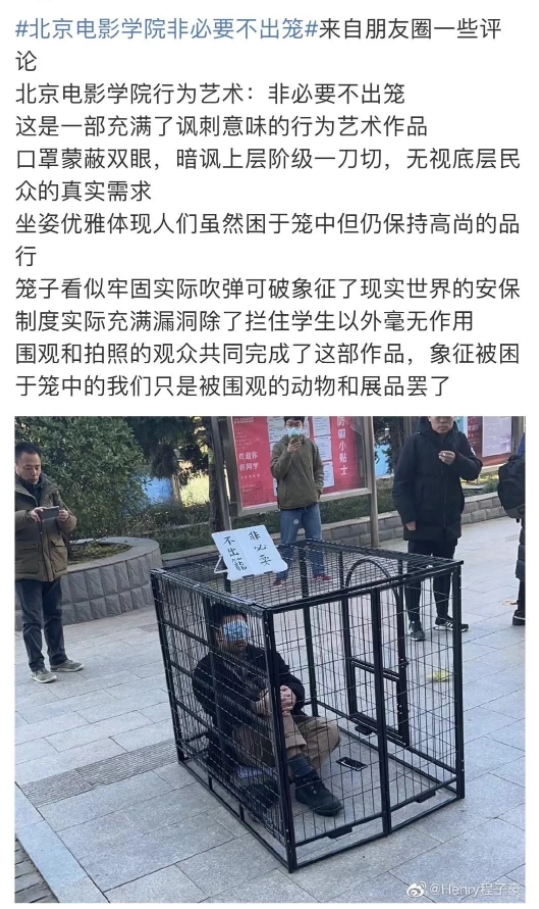 A commentary on the performance art piece interprets it as a satire of the higher echelons’ blindness to the needs of everyday citizens, a paean to the nobility of these “caged” citizens, and a reminder that all cages are permeable and full of “loopholes” that render them ineffective.

The performance art photos, accompanied by criticisms of the Film Academy’s draconian lockdown policy, began spreading on Weibo under the hashtag “Beijing Film Academy, don’t leave the cage unless strictly necessary” (#北京电影学院非必要不出笼#), but the images and commentary were quickly deleted. Now, a Weibo search for “Beijing Film Academy” only yields content about a “Beijing Film Academy girl” who gained 20 jin [about 26 pounds, or 12 kilos] in order to enlist in the PLA Rocket Force (#北影女孩增重20斤入伍火箭军#). 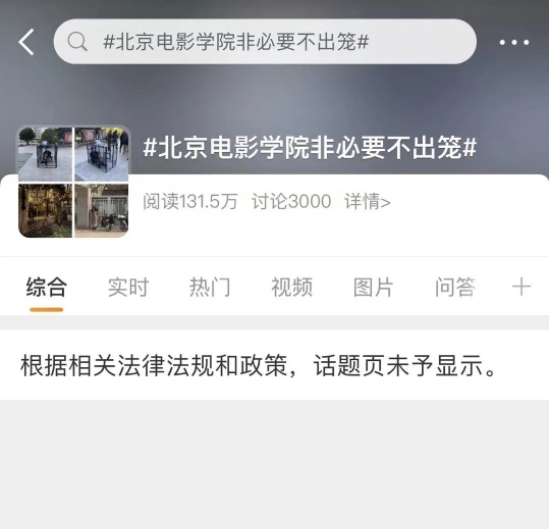 A screenshot of a Weibo search for the hashtag “Beijing Film Academy, don’t leave the cage unless strictly necessary” (#北京电影学院非必要不出笼#) yields an error message: “Due to the relevant laws, regulations and government policies, this topic page cannot be displayed.”

A screenshot from a Weibo user complaining about the performance art content being deleted reads: “#Beijing Film Academy girl gains 20 jin to enlist in PLA Rocket Force#  I was just reading a post about the Film Academy lockdown. How did it disappear so fast?”

The Zhihu page for “What to make of the Beijing Film Academy lockdown?” has also disappeared. CDT Chinese has archived a screenshot of that page:

A screenshot of the deleted Zhihu page. The page raises questions about the necessity of the BFA lockdown (given that the area around the campus is not considered high-risk), and discusses students who live off-campus, shortages of goods on campus, difficulty receiving deliveries, and how coursework and practical assignments are being handled during the lockdown.

As of the publication of this post, the Beijing Film Academy has made no statement on either the lockdown or the performance art piece. [Chinese]