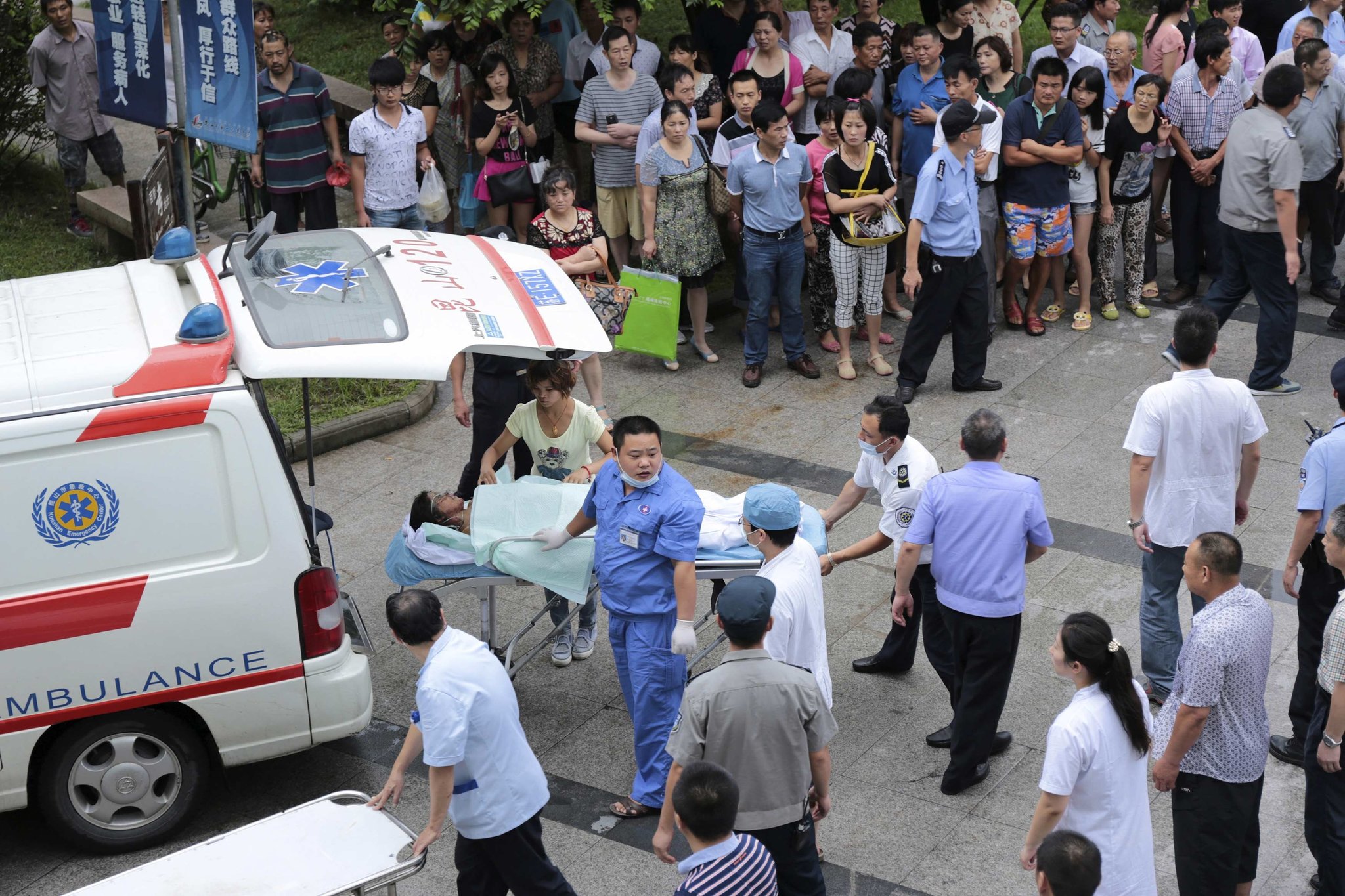 An explosion on Saturday has killed at least 68 people and injured more than 180 others at a Jiangsu factory that makes wheels for US carmakers. Andrew Jacobs at the New York Times reports:

According to the national broadcaster CCTV, 187 others were injured in the explosion, which occurred at 7:37 a.m. in Kunshan, a city not far from Shanghai. Kunshan is home to a number of factories that make components for China’s thriving automotive industry.

The victims, many of them young migrant workers, had just started the day shift, which begins at 7 a.m. and ends at 11 p.m., according to news reports.

The factory, run by a Taiwanese-owned company, Zhongrong, specializes in polishing metal wheel rims. Its customers include General Motors and other American companies, according to the company’s website, which prominently features the slogan “quality and safety.” [Source]

According to witness accounts and a video obtained from the blast cite, many injured workers suffered severe burns on over 80 percent of their bodies. From Xinhua, via iCross China:

Video of the scene broadcast by CCTV showed thick black smoke rising from the factory when the explosion happened. People ran out of the factory with blackened skin and their clothes in tatters. A citizen near the factory said there was a huge sound, and “the door was blew open.” Photographs circulated on social networking sites show charred bodies of victims on trucks or lying on the ground as black smoke billowed from the factory.

Xinhua reporters at the scene said the blast left two large holes in the factory’s wall, with large equipment and pieces of broken glass scattered around. A local radio reporter told Xinhua that she saw an injured worker, whose clothes and hair were completely burned off and his body “as black as charcoal.” [Source]

Authorities said excess dust inside the polishing workshop likely caused the explosion. Lax enforcement of safety regulations and negligence by the factory plant’s management led to the build up of hazardous levels of dust. China Labour Bulletin reports:

The initial investigation into the blast indicated that it was caused by the ignition of metallic dust particles in the workshop. Dust explosions are not uncommon in Chinese factories, where safety measures are rarely enforced and ventilation is often poor.

[…] Although the risks of dust explosions were well known at Zhongrong, safety regulations were poorly enforced, one worker at the plant told Xinhua:  “Checks are usual, but after the checks, no one’s really following any safety rules,” the worker said.

The labour scholar Wang Jiangsong said on his microblog Sunday that:

The massive factory blast in Kunshan exposes a huge black hole in work safety. The factory failed to install equipment or take any measures to prevent the build-up of dust, the safety inspectors were idle on the job and the local trade unions likewise turned a deaf ear.

It is not known at present if there is an enterprise trade union at Zhongrong or to what extent it had any input in monitoring or maintaining safety standards at the plant. [Source]

Charles Clover at the Financial Times reports that President Xi Jinping has ordered a full inquiry into the explosion with the promise of punishing those responsible for the deadly tragedy. Several factory executives have been arrested and placed in police custody since the investigations were launched.

China’s president Xi Jinping has demanded an investigation into a factory explosion that killed at least 69 people and injured up to 187 in the country’s worst industrial accident in more than a year.

[…] Mr Xi called for an inquiry into the circumstances of the accident and vowed to punish those responsible.

[…] A preliminary investigation is focusing on negligence. Safety can be a major problem at factories across China, where workers are often poorly trained and employers often cut corners on accident prevention measures.

Police took away five senior Zhongrong executives to assist in the investigation, officials said, according to Associated Press. [Source]

At the Global Times, Wang Zhefeng notes that the Jiangsu explosion is the latest in a string of factory accidents that have taken place across China since 2010.

On February 24, 2010, an explosion at a corn powder workshop at Qinhuangdao Lihua Starch Co in Qinhuangdao, Hebei Province left 20 dead and injured 48.

On May 20, 2011, blasts occurred at a branch of Foxconn Technology Group in Chengdu, Sichuan Province, killing 3 and injuring 15. The workshop was polishing Apple iPad 2 parts.

On August 5, 2012, an explosion involving aluminium powder at a home workshop in Wenzhou, Zhejiang Province, caused a fire and the collapse of an apartment building, which killed 13 and injured 15.

On April 16, 2014, stearic acid powder manufacturer Shuangma Chemical in Ruhao, Jiangsu Province saw a blast in one of its workshops, which killed eight and injured nine. [Source]