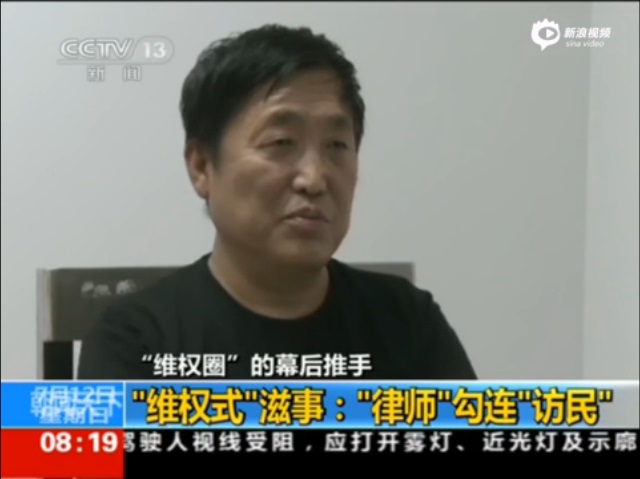 Chinese authorities’ sweeping move against dozens of rights lawyers and activists late last week has expanded further over the weekend. The number of people reportedly involved has surged to over 100 across China, and the offices of three law practices—most notably Beijing Fengrui Law Firm—have been searched. Fengrui lawyers Wang Yu, Zhou Shifeng, Wang Quanzhang, and Huang Liqun, as well as Wang’s husband Bao Longjun and Fengrui administrative assistant Liu Sixin have all been criminally detained.

Amnesty International cautions that “it is difficult to determine who has been detained by the authorities, or taken in for questioning and who may have simply gone into hiding to avoid possible detention,” but estimates that 101 people have been targeted, of whom 25 remain in custody or missing. According to a crowdsourced list tracking the disappearances, as of 7:00 a.m. PDT on Monday lawyers Sui Muqing and Xie Yang, and Christian rights activist Ge Ping are under residential surveillance, while another four lawyers—Li Shuyun, Li Heping, Zheng Enchong, and Zhou Lixin—and 13 others are missing. Another 88 lawyers and 16 others have reportedly been briefly detained or questioned.

Meanwhile, state media has laid out the case against the detainees. Huang Liqun and Zhai Yanmin, a Fengrui employee detained three weeks ago, both appeared on China Central Television to confess. (Televised confessions have caused considerable concern among rights advocates over the past two years.) Verna Yu at South China Morning Post described their alleged wrongdoings:

In an article on Sunday headlined “Uncovering the dark story of ‘rights defence’.”, spanning two-thirds of its second page, People’s Daily said the Ministry of Public Security launched the operation to “smash a major criminal gang that had used the Beijing Fengrui law firm as a platform since July 2012 to draw attention to sensitive cases, seriously disturbing social order”.

The article said the firm’s director Zhou Shifeng, his assistant Liu Sixin, lawyers Wang Quanzhang, Huang Liqun, Wang Yu and her husband Bao Longjun were in criminal detention for “seriously violating the law”. It did not specify a charge. On the mainland, police can detain suspects for up to 37 days before prosecutors approve their formal arrests.

It said “the criminal gang” comprised Zhou, Wang Yu, Wang Quanzhang, Huang as well as Liu, Bao and high-profile activist Wu Gan [background via CDT], who masterminded many plots in the name of “rights defence, justice and public interest”. It accused them of “colluding with petitioners to disturb social order and to reach their goals with ulterior motives”.

[…] People’s Daily said Wu was “a key player” in drawing a huge public outcry over the fatal shooting of an unarmed man, Xu Chunhe, by a policeman in Qingan, Heilongjiang [background via CDT], in May, offering 100,000 yuan (HK$126,000) for any footage showing the incident. Other rights lawyers were accused of involvement. “These lawyers publicly challenged the court … and mobilised troublemakers to rally petitioners … outside the court,” it said. “They are the direct pushers.” [Source]

First, it was the lawyers’ job to hype up an incident, according to Zhai Yanmin, a major organizer of the group.

[…] Then the job shifted to social media celebrities and petitioners. Wu Gan, known for “boldly” stirring controversial incidents, posted messages on his social media account, offering 100,000 yuan (16,106 U.S. dollars) for any video clips that have caught the “truth” of the incident.

Zhai then hired “petitioners” to shout slogans, sit quietly and raise defiant signs to support the lawyers. According to one suspect surnamed Li, she was paid 600 yuan for carrying a sign onsite.

There are others responsible for filming scenes of “mass incidents” and posting them on some overseas websites to manipulate public opinion.

“They have been following the protocol in hyping up such incidents since 2013, when I first entered the business,” said Zhai, adding many of his peers were resentful of the Party and the government, taking pride in being detained by the police.

[…] The suspects, Zhai, Wu, Huang Liqun and Liu Xing have reflected on their alleged crimes and realized their harmful impact, said the statement. [Source]

An editorial from Global Times blasted the alleged conspiracy:

The rule of law is meant to maintain social order and uphold justice. It should promote social harmony, but radical human rights lawyers are intentionally creating conflict between the government and the public. Through false information, they paint the government as a “protector of evil,” and law-breakers as “brave citizens.” Thus, the truth has been blurred as individual cases were portrayed as the “people’s fight against tyranny,” and promoted as “the real defender of people’s rights.”

China is committed to promoting the rule of law. Yet a handful of extremists are making every effort to discredit the government, and that the radical lawyers are the “good guys.” This is no longer the rule of law, but politically-motivated provocation. It is regrettable to see a few legal professionals trying to obstruct the rule of law. If public officials are involved in a case, radical lawyers may appear to stoke public opinion. No country would encourage their lawyers to operate this way. [Source]

More of the official case against the lawyers is translated at The New York Times’ Sinosphere blog and at Fei Chang Dao. The latter, which reported the blockage of Sina Weibo searches for lawyers Wang Yu and Li Heping on Saturday, noted more recent blocks on “Lawyer Chang Boyang” and “Lawyer Jiang Tianyong” as of Sunday. Furthermore, it added, censorship of the phrases “Lawyer Li Heping,” “lawyers disappeared,” and “Black Friday lawyers” had itself been concealed. Users ordinarily receive a notice that “in accordance with relevant laws, regulations, and policies, search results […] have not been displayed”; by Sunday, however, this was no longer shown.

A report on the crackdown from Josh Chin and Te-Ping Chen at The Wall Street Journal included more dismayed reactions:

New York University law professor Jerome Cohen, one of the first American lawyers to work in China after the country opened up in the late 1970s, described the sweep as “insane.” China’s leaders “must be in desperate straits to engage in this extraordinary, coordinated attack on human-rights lawyers,” he said.

Frustration with China’s Communist Party-controlled courts has given rise to a coterie of self-described “die-hard” lawyers who use confrontational tactics in and outside the courtroom in defense of clients whose cases are considered politically sensitive. Such lawyers have sometimes had run-ins with local authorities, but William Nee, China researcher at Amnesty International, said the orders for this week’s sweep likely came from Beijing.

[…] President Xi has made rule of law a cornerstone of his public agenda, but has also escalated restrictions on civil-society groups since coming to power. “The crackdown over the last two years has been so systematic that the attack on human-rights lawyers is the next logical step for authorities—but that’s especially worrying as they are the last gatekeeper of civil society for China,” said Maya Wang of Human Rights Watch.

“Of course, if human-rights lawyers can be neutralized, then the party will have the ideal situation: laws that look good on their face, but are never applied in ways that will interfere with government politics,” Mr. Cohen said. [Source]

The real reason for this crackdown is a rising rights consciousness among ordinary Chinese. Though they know the legal system offers scant protection, many Chinese citizens are willing to file a lawsuit when their civil or property rights are violated. And though they know the result could be prison or worse, they often make a fuss using the Internet and every other means at their disposal.

The stubborn lawyers who defend these stubborn clients represent a challenge to the Party’s claim to stand above the rule of law. And that is why extralegal methods are used against them. Most of the families of the detained lawyers have not even been notified, also in violation of Chinese law. They have simply disappeared into secret prisons.

This mistreatment of legal professionals is one more escalation by supreme leader Xi Jinping in his crackdown on all political dissent. It reveals to the world again that the rule of law in China is simply whatever the Communist Party says it is. [Source]

“Since 2003 the rights defense community in China has been growing in activity, and becoming more and more powerful. The authorities have been worried, and have wanted to find a way to sever it.”

He added: “They’ve been cooking this up for a while. It’s a cleaning out of this whole group of lawyers.”

Were he still in China, Teng may well have been among those targeted.

“They don’t have any way to solve the problem,” he said. “If they lock up 50, new lawyers will stand up. They’ll just keep locking people up, and new people will keep coming.” [Source]

On Sunday, the U.S. State Department issued a brief statement:

Over the last few days we have noted with growing alarm reports that Chinese public security forces have systematically detained individuals who share the common attribute of peacefully defending the rights of others, including those who lawfully challenge official policies. ‎We are deeply concerned that the broad scope of the new National Security Law [background via CDT] is being used as a legal facade to commit human rights abuses. We strongly urge China to respect the rights of all of its citizens and to release all those who have recently been detained for seeking to protect the rights of Chinese citizens. [Source]

Republican congressman Chris Smith, Chair of the Congressional-Executive Commission on China, labeled the crackdown “another step in President Xi’s increasingly muscular campaign to crush dissent,” noting that “the detentions […] set an ugly tone for President Xi’s U.S. visit in September.” A petition at WhiteHouse.gov is calling for Xi’s invitation to be revoked, asking that “all official exchanges with the Chinese government should be suspended until this matter is resolved.”