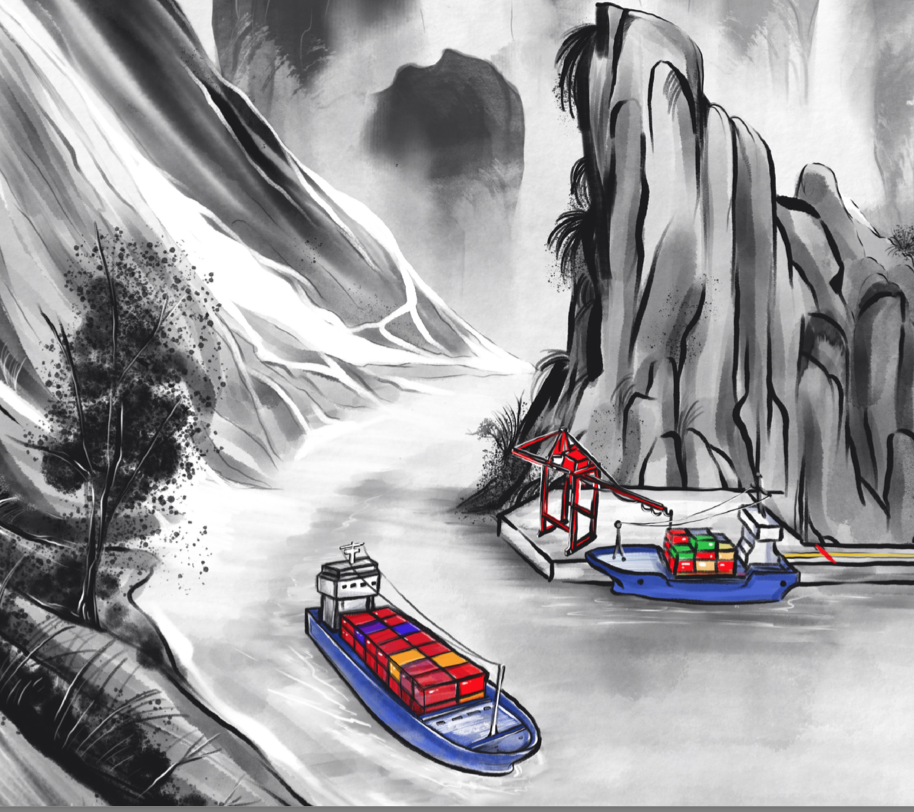 Xi Jinping’s Belt and Road Initiative, a trillion dollar-plus, 65-nation trade and development program that was last year enshrined into the Party constitution, has attracted both international excitement and concern. Touted by Beijing as a “win-win” means to promote global trade and cooperative economic growth and usher the world into a new era of globalization, the massively ambitious initiative has also raised a host of concerns over its potential to expand Beijing’s hard influence abroad. Following recent news that the U.S., Australia, Japan, and India were discussing a joint regional infrastructure plan to rival the controversial Chinese initiative, a new report from U.S.-based security and conflict research nonprofit C4ADS claims that the true aim of the program is to expand China’s military presence and political influence globally. The AP reports:

[…] The report analysed 15 Chinese-funded port projects in Bangladesh, Sri Lanka, Cambodia, Australia, Oman, Malaysia, Bangladesh, Indonesia, Djibouti and elsewhere in the Indo-Pacific region. It concluded that projects are not driven by “win-win” economic development for the individual host countries, as Beijing claims.

“Rather, the investments appear to generate political influence, stealthily expand China’s military presence and create an advantageous strategic environment in the region,” it said.

[…] While there’s no official policy document linking the belt and road strategy to China’s national security interests, Chinese analysts have written that developing the programme and pursuing Chinese security are “intimately linked,” the report said. […] [Source]

AP continues to quote the Lowy Institute’s Peter Cai, who while expressing skepticism about China’s plan to use port projects as a way to advance military goals, said, “We all know that economic influence easily translates into political leverage and power.” The C4ADS report examines 15 BRI-related Chinese-finded port projects in South and Southeast Asia, Africa, and Oceania, concluding:

On the ground, examining the characteristics of China-funded ports and the behavior of Chinese companies— including corporate obfuscation—indicates China’s investments may not be principally driven by the concept of win-win development. Maritime infrastructure investment is inherently dual-use and is capable of furthering both legitimate business activities and military operations. The strategic characteristics of six analytical dimensions that are exhibited across China’s Indo-Pacific investments—having strategic location, a dual-use development model, notable Communist Party presence, significant financial control, limited transparency and unequal benefits, and several marked examples of unprofitability—suggest that Beijing is actively seeking to leverage the geopolitical capacity of its port projects, as discussed by Chinese analysts. Beijing’s port investments yield strategic advantages, exhibit common control schemes, and manifest latent indicators of ulterior motives. As evaluated through this report’s analytical framework, the investments described above are both serving China’s national security interests and altering the strategic operating environment of the United States and its allies. […] [Source]

Foreign Ministry spokesperson Hua Chunying stressed at a daily press briefing that the Belt and Road Initiative is essentially about economic cooperation, and the core concept of the initiative is to promote common development by advancing connectivity in infrastructure and other fields.

The initiative has gained support from more than 100 countries and international organizations, with more than 80 of them signing cooperation agreements with China.

She noted this worldwide support would never have been impossible were the initiative not adapted to the trend of the times and beneficial to people of various countries.

[…] “China has no geopolitical calculations, seeks no exclusionary blocs and imposes no business deals on others,” she said.

“Belt and Road is a mutually beneficial and win-win initiative,” Hua said, adding that it will allow other countries to share opportunities from China’s development and help solve development problems facing the world. […] [Source]

This is not the first time that the political motivations behind the BRI have been questioned. Last year, Pakistani newspaper Dawn reported a detailed summary of a leaked long-term plan for the China-Pakistan Economic Corridor—the proposed link between the “belt” and “road” (i.e., land and sea components of China’s ambitious plan) that has long raised security concerns—which similarly stoked alarm and suggested that China could use the BRI to globally legitimize its autocratic approach to governance.

Meanwhile, ambassadors to China from 27 out of 28 EU member states (excluding Hungary) have compiled a report criticizing the BRI for opacity, putting Chinese companies at an advantage, and hampering free trade in the region. Handelsblatt Global reports:

In their report, the ambassadors wrote that China wanted to shape globalization to suit its own interests. “At the same time the initiative is pursuing domestic political goals like the reduction of surplus capacity, the creation of new export markets and safeguarding access to raw materials,” it read.

They warned that European companies could fail to clinch good contractsif China isn’t pushed into adhering to the European principles of transparency in public procurement, as well as environmental and social standards.

EU officials said China was trying to divide Europe to strengthen its hand in relations with individual member states. Countries such as Hungary and Greece, which both rely on Chinese investment, have in the past shown they’re susceptible to pressure from China. […] [Source]

Prior to this new round of resounding concerns over Beijing’s true motivations, voices inside of China recently warned that the ambitious plan may be financially embattled, as many host nations are proving ill-equipped to make the agreed-upon contributions to their respective related projects. The South China Morning Post’s He Huifeng reports:

Speaking on Thursday at a forum in Guangzhou, capital of southern China’s Guangdong province, Li Ruogu, the former president of Export-Import Bank of China, said that most of the countries along the route of the “Belt and Road Initiative”, as the plan is known, did not have the money to pay for the projects with which they were involved.

[…] “It would be a tremendous task to raise funds for the countries’ development,” Li said.

[…] Wang Yiming, deputy head of the Development Research Centre of China’s State Council, said at the forum that although many belt and road projects were funded by major financial institutions – including the Asian Infrastructure Investment Bank, New Development Bank, China Development Bank (CDB), the Export-Import Bank of China and the Silk Road Fund – there was still a huge funding gap of up to US$500 billion a year. [Source]